Soccer fans from all over the world have gathered in Rio de Janeiro during the World Cup. RioOnWatch asked visiting fans at the popular FIFA FanFest on Copacabana Beach about their perceptions of Rio’s favelas, revealing a mixture of positive and negative attributions, preconceptions based on country of origin as well as changed perspectives after visiting a favela.

“We wanted to see and get to know a favela so we went and walked around Vidigal. We took a taxi there and we wanted to go to the top but our taxi only went halfway so we walked the rest. Maybe we were a bit lost at times but it was still okay. We weren’t unsafe.” Mathieu, France

“The favelas are dangerous. We don’t have time to know one here during our stay. But they’re similar in Mexico. It’s like the three monkeys really: you don’t see them, you don’t speak about them, you don’t listen. This is society.” Diego, Mexico 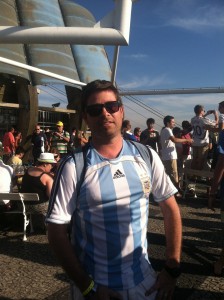 “We haven’t gone to a favela yet but we’re planning to go to Rocinha, the biggest one. We’re not sure where to go but we heard they’re all the same. We already have an idea of how they are. Poor people live there, they’re basically slums. I guess it’s safe. Brazil is a developing country so over the past ten years we heard they choose one, go there and take the police to go in and civilize them.” Mikhael, Russia

“I haven’t been [to a favela] because I don’t have time and it’s too dangerous. You have to go with a guide. I won’t go during my time here.” Okan, Switzerland

“I ate inside of a favela near Barra da Tijuca. It was really big, Rocinha. I was with three Brazilians, they took me to a random place. Before I read about them and they were referred to as slums and poorer neighborhoods. After, I definitely see that it is a poor neighborhood. We all have the connotation that poor is bad and you have to be careful but it’s really not as bad when you’re in there. I didn’t feel unsafe there at all.” John, USA 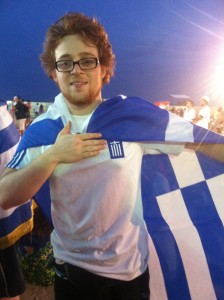 “I went to the Vidigal favela. I thought it would be much worse to be honest. I was expecting second-hand waste materials not concrete homes. Again this is from my perspective. It’s a city within a city. I wouldn’t live there but I felt safe.”  Andreas, Greece

“I haven’t gone to a favela yet. They are dangerous. Very dangerous. Are you offering to take me there? Maybe I would go in a group.” Juan, Ecuador

“I haven’t been and I don’t want to go. They’re dangerous.” Santiago, Colombia

“We haven’t been to a favela but if we had more time here in Rio we would go. Our perception has changed; before, we talked to people from Brazil and that changed our vision. We didn’t know about them as much from home, we hope they will be better and improve.” Elise & Tom, Netherlands

“I have been to a few favelas here. They’re very lively, very open. The people are very kind. I never felt unsafe, maybe out of place but not unsafe. I think that goes with anywhere though, you need to be aware of where you are.” Jerome, Belgium 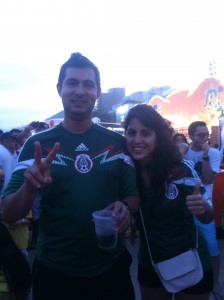 “I haven’t been yet but maybe I will go to the one close to Ipanema. I think the government doesn’t function well there, there are weak social services. They are dangerous. It’s a very beautiful country, with a lot of friendly cool people but it’s still dangerous.” Luis, Mexico

“From what I’ve heard [a favela] is an area with more poor people, with more violence than tourist areas like the beach. I don’t know too much about them, just that the government is trying to clean them up.” Lisa, USA

“If we had time we would like to visit [a favela]. We heard they’re lively, off the grid. There are a couple shows about the favelas on the BBC we saw before the World Cup. They’re artistic and tight-knit communities.” Jack & Louis, England 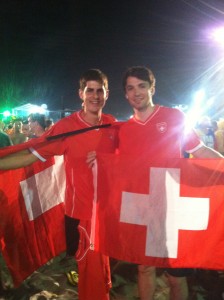 “I haven’t been [to a favela] and I don’t have time. I don’t want to go and look at these people; they’re not monkeys and it’s not a zoo. They won’t come to Switzerland to come and watch me. I hear some things about the favelas but I won’t go. It’s not my home.” Besfort, Switzerland

“Being from Colombia, I know what a favela is. But I think it’s disgusting that people take tours. If you want to see it, do something for them. Don’t go and take photos to post on Facebook. It’s sad to see all the poverty and all the money invested here in the World Cup and not invested in social projects.” Juan, Colombia

“This is my first time in Brazil. I’ve been staying in the Vidigal favela for the last couple weeks and it’s been an amazing experience. I didn’t want to have a normal tourist experience. It’s a bit hard getting around at times without Portuguese but everyone here has been very welcoming and helpful to me.” Ian, Australia 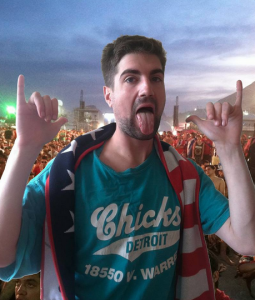 “I haven’t been, maybe I would visit. I think they are better now than before. But I don’t know them, and I can’t really provide an opinion about them, I just know what the media in Argentina tells us.” Fernanda, Argentina

“I knew people who had visited Brazil before, and they said favelas have a terrible reputation, but that’s just because people hear the bad things about the violence and drugs. Other people I talked to had been working in a favela and said they built a lot of strong relationships with people who lived there. They felt that favelas do have problems but don’t have a fair chance at having a decent name and reputation. What I most appreciate about favelas is the strong sense of community. I went to Rocinha for a forró party and the people we went with from Rocinha introduced us to every person there. I really enjoyed that they welcomed us with open arms, that in the largest favela in Latin America you can still have that openness and you can feel safe. I really appreciate that because I feel like a lot of communities in the US are not as tight-knit and personal as a lot of favelas are. I appreciate the sense of community I found there.” Pete, USA