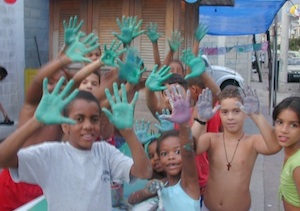 I have always been amazed by solidarity! To me, seeing people getting together to help each other, fight as a group instead of alone and be there for each other is the hope that the world can get better. Even in the presence of pain, disasters and wars, when there is solidarity, there is hope that in future things will improve, some good will come of it all. This feeling, combined with a passion for social causes and Latin America are what led me to Rio de Janeiro to undertake research on mutirão culture in the favelas. Mutirão is quite common in Brasil and has been used for decades towards diverse pursuits.

In Portuguese, the word “mutirão” is used to describe “a meeting place, an opportunity to work together toward a common goal” (Harrison, Huchzemeyer & Mayekiso, 2004). “Mutirão, a word from Tupi Guarani, an indigenous language of Brazil, translates as a group of people who work together to create something that benefits all,” (Habitat for Humanity, 2010). In an urban context, it often means neighbors getting together to construct part or all of their homes together, people helping to build each others’ houses instead of doing it on their own, particularly during portions of building which require a great deal of work during a short period which one family, alone, cannot deliver. This kind of mutirão has been commonly used in past decades by international development agencies and governmental programmes for construction projects. It is also the basis for international volunteer programs like Habitat for Humanity.  It was a way to save money on the one hand, and give people the chance to be a part of such projects, on the other.

So when I came to Rio to begin research on this topic, I was eager to discover this process on the ground. Over several months, I had the chance to observe and interview residents in several favelas. 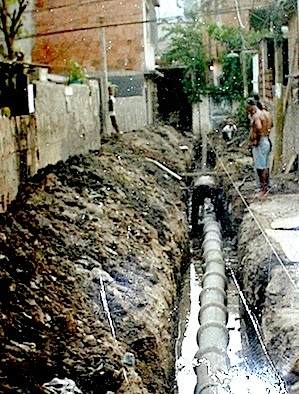 In Asa Branca, a 28-year-old community, mutirão was the modus operandi for over two decades, as families came together in a vacant area of land next to Barra da Tijuca. Solidarity was the key to common well-being. Initially it was used to build houses and roads, as well as access to services off the formal grid, like water and electricity. Later the community developed its own informal sewerage system, maintained to this day, through collective mutirão action.  Resources in the form of money or building materials were often lacking, but when the opportunity presented itself, thanks to income or access to building materials (donated or unused refuse), people came together to build. Favelas are characterized by a constant sense of “in construction,” much of which was done through mutirão.

As time went by by, however, things changed.  In Asa Branca just in the past five years a significant change has been sensed.  Though original families recall the sense of solidarity, many new people come and go, and with this, the sense of community is reduced.  Mutirão is no longer seen as the solution by everyone. “The more income people earn, the less involved they seem to get in the community,” Carlos Alberto Costa, President of the Asa Branca Neighborhood Association, explains. Individual well-being and progress was hard on mutirão and on the community, and sometimes, when people got better off, they even moved elsewhere, renting their houses to others, thus further minimizing the solidarity ties of their community.

Modern times are impacting mutirão culture, and for those who remember “the good old days,” the change may feel severe.  Yet despite Brazil being listed last on “trust” by the World Values Survey, collective initiatives are still a staple across Rio’s favelas. Working together towards a common goal community residents regularly get together to do many things, from reforestation to cooking feijoada, dancing samba, caring for children, constructing additional stories to their homes, paving streets, and much more.

Mutirão in many favelas, perhaps every single one of them, was used at the beginning, to begin construction of the community. And today, mutirão is still commonly used towards a wide variety of pursuits, and often to construct robust slab roofs of homes that will provide strength for additional stories, men doing the construction work together while women prepare food from dawn to dusk on a Sunday. 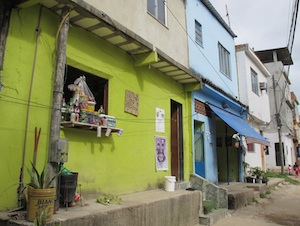 Favelas are often like small villages in the city. So depending on the size of the community and the period when it was built, many residents know each other and there is often a strong sense of community. When this feeling is alive and well, it certainly benefits solidarity: mothers organise themselves to care for each other’s children during the week, men and women can decide to have a better public place and start saving to have it asphalted…

It appears to me that the favelas are entirely overlooked as a source of solutions for urban challenges, that the people who live there should be better known by the formal city around them. I feel both could benefit from each other.  Favelas can benefit from upgrading programs and access to formal city services and opportunities.  But Rio’s “formal city” has much to learn from its favelas too: about mutirão, solidarity, getting together and doing something together for the common good.  About the sense of pride one experiences as an individual and also as a community to see things improve through collective effort.