The government normally takes one of two approaches to its relationship with favelas in Rio de Janeiro: either favelas are a blight on the city and should be replaced, or they can be upgraded on-site. The first approach was popular in the 1960s, when the government began constructing conjuntos residenciais—public housing apartment complexes on government-owned land—to house favela residents displaced by eviction, natural disaster, or, as in the infamous case of Catacumba, arson. The early conjuntos often followed the Le Corbusier model of public housing: high rise residential blocks set in ostensibly green space, often in isolated locations.

This type of housing became infamous in the United States after projects like Pruitt-Igoe were demolished because residents abandoned them. Like their American counterparts, many of the original conjuntos in Rio degenerated due to poor maintenance and lack of social investment or community buy-in. 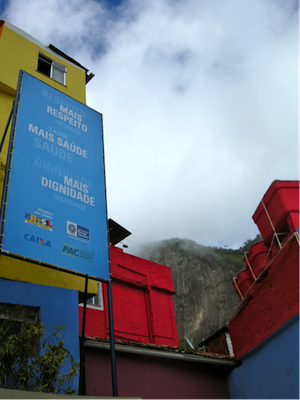 The idea of upgrading rather than replacing favelas gained credence in the 1980s, partly due to the cautionary example of the U.S, and advice from the World Bank. There were small-scale on-site upgrading programs before this, but the government generally cut their funding in favor of favela eradication. The ‘80s and ‘90s saw many ambitious, short-lived projects to incorporate favelas into the fabric of the formal city, culminating in Favela-Bairro, which used local labor to retrofit buildings and create public spaces.

The current administration has adopted both of these approaches to adapting housing conditions in favelas, as a part of Rio’s latest urban renewal campaign.  Homes constructed under the Minha Casa Minha Vida federal program, often dozens of kilometers away, are being used to relocate residents of communities where forced eviction has occurred.  Alternately, the City’s Morar Carioca program is being touted as a new upgrading program, mainly taking advantage of existing construction.

In Rocinha, the Americas’ largest favela, using the federally-funded Growth Acceleration Program (PAC), the State of Rio tried an intermediate approach to public housing, with the redevelopment of Rua 4 (Street 4) by moving residents to public housing apartment blocks within their existing neighborhood. 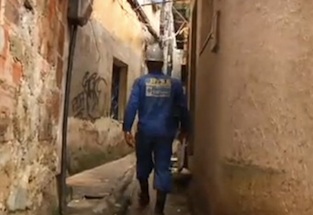 Before PAC began work on Rua 4, it was a 60-centimeter alley with very poor ventilation, known for some of the highest tuberculosis rates in state, connecting Estrada da Gávea and Caminho dos Boaideros, two of Rocinha’s central access roads. PAC set out to build a widened, landscaped road in place of the alley, and a housing project on the site of a former bus depot above Rua 4.

Rua 4 was inaugurated by President Lula in December 2010. Head architect Luiz Carlos Toledo spoke at the opening ceremony: “Rua 4 is…an example of how you can, without abandoning the traditional pathways of a favela, improve them, adapt them to the scale and the topography of the site.” 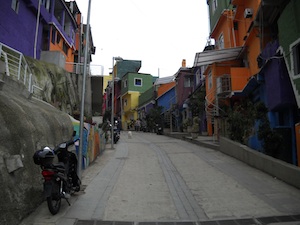 Aesthetically, Rua 4 pulls off an impressive feat for a public housing project. Because many original buildings were repainted to match the blocks, the projects feels like a reasonable continuation of the favela’s texture. The plazas and playgrounds between the blocks face Estrada da Gávea, and street life flows around the buildings. The apartments have open porches, encouraging the permeability of living space that characterizes Rocinha. 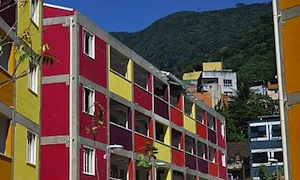 Rua 4 boasts concrete improvements as well. The widened road is closed to cars and has limited access for moto-taxis, leaving it calmer than the constant streams of traffic on either end. Rua 4 also appears to be off-limits to public manifestations of the drug trade: unlike Rocinha’s other major thoroughfares, there are no armed guards or bocas (drug stands) on the street or around the housing blocks.

Widening the street required the demolition of a swath of buildings and evicting or relocating their residents. According to O Globo, the 230 residents were offered government assistance to either buy a new house or rent until the apartment blocks were finished. Those who chose to then received one of the 144 family units. 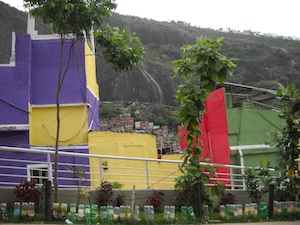 Given the government’s track record with evictions, the claim that the process was consensual demanded investigation. Locating original residents of demolished buildings proved difficult, since most bought houses elsewhere or sold their new apartments soon after moving in. Residents of nearby buildings confirmed that PAC workers registered everyone living in the project’s path, and no one we spoke to had heard of anyone complaining of unfair treatment or insufficient payment.

Residents’ primary complaint is that PAC’s presence on Rua 4 stopped soon after the project was concluded, and that cracked walls and lapsing water supply are already plaguing some residents’ homes. Everything now seems to be up to residents, though these are not the homes they constructed and are in a position to alter but, rather, public housing facilities.  The gardens and public spaces are maintained by the Rocinha Residents’ Association, and the housing blocks each have a superintendent paid through a collective pool. Although the general consensus on Rua 4 appears positive, residents are concerned about all the projects left unfinished when PAC was put on indefinite hold in July. If maintenance is incorporated, Rua 4 may stand as an example of respectfully integrated housing, but it remains to be seen whether the City will follow through on promised infrastructure and sanitation upgrades and upkeep.