This post is the first of three RioOnWatch contributions to Blog Action Day 2014 in which bloggers around the world reflect on this year’s theme: Inequality. Check out our series of articles as the day progresses.

Walled islands of wealth and security have been a part of the Latin American urban landscape since the 1970s. From the inner-city to suburban areas, gated condominiums differ in size, development, and construction typology while the real estate companies, those buying into this lifestyle, and the public authorities continue to influence their expansion.

The spread of this residential development model further increases the socio-economic disparities of an already deeply segregated Brazilian society. The fortresses for the rich become islands of wealth which compromise the permeability between private and public spaces through a set of rigid rules and a lack of equal accessibility, and thereby create new exclusive ghettos. The upper and upper-middle classes are ‘locked’ into their own form of capital-driven privatization, and rarely have to emerge from their developments due to the amenities and employment opportunities provided within them. The spread of globalization further encourages the homogenous lifestyle experienced within these enclaves, while subsequently moving away from the practices of locally-driven development.

The construction boom for gated communities took off in the mid-1970s. Increasing personal mobility due to the automobile and the exacerbation of violence and crime propelled the success of this new residential model in Brazilian cities. Their emergence further coincided with the opening of Brazil’s first shopping malls. This is important, not only because such malls transformed people’s consumption habits, but because they also overtook a series of recreational functions that were formerly attached to city centers and their public spaces, thereby reducing the vitality of traditional street culture.

For the metropolis of Rio de Janeiro, Barra da Tijuca was the place to look for such a lifestyle. This West Zone neighborhood not only offered pristine coastlines, mountain ranges, and a large lagoon, but exclusive leisure clubs for the city’s upper and upper-middle class residents. Due to the real estate speculation that began erupting on surrounding land, club-affiliated housing units began emerging. Originally master planned in 1969 by urbanist and architect Lúcio Costa, who designed the urban plan for the capital of Brasília, the area existed as a garden suburb, in which major roads separated land uses and connected to one neighborhood center. In the 1980s, development took off, and the area was transformed by capital-driven investments. By the 1990s–and two decades into a stagnant state economy (which lasted from 1975-2005)–public authorities had taken a back seat to the urban development taking place here.

Two types of residential communities can be observed. The first caters to the upper-middle classes where fenced high-rise buildings are loosely grouped together, with adjacent paths and roads generally considered public. For the upper echelons of Rio’s elite, hotel-like amenities and services are supplied within the tightly-secured complexes for the residents’ exclusive use. These include swimming pools, sports fields, tennis courts, fitness and party rooms, restaurants, beauty parlors, supermarkets, and even schools. Both types often offer their own private bus service during commuter hours to the city center for those who work downtown. Thus, these facilities leave their occupants with little reason to venture out from their fortresses of security, luxury, and comfort. At the same time, however, they reduce the value and vitality of such social spaces because of the restrictive and controlled interactions that take place within them. Despite this underpinning logic, however–as with all of Rio’s regions–Rio’s lower socio-economic classes still occupy a space within it. 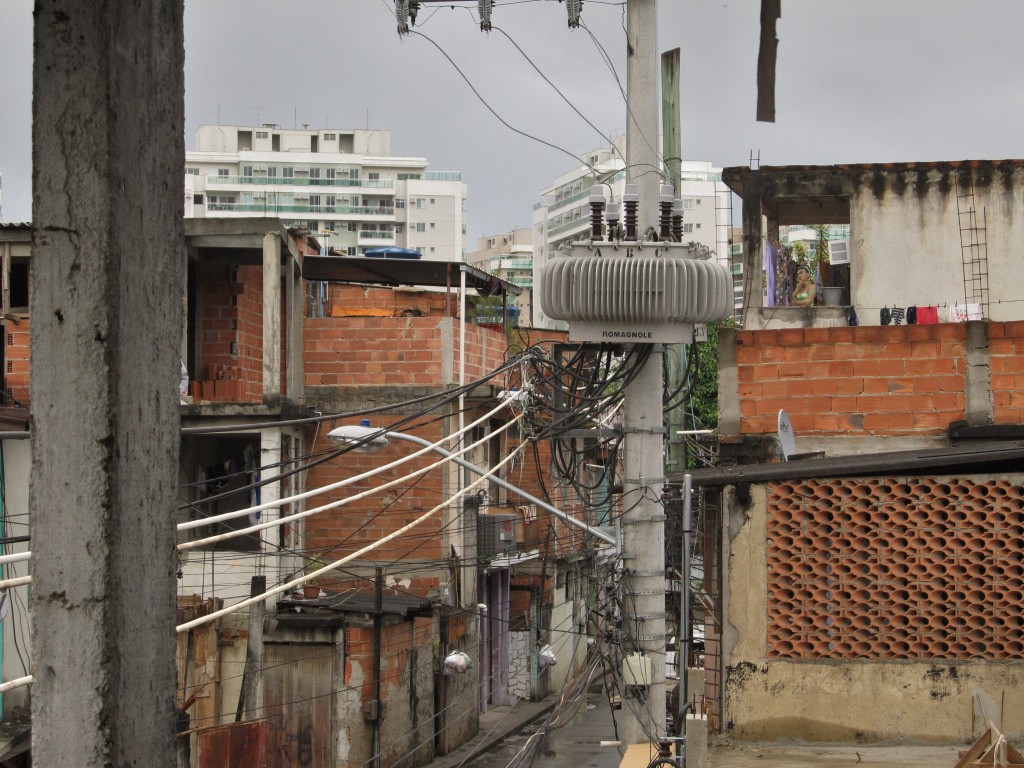 Every spontaneous favela in Rio can trace its origins to nearby employment opportunities, and Barra da Tijuca is no different. Whether Vila Autódromo and Arroio Pavuna which were settled before Barra da Tijuca was even named, by fisherman living a subsistence life, or Asa Branca and Vila União de Curirica, which were founded in the 1980s as construction jobs began to flood the area.

Today, Barra da Tijuca represents an important job market for nearby favela residents, particularly within the extensive service and construction industries. And the area’s favelas that have expanded from their origins some 30-40 years ago, by servicing the growth of Barra, are now threatened by the sprawling condominium developments encroaching on their territory. Rising land values associated with their proximity to the new Olympic Park make them prime targets for forced eviction. And their permanence on the landscape is threatened with construction of the increasingly questioned TransOlímpica BRT line. With growing threats to the region’s favela communities, often based on their design being assumed deficient, the differences between the gated and favela communities–those beyond the infrastructure services available to each group–become increasingly evident. 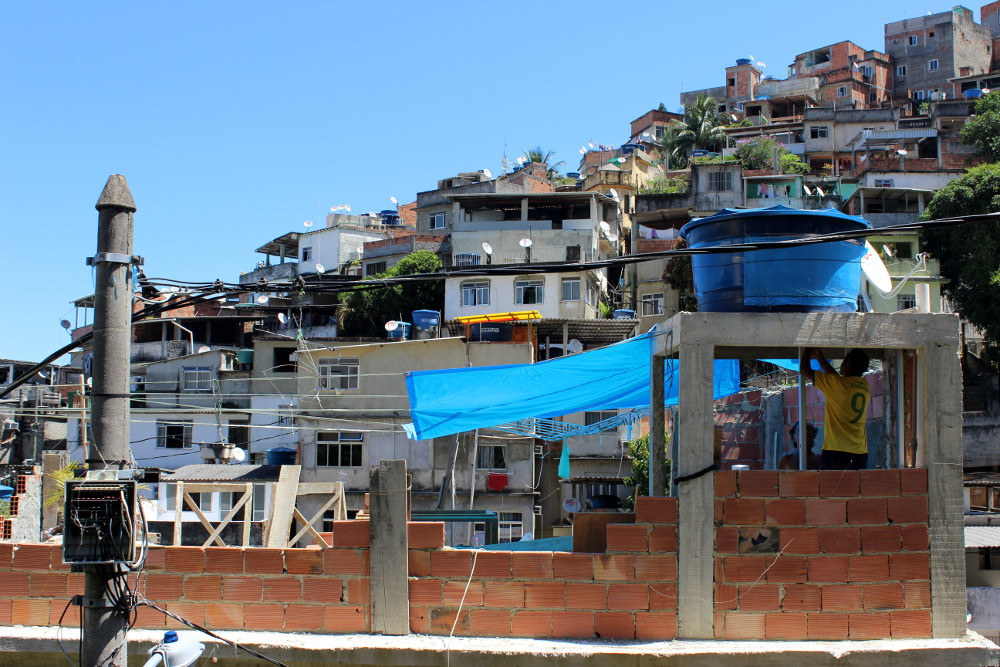 Given the tendency of gated communities to spread in a sprawling fashion in response to perceived fear of “the other,” and the simultaneous desire for status, the favela development model is largely more sustainable. Its unplanned, ad-hoc nature arises out of an under-met need for affordable housing, and construction is done with solid, permanent materials including concrete, bricks and reinforced steel. Furthermore, homes are adaptable for further vertical expansion based on changing family units. Thus, the dense, low-rise, residential and commercial developments are centered around pedestrian activity and lend to a vibrant street culture.

Fluidity exists between private and public space exhibiting strong community and family ties. Though alternative transit means are used more frequently than the private car, ownership importance is gaining ground based on the connotation of social success imported from the globalized lifestyle. Nevertheless, resourcefulness, resilience and vitality are noticeable within favela communities; residents make do with what they have, and adapt to their surrounding conditions in such a way that allows them an improving quality of life.

Based on the hosting of two mega-sporting events, Rio de Janeiro’s authorities have stated as their goal the transformation of Rio into a “global city.” The major changes implemented in the name of this objective have led to the eviction of over 19,000 families from the city’s favelas, a large proportion of which are in the Barra da Tijuca / Recreio region. Many such families have been relocated to public housing built by the Minha Casa Minha Vida (MCMV) federal housing program, over half of which is located in distant West Zone neighborhoods, double the distance from Rio’s downtown (over 2 hours by public transit) as the Barra da Tijuca-area communities (in the neighborhoods of Curicica and Jacarepaguá) are today, and often over an hour further from where these communities are in relation to their current employment center in Barra. MCMV housing units are also increasingly associated with militia activity.

Ironically, MCMV public housing development is modeled on the ideal of gated condominiums. It moves away from favela-style incremental production that grows accordingly with its occupants and instead adopts the construction of easily replicated housing units. The resulting single-use apartment buildings are unable to adapt to the changing needs of their residents, whose family and strong interpersonal ties are more intense and place-based than their wealthier compatriots, as well as forbidding the inclusion of commercial establishments on which many favela residents depend. The lack of inviting recreational and gathering spaces restricts community life and previously understood neighborhood functionality. It becomes harder for these lower-income residents to adapt to their new surroundings because they resemble little of what they are used to. Their socio-economic status already places them on the periphery of society, yet forcing this group into a homogeneous development model further compromises their quality of life.

Barra da Tijuca’s gated communities sell a packaged lifestyle of safety, leisure and comfort. The separation between residential and commercial activity reduces the potential of the public sphere and the existence of a vibrant street culture, while the walls, fences and gates segregate its occupants resulting in exclusive housing ghettos. The booming job market for lower-class citizens facilitates the separate worlds that continue to exist side by side. Following market-based principles with no regulation to guarantee the vitality of public spaces or housing affordability, developers will continue their pattern of sprawling construction because it banks them the highest possible profit, especially as land values continue to skyrocket around the Olympic Park. In parallel, as Rio authorities strive to make the changes they want to see prior to the city hosting its second mega sporting event, officials continue razing favelas while inaugurating unsustainable and questionable public housing modeled on the same principles of exclusion and isolation.

Caitlin Dixon holds a Bachelor’s Degree in Geography: Urban Systems from McGill University, and has a keen interest in exploring the creation and use of public spaces in different urban landscapes.