During the month of September 2015, a team of engineers, masons, and workers in Vale Encantado began the construction of the community’s second biodigester, this one designed as the first step towards a sewage treatment biosystem for the community. Vale Encantado, tucked in the Tijuca Forest near Alto de Boa Vista, Rio de Janeiro, is home to 27 families and boasts picturesque views of the highest point in Rio, Pedra de Gávea, and Barra de Tijuca beach. However, like about 66% of the city of Rio de Janeiro, their untreated sewage runs directly into nature. In addition to the community’s sewage, that of the pool club and condominium complex on the upper border of the neighborhood also contributes to the open sewage running through Vale Encantado. The biosystem project, implemented by a group from Rio’s Pontifical Catholic University (PUC-Rio) and financed by FAPERJ, aims to change that. Once completed, the biosystem should be able to treat all sewage generated by the community, including water from washing machines, toilets and sinks. 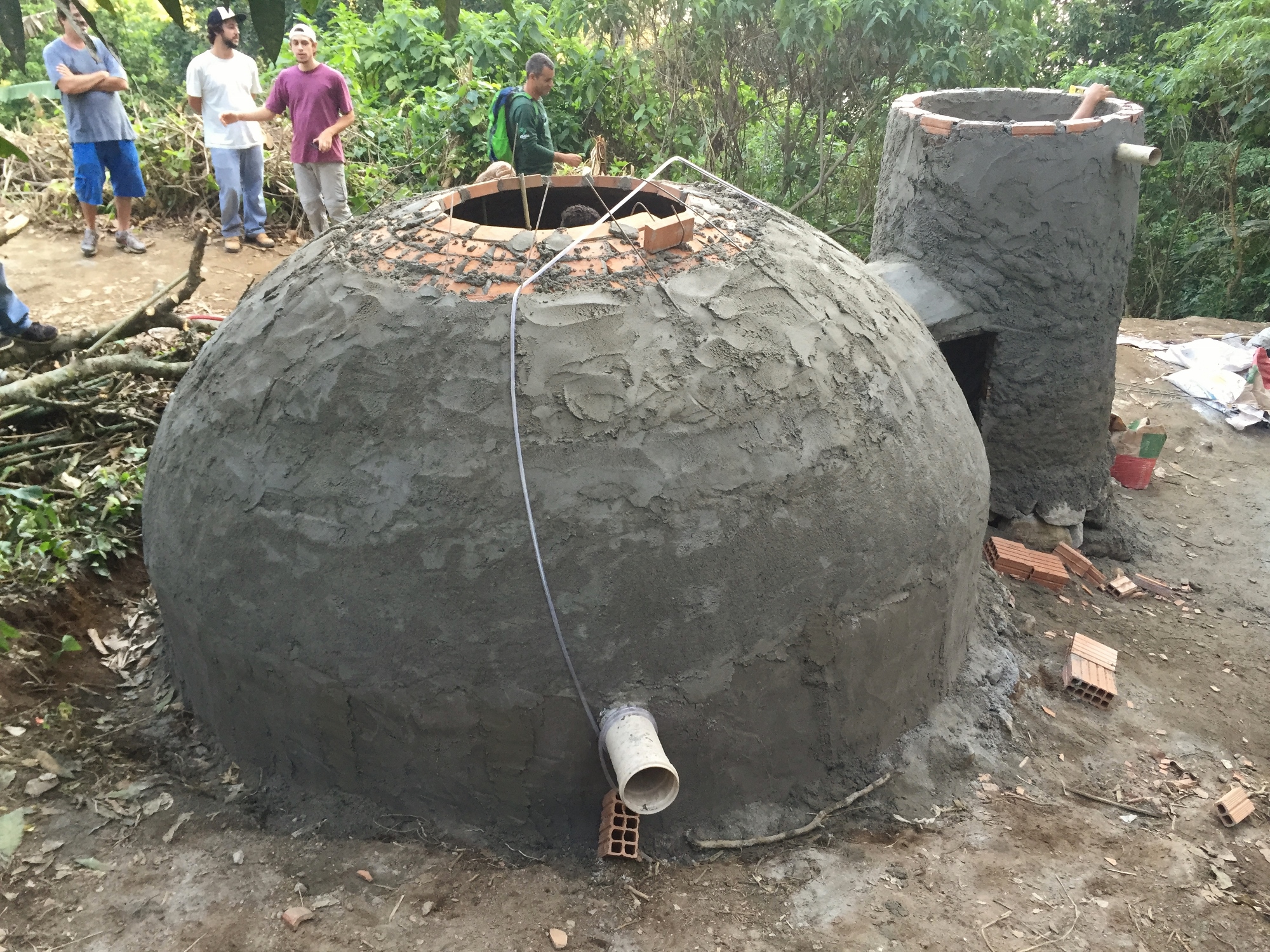 Biosystems are an emerging technology designed to treat sewage in a sustainable way with no harsh chemicals or waste byproducts. The type of biosystem under construction in Vale Encantado treats sewage in two steps. The first step is the biodigester, an anaerobic tank where bacteria digest the organic matter in the sewage, producing biogas, a liquid component, and a solid that remains in the tank. The biogas produced by the biodigester can be used for energy or cooking, so the liquid flows to the second step, in which a system of plants with long roots purifies the water. The final product is clean water that can flow into the forest with no contaminants or chemical treatments.

The biosystem is on track to be completed by the end of October. The next task will be to construct the sewer network connecting houses to the biodigester. The biogas produced in the biodigester will be used to provide gas for one household in the community.

Led by engineers Leonardo Adler and Tito Cals from PUC-Rio, the team behind the biosystem researched alternative solutions for sewage treatment and visited successful small-scale sewage systems across the state of Rio de Janeiro. Coordinating the construction on-the-ground is Valmir Fachini, the Haiti director of NGO Viva Rio, who has worked extensively with biosystems since the 1990s. The team also consists of Otavio Barros, community resident, president of the Vale Encantado Residents’ Association and head of the Vale Encantado Cooperative, Baltazar Morgado, from Viva Rio, who has extensive experience with sanitation projects, and hired masons and construction workers, many from the community itself. João Pedro is a 19-year-old resident of the community, hired to prepare the site for construction. When interviewed, he said he thinks the project is “really cool.” 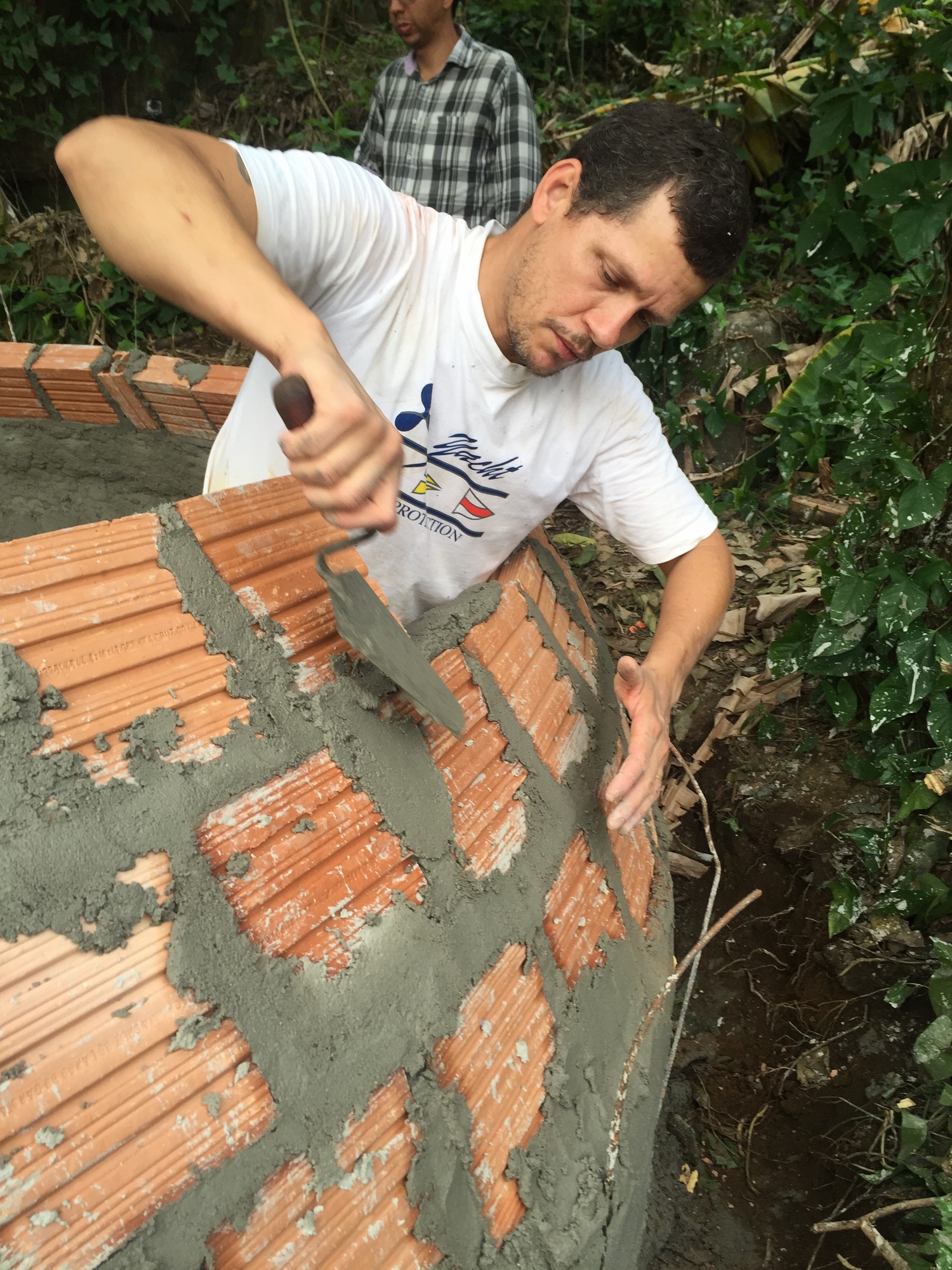 This is the second biodigester project in Vale Encantado. The first, completed in 2014, treats the organic waste from the community’s cooperative restaurant and powers its stoves. Vale Encantado has many other sustainable initiatives underway including the cooperative restaurant, which uses locally-grown food, and a community-based ecotourism project. The neighborhood also serves as a principal case study and initial pilot in the development of LEED-UP (LEED for upgrading informal developments).

The Vale Encantado Cooperative is currently seeking funds to connect all homes in the community to the final sewage biosystem. To help, get in touch with them here. Catalytic Communities, the US 501[c][3] nonprofit that runs RioOnWatch, can also act as fiscal sponsor for English-language or US-based donors who would like to make a donation online here. Simply message donate@catcomm.org informing us that your contribution is earmarked for “Vale Encantado biosystem.”