Last weekend students from two universities joined residents of Vila Autódromo to revitalize the community park, or Parquinho. Participants tied colored ribbons around trees, painted the jungle gym, seesaw and swing-set, and planted a garden using recycled materials. Following the demolition of the community’s ping-pong table early this month and the lightning evictions of October 23 when bulldozers destroyed five homes, the Parquinho is one of few public spaces still in tact. 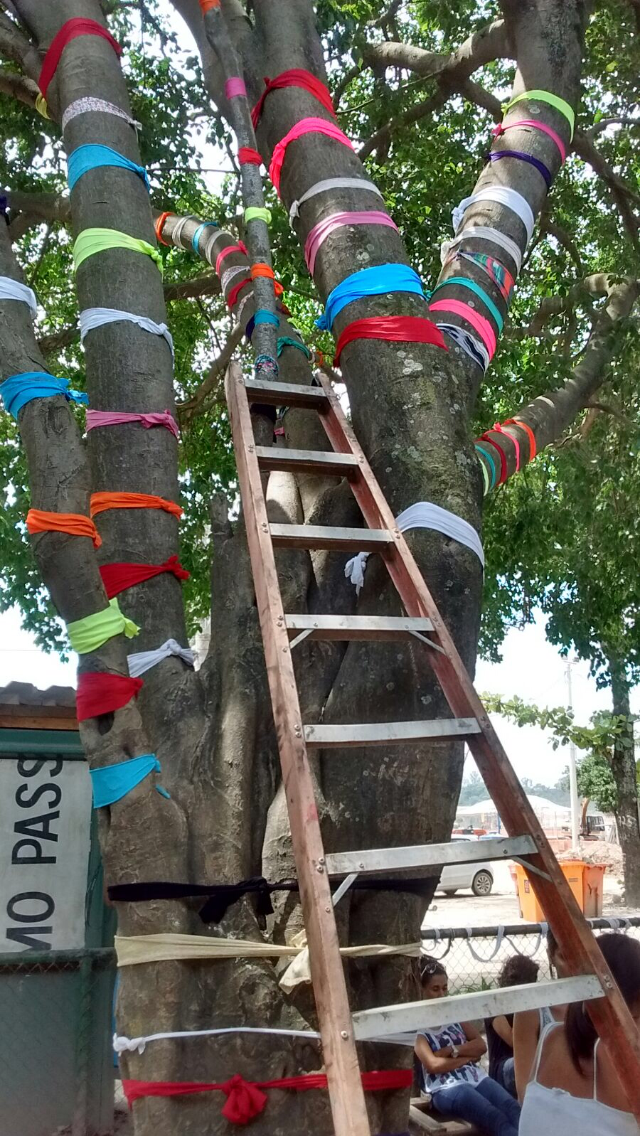 “The Parquinho is the only space for leisure that we can go to on a Saturday or Sunday to get out of the house. We come here to chat with the neighbors and to bring our children to play,” said Conceição Queiroz, 41, one of the Vila Autódromo residents determined to remain in the community.

Located next to the partially constructed Olympic Park in Barra da Tijuca, Vila Autódromo sits on valuable real estate. The city government has been holding private negotiations with individual families, offering monetary compensation or an apartment in the Parque Carioca complex as part of the Minha Casa Minha Vida federal housing program. Under this strategy, the community’s population has shrunk by 83% in the past two years. Yet at least 41 families are steadfast in their determination to stay in Vila Autódromo, and making good on the Mayor’s promise that no resident would be removed against their will.

The idea to revitalize the Parquinho stems from the Community Extension Project at the University of Anhanguera in Niterói with students partnering with Vila Autódromo residents to help redevelop the community.

“[Vila Autódromo] is a very resilient community: they protest, they want to stay, and they know their rights,” said Diana Bogado, a professor at Anhanguera and the director of the Community Extension Project. “Urban policy [in Rio] is an elitist policy, a policy that creates segregation and serves only the interests of real estate development. In reality, this eviction violates human rights.”

When asked on numerous occasions about the future of Vila Autódromo, Paes has been cagey in his responses, leaving residents like Conceição paralyzed with uncertainty. Like the other 40-50 families who refuse to leave, Conceição is waiting for Paes to respond to the proposed People’s Plan, an award winning community development proposal that ensures Vila Autódromo’s future.

“We are in this struggle because the city promised us that they would remove only a part of the community. They weren’t going to remove everyone. They prepared a project, but they never presented it,” said Conceição. “But if the city has developed a plan for the people who don’t want to leave, how come they haven’t presented it?”

In the absence of a definitive plan making good on their right to remain by the city government, residents are continuing to resist removal and invest in their community. As well as revitalizing the playground space, residents have reformed the entrance to the community with a new sign and plants. The community is currently planning its second #OcupaVilaAutódromo cultural festival to be held on Saturday November 28 featuring music, cinema, exhibitions, food and drinks. 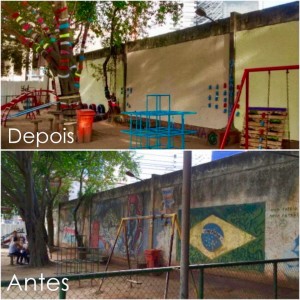