On Wednesday February 10, the last official day of Carnival, a diverse group of around 2,500 people gathered in the Largo do Machado square in South Zone for a different kind of Carnival party. The street parade, or bloco, was Mulheres Rodadas, or ‘women who get around,’ and it is now on its second year. As journalist Renata Rodrigues, co-founder of the bloco tells it, Mulheres Rodadas was inspired in December 2014 by a viral Facebook photo of a young man holding a sign saying, “I don’t want a woman who gets around.” The post elicited outrage among thousands of women, who responded with the hashtag #SomosTodasRodadas (#WeAllGetAround).

Protest by way of party

Rodrigues and her co-organizers were inspired to organize an event to continue conversations about sexism, and to build on creative feminist responses. Rodrigues highlighted that taking on political and cultural issues is part of the very fabric of Carnival, although it might not be clear to visiting tourists.

She explained that adding the feminist discussion to that tradition of addressing society’s most pressing political issues through the imagery and platform of Carnival reaches a new kind of audience: “When you bring art and music you can reach people. You touch people in another way [with] a positive agenda… We speak to other people through this, people that perhaps traditionally aren’t inside [activist circles] and aren’t thinking about these issues.” 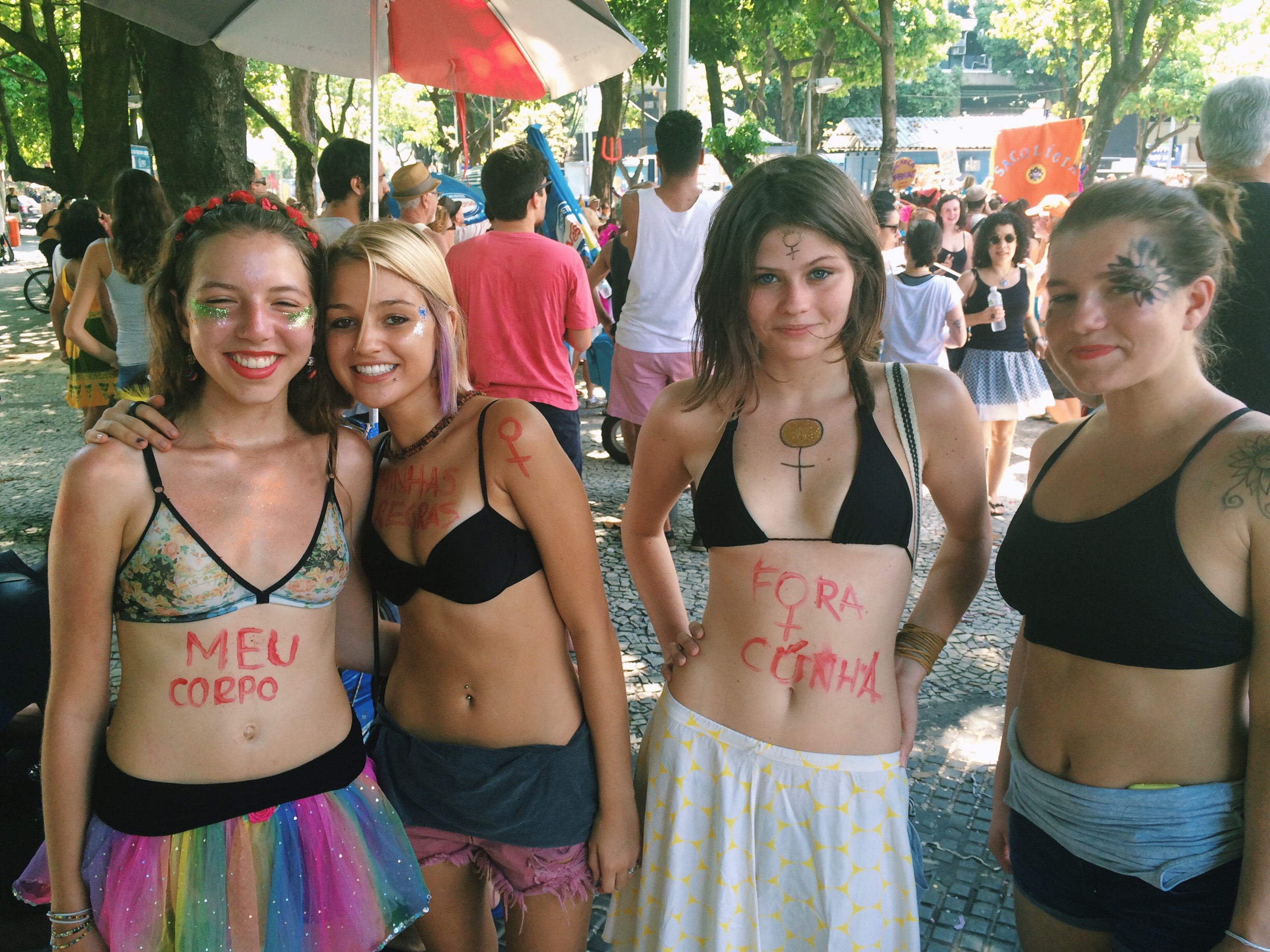 Not only does Carnival allow for a different kind of protest, but it’s an important time to address sexism, as blocos are sites of much sexual harassment. Sexual harassment is a problem in Brazil any time of year–a study by Think Olga showed that of almost 8,000 respondents, 98% of them had suffered harassment. However, the problem is at its worst during the party atmosphere of Carnival, and the campaign #CarnavalSemAssédio (#CarnivalWithoutHarassment), which Mulheres Rodadas partners on, has garnered much public support.

The Mulheres Rodadas bloco brought together teenage girls new to activism and older women long in the fight for women’s rights all in creative costumes. Unfortunately women of all ages had stories to tell of harassment during Carnival.

Arlanza Rebello from the Rio de Janeiro Public Defenders’ Nucleus for the Defense of Women’s Rights explained that her department’s partnership with the bloco began with a call from its organizers. They told her that, at another Carnival event, “a man saw the Mulheres Rodadas shirt, became insulted, and threatened that he would rape her, that he could because she was an easy woman.”

16 year-old Sofia Feitoso echoed this sentiment from her experience at her first Carnival celebrating independently with friends: “For me, this was the biggest demonstration that we really need to fight a lot. Because I have suffered a lot of harassment already during Carnival. It seems it has already become a ‘normal thing.’”

Mulheres Rodadas participants called for political change at both the local and national level, as well as cultural change, creatively blending the two. Many participants sported “Fora Cunha,” or “get out Cunha,” referencing the president of the Chamber of Deputies of Brazil. The women from the public defenders’ office talked about Cunha as “enemy number one” of women’s rights, highlighting his attempts to ban legal abortion in the case of rape, and the possibility that he would challenge the 2006 Maria da Penha Law, which supports domestic violence victims through differentiated reporting systems and penalties. 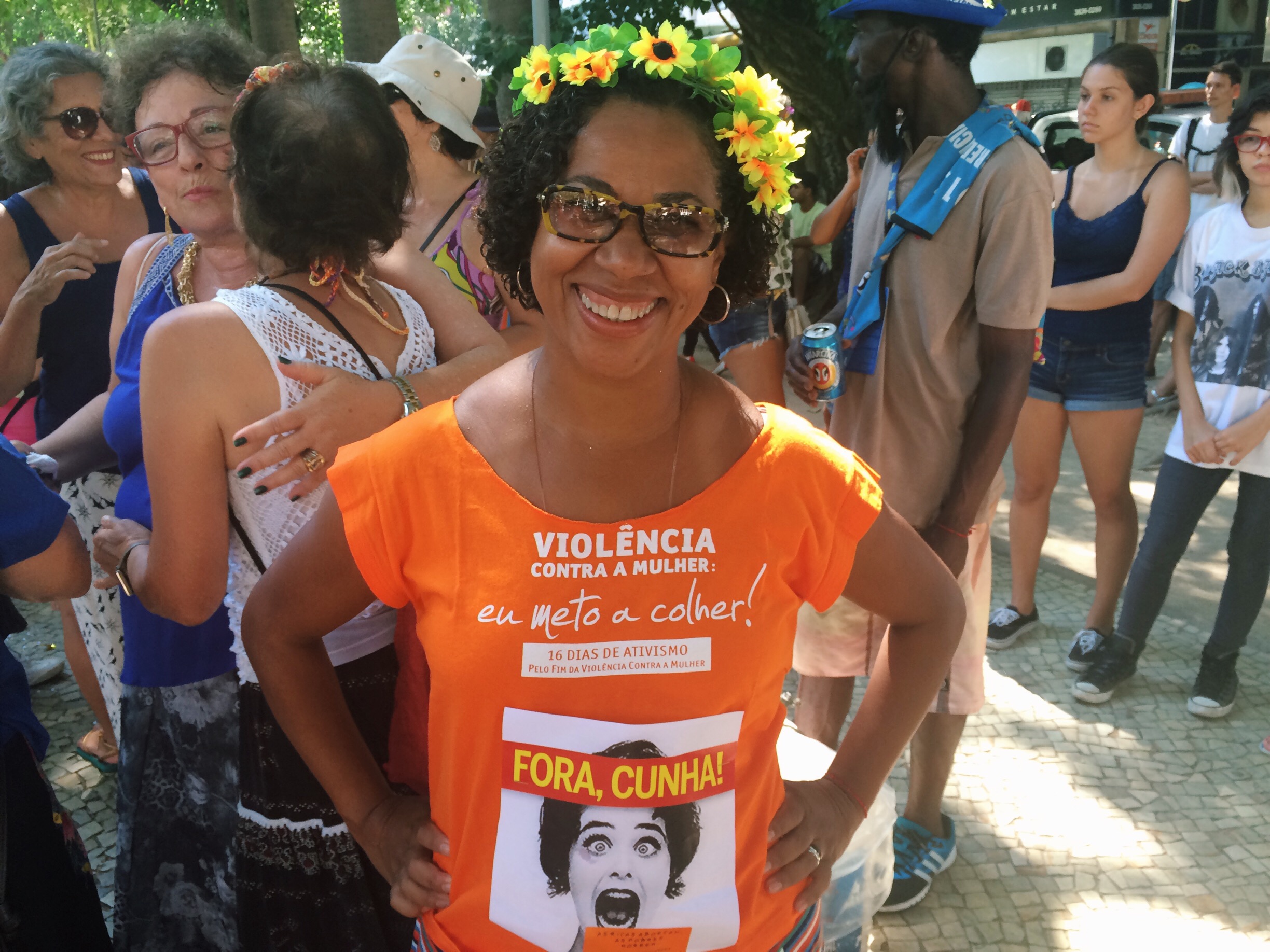 Of this group, lawyer Georgia Bello talked about how she had considered dressing as the wife of Rio de Janeiro mayoral candidate Pedro Paulo because of Paulo’s known history of domestic violence. She explained, such a statement “is not trivializing violence, it’s another form of giving it visibility, of calling the attention of women to not forget that we will soon have an election… and a man could become mayor who beats his wife.”

Mulheres Rodadas’ activities are set to continue beyond the bloco. After the first bloco in 2015, Mulheres Rodadas partnered not only with the #CarnavalSemAssédio campaign, but also with UN Women and the Public Defenders’ Unit of Defense of Women’s Rights, with the intention of continuing actions throughout the year.

As the band began to play for the second annual Bloco das Mulheres Rodadas, Rodrigues talked of actions planned for International Women’s Day on March 8 and beyond: “2016 is a promising year… we have a lot of people engaged with us.”