Every afternoon, around 6pm, I leave my apartment in Vila Isabel, tuck my ipod under my shirt, and head for a run around the closed Maracanã stadium, the great cathedral to Brazilian soccer and home to the 2014 World Cup final. Passing the building’s gates, I catch a few glimpses of the activity inside: construction vehicles digging through mounds of dirt, workers hauling away scrap metal, armed police officers escorting well-dressed officials around the grounds. Clearly, change is afoot. Yet when I turn on Avenida Presidente Castelo Branco, I am treated to the majestic view of the Candelária neighborhood, which is miraculously built right into the side of a mountain. Here, I am reminded that no matter what is happening inside the cathedral, the church still sits in the shadow of a favela.

I have seen this before. In December of 2010, I along with 12 classmates, participated on an alternative break trip to Cape Town, South Africa. The theme of the trip was HIV/AIDS care in townships (South Africa’s own form of a favela), which fit the makeup of the participants, global health majors mostly, save for a lost journalism candidate. We arrived 6 months after the awesome conclusion of the 2010 World Cup, a nail-biter championship which saw Spain defeat the Netherlands and claim its first title. The tournament was watched by over 700 million people and the country swelled with over 300,000 tourists from around the world. To the world’s somewhat racist surprise, the event was carried out without major incident. To the shock of many, South Africa pulled off a fantastic Cup.

Six months later, gone were the cameras, athletes, celebrities, and tourists. Gone were the headlines about a united “rainbow nation,” replaced by inflammatory quotations from the ANC’s Youth Leader Julies Malema, threatening a return to racial violence. The sleek and gleaming Cape Town Stadium remains the highlight of the skyline and appears as an ethereal premonition of a futuristic golden age, yet the only other reminder of the games I encountered was the unsold merchandise that clogged the clearance racks of clothing stores, and the FIFA logo bags now used as trash can liners. According to the New York Times’ piece, Overtime in Soccer City, over $1.6 billion was invested by the South African government in the run-up to the Cup, accounting for over 2% of its annual budget for 2010. Estimates suggest that the country received only a $500 million return on investment. More disheartening were the results of a November 2010 poll which found that only 30% of South Africans believed that the tournament had brought the country economic advantages.

The parallels to Brazil’s World Cup are so apparent that they scarcely merit highlighting. A FIFA poll found that 58.2% of Brazilians stated that the Cup is the event they are most looking forward to (compared to 7.3% for the 2016 Olympic Games to also be held in Rio). According to the same poll, 79% felt that the World Cup will make great contributions to the country and 93% felt that events like the World Cup help bring people together. These numbers are almost identical to those found in South Africa prior to its Cup experience.

Economic predictions are even rosier. Leading global economists predicted a .5% GDP boost for South Africa, whereas Ilan Goldfajn, chief economist at Itaú Unibanco, predicts that Brazil will experience a 1-1.5% boost in GDP for the year. In South Africa’s case, the country’s economic growth actually slowed during the Cup, dropping from 4.6% in the first quarter of 2010 to 3.2% and 2.6% in the second and third quarters respectively. Some of this drop in growth can be attributed to the global recession which cost the Cup an additional 150,000 tourists, yet this great disparity between predicted profits and real ones should at least prompt some discussion about the economic value of the games. However, these critiques are nowhere to be found on FIFA’s website or in the mainstream Brazilian press. No one points out that, in a country where public works projects and social programs stall in Congress for years, suddenly there is the wherewithall to invest over $23 billion in new stadiums, improved roads, and refurbished airports. 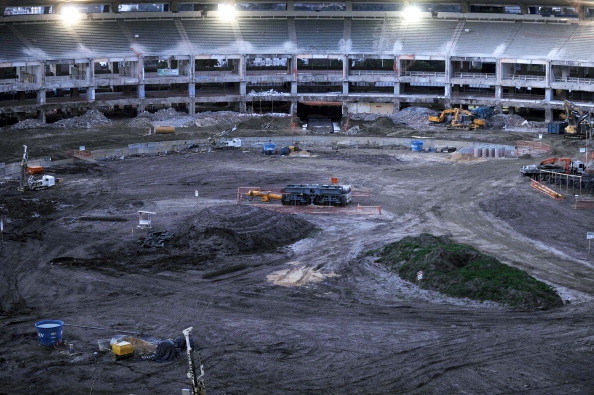 For a few days, a news story of a potential delay in stadium construction is a top headline. FIFA responds by resurrecting none other than World Cup all-time leading scorer Ronaldo who, based upon his own ‘expert’ assessment, assures us that the construction program is on schedule. Yet FIFA is not financially responsible for the stadiums. In fact, FIFA is only responsible for the tournament’s prize money and the teams’ travel arrangements. In Germany, in 2006, this amounted to a mere $279 million against a reported profit by FIFA of $1.8 billion. The additional costs of infrastructure improvements, security, advertisement, and lodging all falls upon the host nation. Still, arguments about the future use of gigantic stadiums, even in a country as soccer-crazy as Brazil, are pushed aside. Mind you that the last major event held in Soccer City, South Africa’s prize jewel, was in March of last year. It was titled, “Night of Bliss with Pastor Chris” and drew roughly 80,000 people. Today, the only consistent visitors to the magnificent stadium are a few random tours, and the exotic birds that now nest in the rooftop.

So what lessons can be derived from South Africa’s experience? Financially, the outcomes were intense but impermanent. Infrastructure was improved, but its continued maintenance remains questionable. On the individual level, has the life of a regular South African changed for the better? Slightly, perhaps. What about those living in the townships and informal slums that surround the cities? For the ones I met, for whom endemic poverty, poor healthcare, and rampant crime are still everyday issues, nothing has changed at all. So what happened then? What was gained? What should be done here in Brazil with the games a mere two years away? 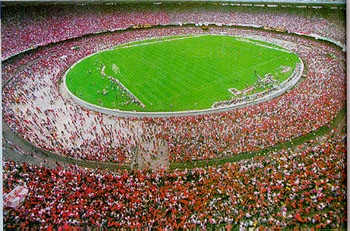 The World Cup is a reality. It is happening, so further discussion about its economic benefits is moot at this point. Perhaps then it is better to see the World Cup through the prism of an opportunity for social change. In the same polls which found the majority of South Africans viewed the economic impact of the games negatively, 78% stated that they felt the World Cup brought the country a sense of “social cohesion.” The global view of South Africa clearly changed, perhaps the internal view; the means of how South Africans view each other changed as well. And maybe that makes it worthwhile.

For Brazil, the World Cup and the Olympics clearly present an opportunity to showcase their country to the world. They have much to show. Here is a modern success story: a country that has emerged from decades of dictatorship, rampant inflation, and violent crime to come out stronger on the other side. It is a moment for pride, but it’s also a chance for reflection. What still needs to be done here? What does it mean to be Brazilian? So perhaps, during a break in the finale of what promises to be an exciting tournament, people in the stands can take a moment, turn away from the “beautiful game” and witness the glory of the mountain that stands above them and the ingenuity it took to build a community along its ridges. The people of Candelária will be watching, they have the best seats in the house.