This is the second article in a three-part series profiling community-based initiatives in three favelas. Led by one or several local residents, these initiatives all share the objective of initiating a virtuous circle of economic, social and/or cultural development within the community.

Mostly known for its famous samba school, the history of the Morro do Salgueiro favela goes back to the beginning of the 20th century when the land of an old coffee plantation was first occupied by freed slaves and migrants. Located in the heights of the Tijuca neighborhood in the North Zone of Rio de Janeiro, it is composed of families who migrated from the northeast of Brazil and the interior of Rio state throughout the 20th century, forming what is now a community of at least 5,000 people.

In the past decade, several remarkable community-based initiatives in the fields of education, culture and environment have been established in Salgueiro. Led by residents of the community, these initiatives all aim to increase awareness and self-esteem within the community, thus contributing to local development.

Amongst those involved in the start of those initiatives are Emerson Pires Menezes, Marcelo da Paz Rocha, Denise Vieira and Denise Francisca de Oliveira Santos. Aged between 37 and 50, they were all either born and raised in the community or are longtime residents.

In 2013, Emerson and Marcelo reopened a bakery formerly owned and managed by Marcelo’s parents with the aim of modernizing it and turning it into a cultural venue for the community. The Padaria Caliel space was extended and adapted to serve lunches and host cultural events, such as poetry evenings or Caxambu performances, a dance and musical genre that originates from the dances performed by slaves in some areas of Minas Gerais and Espírito Santo.

Emerson explains: “We consider the Caxambu of Salgueiro part of the cultural life of the favela because it is a vestige of ancient culture, a form of expression which has persisted over time. Morro do Salgueiro is one of the only representatives of this ancient culture today. For that reason the space we have here is used [by the local Caxambu group] for rehearsals, meetings and any other activity that involves this type of culture.”

With support from the Municipal Culture Secretariat, they installed a book exchange in the bakery to “encourage kids, teenagers and young people to read,” explains Emerson. The restaurant serves traditional Minas Gerais food, the state of origin of Marcelo’s parents, and the space is regularly used by local organizations for meetings. Emerson considers this “a service rendered to the community.”

Denise Vieira and Denise Francisca de Oliveira Santos jointly manage the Jurema Gomes Baptista Community Library in Salgueiro. Launched in 2008 with the help of the city government and several private donors, the library is open to kids every afternoon and has a monthly event called “Come Livros” (Eat Books) in which Denise Francisca walks through the community with a trolley to distribute books to more isolated parts of the favela.

Denise Francisca also runs the community radio station which transmits from its studio in the library via loudspeakers throughout the community. The station has been used to report community news and promote local events since the 1970s, but closed down for a time due to equipment deterioration. The station was reopened by a group of residents with the help of Swiss NGO Pronatura in 2015 under the name “Se Liga Salgueiro!” (Listen up Salgueiro!).

Denise Francisca explains: “It’s a larger project than just communication, with information on health, culture, the memory of Salgueiro… Among the different programs broadcast are: Salgueiro News which features news that may impact the community, such as a public transport strike; Salgueiro Agenda which is about events that are going to happen within the community; Salgueiro Roots, where we do interviews with older residents; Salgueiro Tips with cleaning, cooking and health tips; and Youth Option, a program by young residents which talks about their world.”

Although they lead separate initiatives, Emerson, Marcelo, Denise Francisca and Denise Vieira depend on each other for support and ideas: Emerson takes part in the management of the radio along with Denise Francisca; Denise Francisca helps Denise Vieira in the implementation of socio-environmental activities; Denise Vieira uses the Padaria Caliel for meetings. They thus consider themselves an informal network of residents acting collectively to push the community forward. Their initiatives all share the objective of increasing self-esteem and awareness within the community through the promotion of local culture, reading and education.

“Our common goal is to increase access to culture in the neighborhood… and to defend local popular culture,” affirms Denise Francisca.

According to Emerson, the promotion of local culture contributes to the enhancement of self-esteem amongst the residents. “When we pay tribute to local composers, the community feels represented and gains more self-confidence. Residents are very grateful of this.”

On the role of books in the community, Denise Vieira says: “Reading isn’t a priority, so what we try to do is promote it among young people so they become more critically minded adults, people who won’t accept things so easily.” Denise Francisca adds: “These kids are going to grow up and maybe one day do what we are doing as volunteers, so the aim is to enable them to improve the community by themselves, make the difference within the community, make the community grow.”

According to Emerson and Denise Francisca, the efforts to promote reading mostly benefit young people. “During the past three years, we’ve seen that those who show the greatest interest are the younger ones. They come to search for books on their own initiative, participate in the book exchange, even give some of their own books,” says Emerson.

The poetry evenings organized at the Padaria Caliel, however, attract an older audience: adults of all ages who have some form of interest in music and samba. Emerson is proud to see these events attracting people from outside the community. The bakery has also hosted events as part of the FLUPP literature festival.

The project leaders all speak about the positive impacts their initiatives have had on the community in terms of civic engagement and social interaction. The radio is run by a group of 11 volunteers, and the monthly “Come Livros” book delivery round involves a total of ten to 15 volunteers, all residents of the community. According to Denise Francisca, the community has always been very supportive of the “Come Livros” initiative, with some residents preparing snacks for the storytelling sessions and local salesmen giving free drinks to people involved. 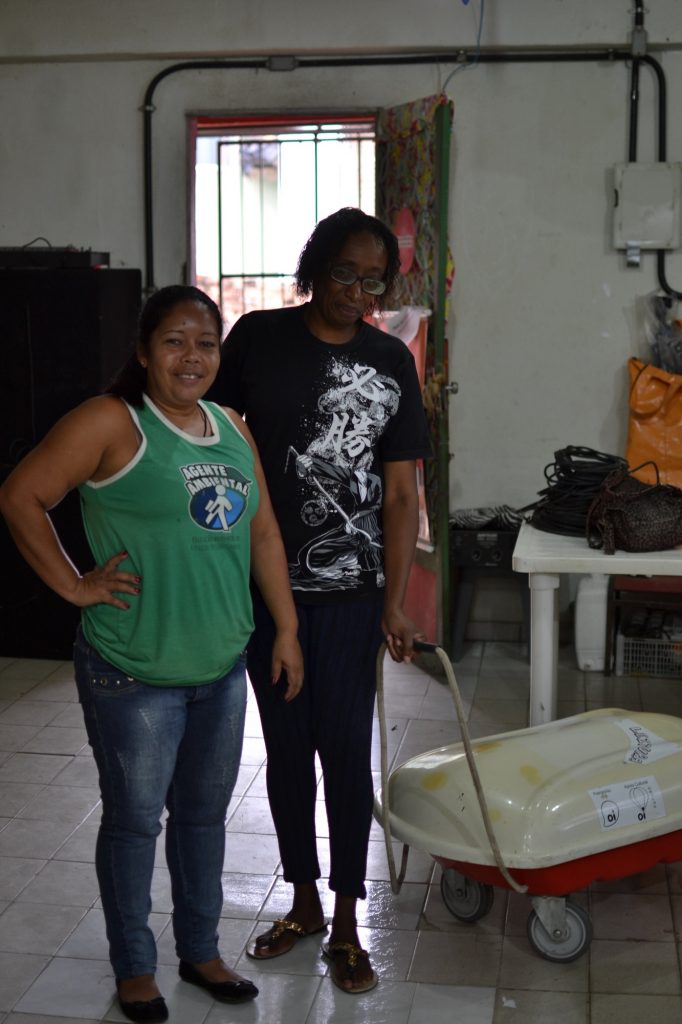 Importance and limits of external support

Denise Vieira and Denise Francisca explain that although part of their initiatives are supported both politically and financially by the city government, they are mostly made possible through support they were able to get from private donors and NGOs. The library is hosted in a municipal building but a large part of the initial book collection was donated by Walmart, which used to have a supermarket in the Tijuca neighborhood. Part of the radio equipment was given by Light, Rio’s electric utility. Denise Vieira undertakes most of her activities as part of her municipal agent position but has also built partnerships with urban stakeholders such as Comlurb, the municipal cleaning and waste collection company, which donates bags and gloves for the clean-up events. Finally, the community garden and radio station both benefited from the support of the Swiss NGO Pronatura.

However they fear losing support due to the current economic crisis. “I am not doing as much as I used to because it requires a lot of money and equipment, and people do not give as much as they used to because of the crisis. Some of the city government’s programs have ceased to exist and I have already lost many partners,” says Denise Vieira. This occurs in a context where public intervention is already judged weak and precarious by both Denise Francisca and Denise Vieira, especially in the field of education and public health, thus leaving the project leaders with low expectations from public authorities for their community’s future.