Apartment blocks that will house journalists during the 2016 Olympic Games were built using “labor in conditions analogous to slavery,” and were erected on a slave burial ground on land claimed by a federally recognized quilombo, a community of descendants of runaway slaves.

The apartment complex, officially called Barra Media Village 3, was built in Quilombo do Camorim, a community near several Olympic venues in the West Zone of Rio de Janeiro. The community was founded in the 19th century, when the area was not within the city of Rio at all, but rather an outlying rural community.

The construction project by real estate developer Cyrela is initially intended to house international journalists during the Games next month and is the source of a series of controversies, including people working in “conditions analogous to slavery,” building on land claimed by the Quilombo do Camorim community, on a mass slave grave and in an environmentally protected area; and the removal of over 1,000 native trees and community facilities, dramatically affecting the area’s water supply.

Residents strongly resisted the construction of the apartment complex and are currently campaigning for a community center to be built on an adjacent, undeveloped parcel of land which was donated by Cyrela to the municipal government.

The community center would not only provide a recreational area, but also help preserve the area’s rich environmental and historical heritage passed on by Afro-Brazilians.

“I can say from my heart that I am proud to be part of a quilombo,” said Adilson Almeida, community leader of the Quilombo do Camorim. “Slavery was a time of great suffering for our ancestors but we remember them not for the suffering, but for the struggle and resistance they went through to build this country.” 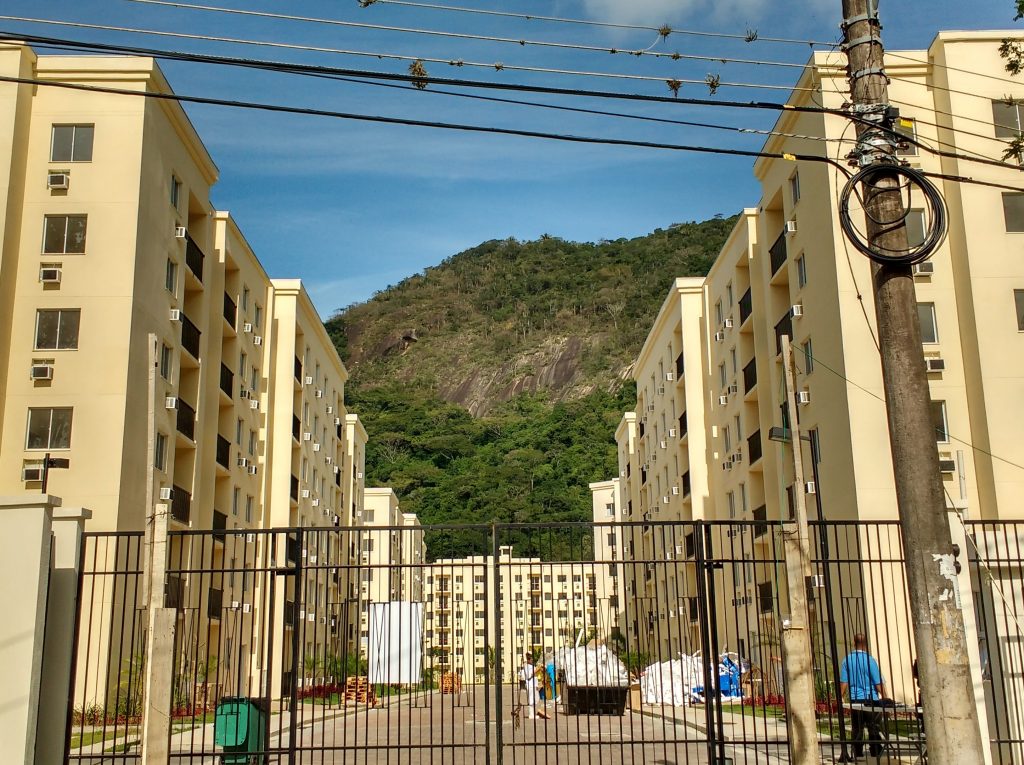 Workers in “conditions analogous to slavery”

In November 2015, the Public Ministry of Labor for Rio rescued 11 laborers working on the construction of the media village, who were working in degrading conditions, which according to the Brazilian penal code are classified as “labor analogous to slavery.”

The accommodation provided to the 11 workers did not have any drinking water, was covered in cockroaches and mold, and the only bathroom had no shower and a toilet that did not flush.

Cyrela “contracted out… the main activities of the company in an illegal way with the objective of circumventing worker’s rights to lower the costs of labor,” according to public prosecutor Guadalupe Couto.

The construction companies working on the media village had to pay R$20,000 in compensation to each of the 11 laborers, in addition to other fines. The Public Ministry also indicated that it would open legal proceedings against the real estate developer to “demand collective moral damages for the harms caused to society by the use of slave labor.”

Camorim, which has been recognized officially by the federal government as a quilombo, applied several years ago for a communal title to the site of the old sugar mill, an important landmark of the region’s slave history. The quilombo wanted to preserve the historical and environmental features of the area, and build a community center for cultural activities.

In 2004, the community began its application to the federal government to acquire title to the land that includes the site of the media village, but due to bureaucratic difficulties, the process is still ongoing.

Beginning in 2013, Cyrela acquired the land claimed by the quilombo, removed the community’s soccer fields, deforested the area and started construction of the apartment complex.

“We suffered a lot with this,” said Hérick Santos, a gardener and resident of Quilombo do Camorim. “We used to play soccer, swim in the river and play [in the forest]. It was our childhood.”

A report by the National Institute of Colonization and Agrarian Reform in 2009 outlined the area’s extensive slave history and indicated that quilombo residents “in principle claim a parcel of land next to the church square for cultural purposes.” This was the land used for the construction of the media village, according to residents.

“For ten years the community has been claiming a space for the cultural development of our traditions exactly where the devastation of trees by the construction companies occurred,” according to a blog post written by Camorim residents in March 2014. “We can see that the deforestation stopped very close to the church.”

Cyrela recently completed construction and handed the building over to the Brazilian Olympic Committee. The media village has been open to journalists since July 5, according to the Rio 2016 Press Accommodation Guide.

The apartment complex was built in an environmentally protected buffer zone which surrounds the Pedra Branca State Park, the largest urban forest in the world, according to a management plan of the state park. In this area, special licenses based on environmental impact studies are required for construction projects to proceed.

Cyrela cut down more than 1,000 native trees on the site to make way for the media village.

“One Sunday morning a chainsaw came and devastated everything including century-old trees,” said Almeida.

The apartment complex was also built in an Area of Special Environmental Interest, which was created by a municipal decree in November 2013 to protect the region’s natural ecosystems and precarious infrastructure. The decree froze concessions for licenses or construction projects in Camorim and other neighborhoods surrounding the Pedra Branca State Park. However, it contained a loophole exempting all construction projects directly or indirectly related to the Olympic Games.

Cyrela has claimed that it had all the necessary licenses for the construction. 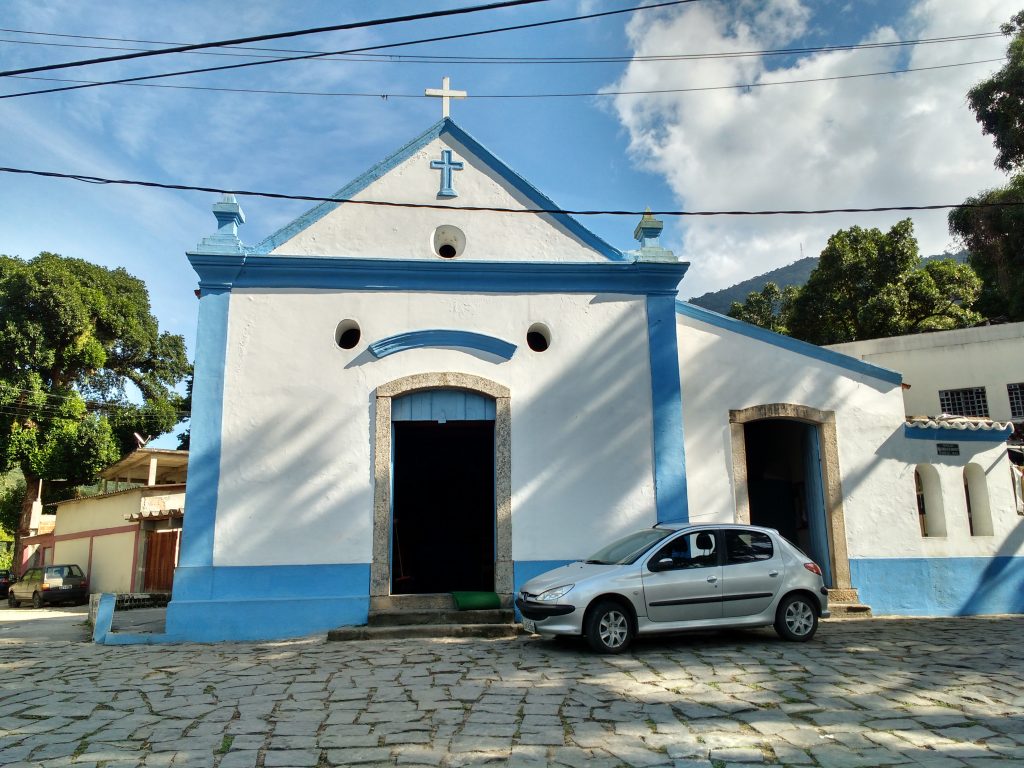 Almeida was particularly upset by the location of the media village because he says it was built on the site of a mass slave grave.

“I regard the ground as sacred because it is where my ancestors were buried,” said Almeida. “Any land where you find artifacts, traces of human bones, or even prehistoric animals comes to be a sacred site and should be protected by law.”

Almeida remembers that around 1990 you could see bones in the ground after spells of heavy rain. “We saw adolescents, children pick up the bones…and bury them again,” he said.

The construction also destroyed remains of the old slave owner’s house and the slavery-era sugar mill, according to Almeida.

During an excavation of the grounds of Camorim’s church in 2000, a large number of human bones were uncovered, which were believed to be of slaves.

Rogério Ribeiro de Oliveira, a geography professor at the Pontifical Catholic University of Rio de Janeiro who has published a book about the history of the area, criticized the construction project for not conducting an archaeological study on the site. He argues it is highly likely slaves were buried there because of its proximity to the church.

“Generally slaves were buried near the church, therefore the chance is high that there was a burial under the new [media village] condominium,” said Oliveira. “It is highly likely that [archaeological] remains were destroyed, not only from the period of the sugar mill but also before, during the pre-colonial period.”

The construction of the apartment complex diverted water away from the Quilombo do Camorim community, leaving residents with extremely restricted access to channeled water.

“Before there were never water shortages here,” said Hérick Santos. “After they started construction, they diverted the water that came here, and redirected it to [the site of the media village]. We have no running water and have to turn on the water pumps in the early hours of the morning because during the day there’s no water.”

Locals say that while they suffer severe shortages of water, the construction has access to water around the clock.

“We find it weird that [those working on the media village] have water 24 hours a day while we only have water after 2am,” added Santos. “It caused an enormous impact.”

Cyrela, the real estate developer responsible for the project, was a major donor to Paes’ re-election campaign. In 2012, the company gave R$500,000 to his political party, of which 75% went to the mayor’s campaign.

This is not the first controversial Olympic construction project involving Cyrela and the municipal government. In December 2012, Paes made a controversial deal with Cyrela to build an Olympic golf course in a protected environmental reserve. The city government gave Cyrela full rights to build 23 new high-rise luxury condominiums onsite in exchange for shouldering the costs of the golf course.

Campaign to build a community center

Residents of Quilombo do Camorim strongly resisted the construction of the apartment complex, which is now complete. However, the quilombo remains determined to see its vision of building a community center through.

Cyrela donated a chunk of undeveloped land adjacent to the media village to the city government, and the quilombo is campaigning hard for a portion of that land to be set aside for a community center.

When Mayor Paes visited the neighborhood in early 2014, he “said that he would be able to intervene with Cyrela for one part [of the land] to be donated to Quilombo do Camorim for social purposes,” according to Almeida. A few days later, Almeida sent an official letter to the mayor requesting that a portion of the land be used for the community center. The quilombo never received a reply.

The damage done by the construction has only strengthened the resolve of the community to conserve the area’s rich historical and environmental heritage. However, it is hindered by not having a dedicated space. The quilombo organizes activities to preserve the surrounding forest and celebrate the tapestry of music, dance, martial arts and religion that have been passed down from their enslaved ancestors.

Quilombos are a living reminder of the long, dark chapter of the nation’s history that many Brazilians would like to forget. However, for members of Quilombo do Camorim, the connection to their ancestors is a source of strength and inspiration.

“We want to keep the memory of our ancestors alive because they still exist in spirit, watching over and guiding us,” said Almeida. “Their blood that was spilt–I don’t want it to be in vain. We want to fight for our space, our rights and our traditions so that our ancestors can look and see that today we are living in a better place.”