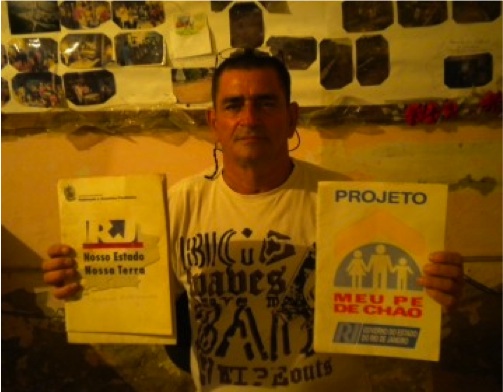 On a hot summer day, just before Carnival, a group of us decided to walk through Vila Autódromo, a community that is targeted by city government for removal. The city’s claim is that Vila Autódromo represents an illegal invasion of public land and must be removed, though in just two years the precise reason for its eviction has changed four times: for construction of the Olympic Media Center; for an Olympic ‘security perimeter’; for environmental reasons; and most recently (last month), because the TransCarioca and TransOlympic roadways will pass through the area.

However, in 1994 the 4,000 or so residents were granted a 99-year lease to the land by the state government. The community was also deemed a Special Zone of Social Interest. The winning Olympic Park construction plan clearly showed Vila Autódromo existing side by side with new construction, but mysteriously in the latest iterations, the community disappears from the maps. The general assumption is that skyrocketing land values have put pressure on city officials to make the space available to developers, the same interests that fund local politicians and newspapers, yet the Brazilian constitution stipulates that those who occupy unused urban land for more than 5 years without contestation by land owners should be granted legal claim. And Vila Autódromo has been there since 1967.

Arriving in Vila Autódromo, one cannot avoid passing a gauntlet of new pastel colored high-rises. The sprouting palm trees and high security fences make the new developments look like Miami in a bottle, and while to some subjectivities aesthetically pleasing, one must wonder at the logic of building major housing units around temporary-use sites such as an Olympic Park. The assumed logic must be that these new high-rises will service the growing elite interested in housing in Barra da Tijuca, as their listing prices are well beyond the incomes of the fisherman and craftsmen that have historically made up the population of Vila Autódromo and nearby Curicica’s multiple favelas.

At the entrance to Vila Autódromo sits a large colorful billboard which presents an aerial photograph of the neighborhood along with the words, “A peaceful and orderly community since 1967” written in three languages. The main road into Vila Autódromo abuts Rio’s racetrack, regularly used for Formula One races, and the hard whirring of engines is constant. Once inside, the group finds President Altair Guimarães sitting in the children’s park, watching over his Neighborhood Association headquarters from the shade of a tall tree. He speaks about the political candidate who built the park in an election year in exchange for votes. Today the park sits unmaintained with no swings hanging from the swing equipment. He points out the rust at the supports of the equipment and explains that it is common in Brazil for politicians to electioneer in this way–creating public works projects before their elections and then disappear, along with the funds, shortly thereafter.

We continue our walk through the neighborhood, which appears deserted as most of the residents here work. The homes are well-kept, several exteriors freshly painted and gardens neatly trimmed. These are signs of permanence. In other nations, where residents’ claim to land is more tenuous, you rarely see this kind of handiwork.

At the far edge of Vila Autódromo the group reaches the shores of Jacarepaguá Lagoon, which separates the community from the Rock in Rio site. The smell is a little off, and the flourishing algae blooms along the banks belies moderate levels of pollution, yet the beauty of the lake, and its necessity in an otherwise arid environment is unmistakable.

Relationships between Vila Autódromo and the outside world are never hostile. During Rock in Rio residents sold refreshments and opened their homes and streets to festival revelers. Vila Autódromo was also treated to free shows by major international acts, taking in the likes of Coldplay and Rihanna from the comfort of their lagoon-edge view.

The sun is getting low and it is nearing time to go. As we head back, we pass a man and his niece relaxing in the shade. Being so near the water, we ask if he is a fisherman. He isn’t, but they sure have a lot to say about the fish. To their recollection, before the racetrack and the concerts, before the Olympics and housing officials, you used to be able to collect your dinner with your bare hands from the sandbars. Now the fish are gone. His niece, a thoughtful recent high school graduate, complains that when the plans were approved for the development of these sites, new jobs in neighboring areas were launched but not for her or her friends. Instead they are being ordered to relocate. Vila Autódromo has no history of crime, no violence or drug trafficking. Before now, this seemed like an asset. Today, it is Rio’s most violent communities that are rewarded with investment while ‘peaceful and orderly’ ones are at risk of eviction.

This article was written by Aron Flasher, and published on February 24, 2012.
in #Rio2016, by International Observers, Favela Culture, Favela Qualities, Solutions, Violations