Ahead of the 2016 Rio Olympics, organizers and city officials touted the Games’ potential positive economic impacts. These Olympics were promised to:

In short, the Rio2016 Committee stated in 2009, studies showed the Games “will bring significant benefits not only for the city’s economy, but also for the state and country.”

In Circus Maximus, economics professor Andrew Zimbalist dissects the assumptions and (mis)calculations that sustain the myth that mega-events guarantee economic benefits for the host city or country. He shows how consulting firms employed by host cities and countries often arrive at “vastly inflated and unrealistic estimate(s)” that make for excellent World Cup and Olympics marketing, while independent academic studies find an absence of conclusive evidence that mega-events bring positive economic impacts. 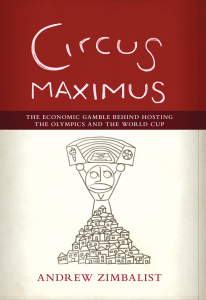 Zimbalist examined 19 independent academic studies that looked at 26 mega-events. He found that “in sixteen cases, the Games were found to have no statistically significant effect on employment or income, in seven cases a modest positive effect on income or short-run employment was found, and in three cases a negative effect on income was found. Where there was a modest short-term positive employment effect, it was in each case a fraction of the officially projected effect.”

So how do city officials and Games organizers arrive at such optimistic projections? Zimbalist explains that they usually use predictive models that rely on assumptions about how one component of the economy will respond to changes in another. Often these assumptions are very generous. For example, the people crunching the data might assume that tourists’ spending stays in the local economy, but this is increasingly unlikely with the prevalence of international chains in the hospitality industry. The data crunchers may also conveniently forget that for all the incoming mega-event tourists, other tourists who would normally visit the host city or country choose to go elsewhere. Even some local residents opt to leave to avoid the hectic Games crowds and prices, so their money leaves the local economy too.

At the same time as they use exaggerated multipliers, reports that aim to promote mega-events drastically underestimate the costs of hosting. This one-two-punch sets up a rosy vision of positive transformations that is destined to be ruptured by reality.

Rather than relying on predictive models, Zimbalist and the academics he cites have examined the actual data from mega-event host cities—before, during, and after the Games. This approach allows academics to observe, for example, that the “modest increase” in tourist revenue around Atlanta’s 1996 Olympics stemmed from increased hotel rates, rather than an increase in tourist numbers.

Hosting the Olympics has become so expensive that Zimbalist argues any short-term economic benefits cannot possibly compensate for expenditures. He writes that “any economic justification for hosting the competition must be found in the long-run or legacy benefits,” but his research shows the commonly claimed long-term benefits must be approached critically too.

Zimbalist debunks the notion mega-events always increase tourism. Mega-events displace tourists who would come normally, but who are deterred by crowds, construction, and high prices. Tourism for the year of the Olympics actually fell compared to the previous year in Beijing in 2008 and London in 2012. Unlike regular tourists, Olympic tourists are less likely to visit the city’s permanent tourist sites, but projections pre-event fail to take into account the difference.

Increased attention on the host during the Games does not necessarily result in higher tourism in the years after the event either; after the Sydney Olympics, for example, tourism to Australia fell over the next three years. Analyzing studies of other cities, Zimbalist finds that, with the exception of Barcelona, there was little to no long term impact on tourism. Furthermore, foreigners watching the Olympics at home on TV see a certain side of a country. If an event encounters trouble, such as social unrest and student protests at the 1968 Mexico City Games, terrorism at the 1972 Munich Games, or more recently, mismanagement and reporting on sub-par conditions in the Olympic Village at the 2014 Sochi Games, the spotlight could affect how people perceive the host for the worse.

The trade and investment myth

The IOC has asserted that increased trade and investment are among the many legacy benefits of hosting the Olympics. Zimbalist draws out why the assertion is not so simple. As with other claimed results of hosting a mega-event, it is hard to show that hosting itself causes increased investment. It may simply be that a city or country signals to the world that it is open to foreign investment by bidding to host, not by actually hosting the Olympics itself. Foreign investment does not always increase during and after the Olympics either: in London, foreign investment for 2012-13 was almost half of what it was for 2005-07. Other factors, like global recessions and financial crises, have more impact than mega-events.

The most commonly cited example of a city successfully hosting the Olympics and seeing long-term benefit, including tourism growth, is Barcelona in 1992 (and even these Olympics’ legacy can be debated). Zimbalist takes pains to explain the unique circumstances that made Barcelona’s successes possible and why those circumstances are so difficult to replicate. Neglected while Franco was in power in Spain, Barcelona was a “hidden jewel” that had huge potential tourism growth. The local government began comprehensive urban planning that considered an Olympic bid in the late 1970s, but did not host until 1992. While the Olympics did help catalyze changes, many of the developments in Barcelona—including even refurbished stadiums—would have gone on without the Games.

Affirming a now-famous quote from Barcelona’s Olympics mayor Pasqual Maragall, Zimbalist writes: “Barcelona used the Olympics; the Olympics didn’t use Barcelona.” Rio’s Mayor Eduardo Paes has also echoed this mantra, asserting repeatedly that Rio is “using the Olympics.” While many cities have tried to emulate Barcelona’s formula, many factors are almost impossible for cities to intentionally duplicate. Coming out of a period of slow economic growth, Olympic spending was needed stimulus in Barcelona. Most cities, including Rio, bid to host when they are in a period of economic growth, in which case Olympic spending can stoke inflation. Potential hosts can learn from Barcelona’s example, but copying it proves extremely difficult.

Zimbalist suggests there will always be some infrastructure developments that the host city and its supporters can point to as examples of long-term legacies. But the economist has a couple of simple questions in response:

“Why couldn’t these positive investments have been made without hosting the games, and why was it necessary to spend tens of billions of dollars to host the event in order to get several hundred million dollars, or even a billion or more dollars, of worthwhile infrastructural investments?”

Across a series of determined opinion pieces in English-language media, Mayor Paes continues to argue “the Olympics have been an opportunity to attract investments,” “add value to the city’s brand, improving services and attracting global attention and visitors,” and “build a lasting and better place once the athletes go home.” He highlights transportation infrastructure and revitalization projects, claiming that Rio is successfully following the Barcelona model. Zimbalist’s book raises red flags around all these claims, and provides a convincing set of evidence that, with mega-events, we must approach legacy predictions disguised as facts with caution.