On November 19, the 5th Hanging Garden Festival took place in Morro da Babilônia. The event, which has taken place over three editions in an area of the hill where the favela meets the forest, included works of art by young emerging artists and various musical attractions, coming from within the community itself and from outside.

Along the dirt road between the festival’s three stages, the audience discovered the nearly 30 works of art installed in the locale. In between houses and trees, in a relaxed environment, the audience encountered photographs hanging on branches, sound installations with cricket noises, and poems on steps.

Alongside the works of the young artists were works by invited artists, such as Ernesto Neto, Marcos Chaves, Franz Manata and Saulo Laudares.

The night–which included musical presentations from Silvia Duffrayer, Tyaro Maia, Amalá, Maurício Monteiro and his samba group and sets by the Babilônia DJs responsible for the Mirante in Concert festival–came to an end with a body-shaking samba by the group Samba de Roda Filhas de Anastácio.

For the first time, the festival had support from the Favela Criativa program which allowed for the undertaking of a month-long artistic residency. The nine selected artists proposed works that addressed the area’s sociopolitical issues, interacting with the geographic space and the favela’s residents.

The residency allowed residents to get to know the artists and their work up close. One of the highlights of the interaction was the art of Thiago Antonio, which involved the planting of sunflowers through the exhibition space, generating great interest from residents and many requests for the artist’s sunflowers. Another work that highlighted the relationship with the location was the performance of Mônica Ventura, who gathered a group of black women in a show inspired by the Sisterhood of the Good Death. The performance involved using one of the last remaining natural pools on Morro da Babilônia, a place of historical and symbolic value to the community.

“Since the residency started, the residents were aware it would happen and the integration was more natural. The festival was done as a consequence, it wasn’t a custodian event that colonizes and gentrifies,” declared Dandara Catete, the creator of the festival and creative director.

The organizers sought diversity among the group of resident artists, bringing artists from other favelas and peripherial areas such as Morro do Dendê and Mesquita, as well as artists from other countries like Argentina and Germany. Beyond contributing to the set-up and creation of the exhibition catalog, community members participated in a three-day collective process to choose the non-resident artists. Other highlights of the residency were the visit to the studio of artist Cildo Meirelles, a visit to the African Heritage Circuit in the Port Region guided by the New Blacks Institute, and visits by curator Fernando Cocchiarale, theorist Jorge Vasconcellos, and artist Ricardo Basbaum.

The central theme of the festival was the concept of decolonization. This theme was debated at the start of the event in a panel composed of Andiara Dee Dee, an artist and activist of the black feminist movement, Rodrigo Mondego, a human rights lawyer and Álvaro Maciel, a member of one of the founding families of Morro da Babilônia and father of Álvaro Júnior, the Hanging Garden’s cultural producer since the event began in 2011. 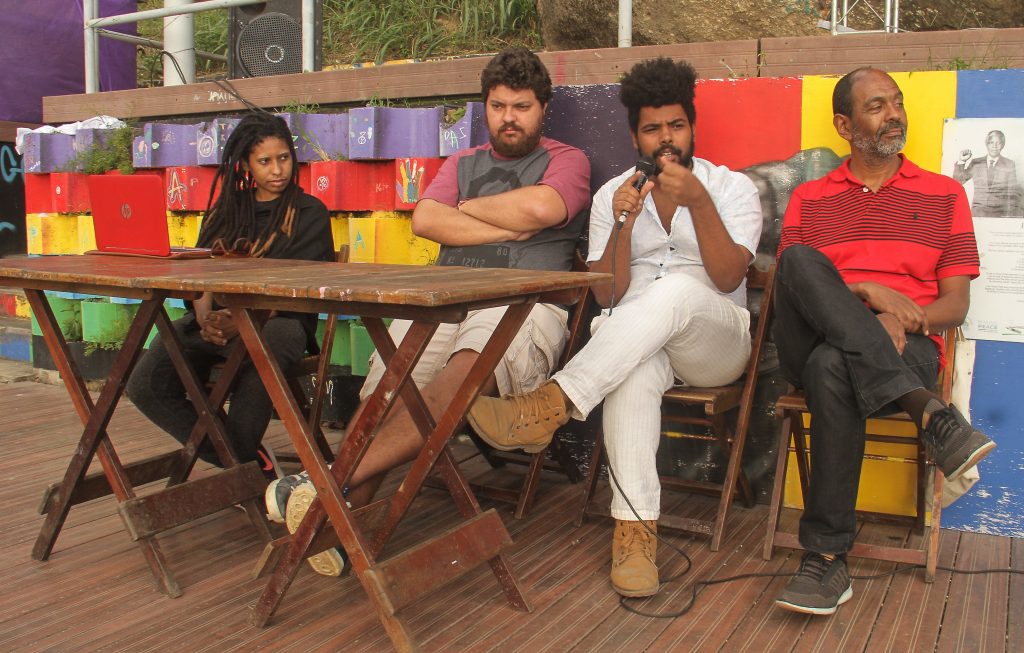 Along its five-year trajectory, the festival–that arose as a proposal to occupy gardens with contemporary art–has become more public and political, focusing on the contemporary art space within favelas. In this current context of political and financial crisis, the festival’s organizers wanted to focus on alternatives like co-dependence and self-legitimization that have been emerging as a counterpoint to a pattern of colonization and domination.

On November 27, the closing event of the artistic residency and the festival’s activities took place at the Casa França-Brasil from 5pm to 10pm. The event was open to the public.