On Thursday, December 15, Catalytic Communities (CatComm), the NGO that publishes RioOnWatch, released its report Favelas in the Media: How the Global Narrative on Favelas Changed in Rio’s Mega-Event Years, a study of the international media’s portrayal of favelas from 2008-2016.

RioOnWatch and Other Tools to Change the Narrative

Williamson began by presenting on how RioOnWatch began. Short for Rio Olympics Neighborhood Watch, RioOnWatch borrowed from the English concept of a neighborhood watch. The site began as a collaborative blog during CatComm’s 2010 Strategic Use of Social Media training for favela organizers, as a collective blog for them to report on the changes they saw taking place in pre-Olympic Rio, from the vantage point of their communities.

By late 2010 the site was also publishing accounts by volunteer ‘international observers’ (building on similar networks established in Vancouver prior to their Winter Games), including documenting the first mega-event-induced forced evictions of favelas in Rio.

These reports caught the attention of international freelancers and global correspondents for major outlets, who were arriving in Rio at the time to cover the mega-event build-up years. By early 2011 major outlets began seeking out CatComm staff for context, story ideas, and contacts in favelas, and following RioOnWatch for context, updates and leads.

However, CatComm team members detected a significant lapse between the reality of Rio’s favelas and the coverage that ensued, particularly from “parachute journalists” who would arrive for short periods, but even among major contributors to international publications. Inaccurate, unbalanced, stigmatizing portrayals of favelas were common, and journalists, focused on specific stories and fast deadlines, were unaware of how their reporting contributed to a global stigma that legitimized counter-productive policies towards favela communities on-the-ground. Ultimately, this meant that stigmatizing coverage further exacerbated problems which led to more stigmatizing coverage, in a sort of relentless wheel that kept communities marginalized.

CatComm thus noted the opportunity presented by Rio’s mega-event years to improve the narrative surrounding favelas, given the greater quality and quantity of coverage Rio would experience during these years. The organization then set out to provide a number of tools to hasten improvements in coverage, beyond RioOnWatch, including its RioONWire favela news wire, World Cup press resources, press materials and Olympics Resources for Journalists, analyzing the Best and Worst reporting on favelas regularly, alternative press conferences, community contact lists and maps, reality tours, and one-on-one support for journalists covering Rio, which over time resulted in hundreds of reports supported or facilitated by the CatComm team. CatComm also kept track of all international coverage through monthly digests sent to researchers’ and journalists’ inboxes.

Favelas in the Media Report Launch

Catalytic Communities’ research coordinator Cerianne Robertson led a team of approximately 30 volunteers over three years in researching and compiling the report, Favelas in the Media: How the Global Narrative on Favelas Changed in Rio’s Mega-Event Years, launched and summarized by Williamson at the event. All 1094 articles mentioning ‘favela’ and published in eight diverse major English-speaking publications from 2008-2016 were coded. Publications covered included The New York Times, The Wall Street Journal, USA Today, The Guardian, The Daily Mail, The Telegraph, Associated Press, and Al Jazeera.

Broadly speaking, the study found that coverage of favelas increased significantly, with the most taking place in 2013-14 and 2015-16, the years leading up to the 2014 World Cup and 2016 Olympic Games. Over the eight-year period, the media continued to portray favelas negatively most of the time. “Slum” remained the most-used English translation for favela, and “violence and drugs” was the most common topic.

The full report is available in English and Portuguese. The full presentation from the December 15 launch is available here:

Although significant negative coverage of favelas persisted over the time period, positive coverage increased, and journalists became better informed. The international media began to quote favela residents, the visibility of favela voices increasing 16-fold over the eight years. Neutral translations of favela, like “community,” increased. The number of articles portraying favelas as sources of culture and places with a strong “sense of community” also increased. The lingering question as 2016 comes to a close is whether these positive changes in favela reporting will continue.

Among the 1094 articles studied, 17 were written or co-written by favela authors, most from The Guardian‘s View from the Favelas series. Though mostly discussing violence as part of their narrative, these articles called favelas by their names and were significantly more likely to refer to favelas as places with a strong sense of community. The conclusion from this section of the report* is that favela authors produced more nuanced, balanced and productive reporting than the average of the overall sample and that employing favela-based writers should be a priority for publications looking to improve the quality of their favela reporting. One of these favela journalists was Michel Silva, the first speaker on the panel.

Panel Unites Around Progress Made in International Coverage, Need for Community Journalists to Go Mainstream

Silva began the panel discussion by describing the experience of establishing Jornal Fala Roça as a venue to highlight the northeastern Brazilian culture prominent in Rocinha, in a print format that residents without access to technology could still access. He and his sister Michele started the paper after Silva was selected by the Networks for Youth Agency‘s entrepreneurial incubation program. Silva then spoke about the selection process for The Guardian‘s View from the Favelas series and how Brazilian news outlets should consider following The Guardian‘s lead.

For Raull Santiago, of Alemão media collective Coletivo Papo Reto, which was covered in The New York Times Magazine in 2015, community media has a specific role. “Basically we use independent communication as a tool to find and affirm rights within the favela. This struggle, which Michel also brought out, we call Us for Us. We try to generate communication that strengthens dialog and discussion, and encourages people within the community to build things that feed this process, to use tools to get out what is happening, to communicate what is happening, to help create future change.”

Brazilian mainstream media, said Santiago, “doesn’t enter the favela. They stop at the entrance, and cover from there, while in the favela 45 different things are happening.” This approach fails to cover stories accurately because, “in the end, the official narrative is the testimony of one police officer, and the only truth that is seen is that one.” Santiago’s request to future journalists covering favelas? “Please don’t talk only about violence.”

Researcher Leonardo Custódio, from Magé in Greater Rio’s Baixada Fluminense, conducted his doctoral research on favela media activism at the University of Tampere, Finland. He spoke next about his experience growing up in the Baixada, and similarities between his suburban home and Rio favelas–the Baixada is increasingly neglected by the government and victim of the consequences of Rio’s Pacifying Police Units that have pushed criminal activity there. For Custódio, favela leaders’ efforts to organize their communities offer helpful models for the Baixada. He also provided a more global view on favela media, speaking to the importance of sharing experience and knowledge between different favelas.

Dom Phillips, Washington Post correspondent based in Rio through the Olympic Games and frequent contributor to The Guardian, provided his perspective as an international reporter. “There’s a tendency here in Brazil to talk about the international media as if it were one thing, but it’s not. We’re talking about many different countries, languages, and profiles.” Philips has spent nine years reporting from Rio, and spoke about his own experience learning how to cover favelas appropriately. “I remember the meeting about the issue of this word ‘slum,’” he relayed, referring to a CatComm alternative press conference in 2015. “I was there as well, and I confess that before that I used that word without thinking, but after that meeting I changed.”

Sandra Maria from Vila Autódromo was the final speaker on the panel. Sandra was among the 20 families that successfully resisted eviction in Vila Autódromo, and eventually received one of the homes built for those remaining families. She spoke about the intense pressure that ultimately removed almost the entire community and about how important the support they received from the international media had been. “When the mega events came to Rio de Janeiro, the threat and pressure to remove Vila Autódromo grew, it intensified… Our fight was very cruel, unjust, and unequal, because we were a small community fighting against the economic monster that is the Olympics.” 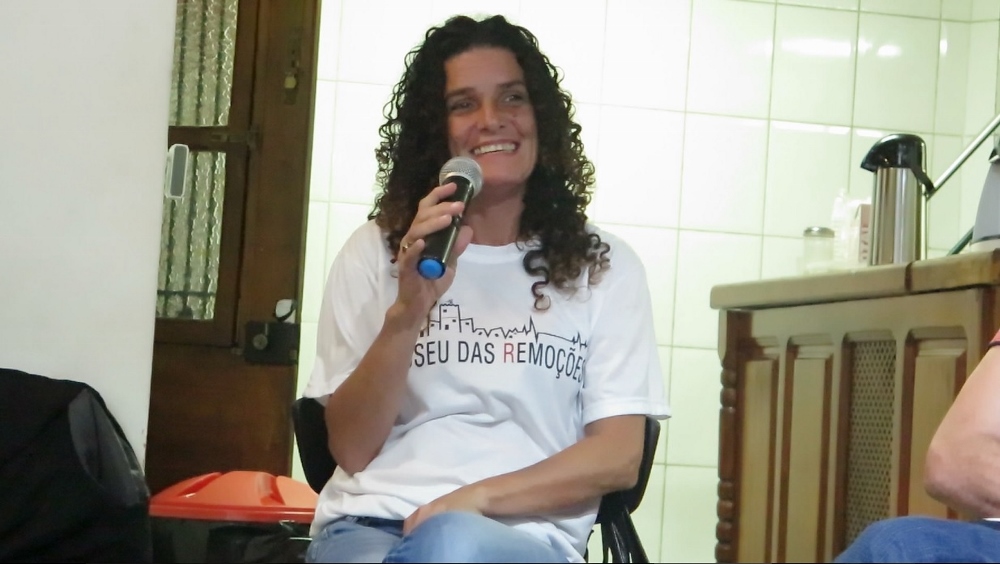 And why did residents of Vila Autódromo fight so hard to overcome obstacles and remain in their community? Sandra turned to the theme of “us for us” to close, answering this question. “Inside the favela, things are resolved by a social pact in relation to the community’s own collectiveness, because people support each other. So, one neighbor watches another’s son so that resident can go to work, and later that resident watches the other’s daughter, so they can go to night school. And in this way the favela survives, each helping the other, us for us.”

Check out cable news TVT’s coverage of the event in Portuguese:

*Full List of Conclusions for Media Outlets Covering Rio, from the Favelas in the Media Report: