As Rio de Janeiro becomes further engulfed in its financial crisis, the state’s education sector has been suffering major setbacks. To combat the possibility of bankruptcy, the state announced that as many as 1,000 public schools would be closed over the upcoming year. While teachers, students, and advocacy groups have fought hard against mass school closings, Rio’s public education system seems to be spiraling out of control.

The state of Rio is never random in choosing which schools to close. According to Luiza,* a schoolteacher from a state school in the South Zone, the government thinks twice before closing a school in a wealthy area, whereas closing a school in a favela or low-income neighborhood has become a no-brainer. “You close a school much more calmly where rich people won’t see it. Politics is about criminalizing poverty.” When a school closes, students are then mandated to another public school that has room, but not necessarily in the same region. Often, these students have to travel more than an hour to get to school. “We have students coming from many different places. When they close schools in peripheral neighborhoods, students come to the South Zone.” The shuffling of students then creates an issue of overcrowding. “Many places operate as two schools in one,” said Luiza.

Back in November 2016, students and teachers held a hearing with the Secretary of Education at the Education Commission of Rio de Janeiro’s State Legislative Assembly (Alerj) to discuss the state of public schools, especially closings. Elaine Melchiades, a 16-year old student from a recently closed high school in Novo Friburgo, expressed concern for the rights of her fellow classmates and teachers. “We are people, we are ideas! If democracy has to be created, let it be created correctly. Especially with people who are not going to make use of that which they are offering us,” said Melchiades.

History teacher Simone Duarte, who was also at the meeting, described some of the realities that community members face when a neighborhood school is closed. Last year, the school that Duarte taught at in Niteroi was closed indeterminately, and he saw the effects firsthand. The repercussions from this decision, she explained, were enormous. “The problem is the idea of belonging. The school has been serving the community for 102 years. We have been in this building alone for 48. The community has the school as a reference. The students are left out. The parents, who were also students, are left out. There was no communication, nor was there discussion with the community. The government also wants to ignore the idea of differences between communities. What is offered to the students is a school in another community. This brings up feelings of insecurity and fear for students and families,” Duarte said. 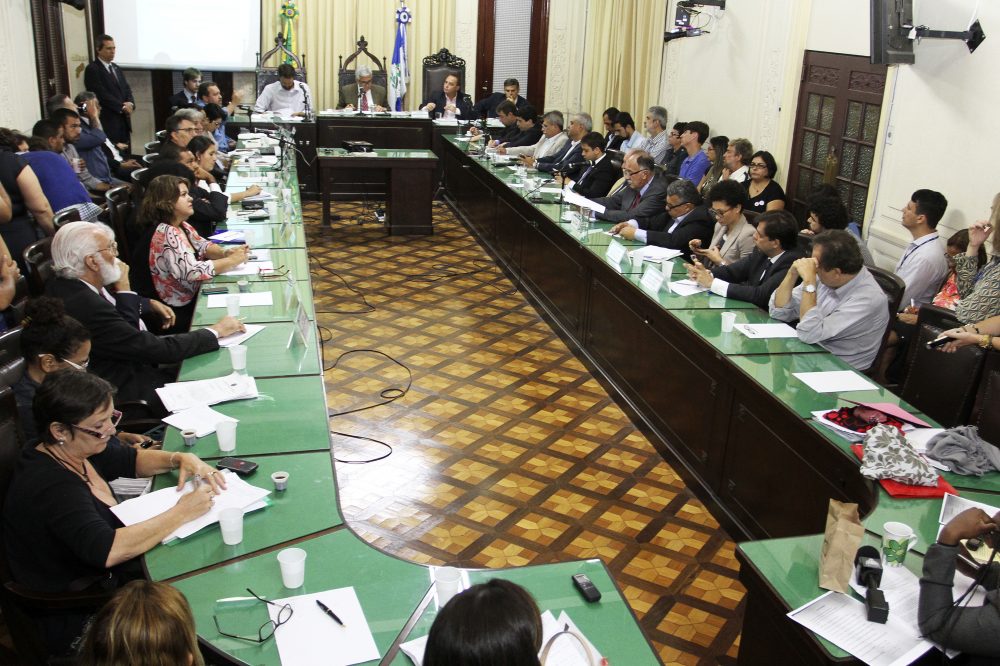 School closings are only one aspect of the many problems facing the public school system in Rio today. While it is very unlikely that the government will close Luiza’s school in the South Zone, working conditions there have become practically unbearable. She mentioned that her salary at one school is not enough to pay rent, so she works at more than one. One of the schools she is working at now does not have enough money to hire basic administrative staff–not even a doorman or cleaning staff. The quality of teaching is also extremely worrisome. “There are practically no Physics or Chemistry teachers left in the public school system, everyone who is qualified has found other better paying jobs”.

While the current financial crisis has affected the vast majority of people across the state of Rio de Janeiro, those in low-income communities have been hit hardest. Luiza expressed her frustration with the city’s decision to hold recent mega-events yet its inability to provide basic services for citizens. “From my understanding, we had the World Cup that showed that we were not broke. Now it is time for the government to pay for it. But they are taking money from those who need it. It is a moral crisis, more moral than economic. They are taking money away from education. We are dealing with some very serious problems.”

*Some names in this article have been changed to protect interviewees.