The scene was Rio de Janeiro, the month was July and Black July was underway—an event that held meetings across the city to discuss racism in its different forms. Meanwhile, in the space of less than thirty minutes I experienced two scenes in downtown Rio that left me perplexed. Both scenes boiled down to a common goal: protecting capital.

The first scene was in front of the Cinelândia Starbucks, near the metro exit. I was standing there, looking at my phone, and getting organized for a meeting I had later on Rua México, when an elderly black man, homeless and with a visible problem with his leg came up and asked me for some money to buy lunch. He was having trouble speaking and was almost falling on top of me, though that didn’t bother me at all. For ideological reasons I always give to homeless people when they ask me for money—more on this later. I had hardly got my hands on my wallet when the Starbucks security guard approached me to say that the old man couldn’t come into the store. I was doubly surprised by this episode because, as well as having no intention of taking the old man for one of their expensive coffees, no one had actually said anything to this security guard about us. And, of course, if we had wanted to go into the store, we would have done so! There’s no law that could have stopped us.

I still had a bit of time to kill so I decided to wait at Nisa Café, which is on Rua México in front of the US Consulate. While I was waiting, two young black boys came up to me and asked me to buy them a snack. But the security in these places is intense, especially if you’re black. They need to protect at any cost the image of their establishments from the presence of black people. The boys hadn’t even finished their sentence before two security guards came to kick them out. At this point I was still angry about the scene with the elderly man so I got even more annoyed with this same old situation. When I said loudly that I was going to pay for some food for the boys, the security guards backed off.

I talked to the boys while they waited for their food. I spoke loudly. I wanted the security guards to hear what I was saying. I wanted the guards to know that the boys had the right to be there! Even so, the boys weren’t feeling comfortable in the café, thinking it quite elegant when really it was nothing special. When you have modest references regarding the places that you’re allowed to go to, any appearance of elegance hits you hard. And the security guards needed to maintain this appearance, exactly by not giving them the right to be there.

While talking to the boys I discovered that they were friends and that they were going to go back to Caxias (in Rio’s metropolitan area) at the end of the day. Downtown Rio was a big world for them; it was where they would have better chances of making a bit of money. They both kept their eyes low and when they glanced at the security guards they looked scared. They whispered to each other about the guards and the possible aggression they could face from them. Possibilities that were based on their personal experiences of the city’s streets. 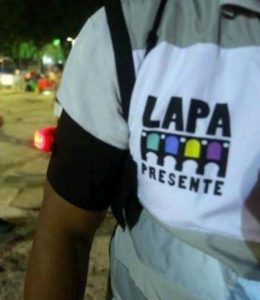 It was hard not to think that this same logic resulted in the Candelária massacre. It was fear of young street kids that motivated the massacre that took place while they were sleeping. At the time, some people celebrated the massacre. They said that the kids had committed petty crimes and that they were dirtying the image of the area and disrupting business. We justify a lot in the name of business. We shouldn’t be surprised that the “Lapa, Centro and Méier Presente” programs (regular police patrols aimed to increase security in those neighborhoods) are sponsored by Fecomércio, a business federation with a big interest in keeping profits high and black people far away. No surprise that the same federation is also behind the Disque Denúncia, a crime reporting program.

These two episodes are nothing new. They are the fruits of an old project called “the Marvelous City,” a project that involves forced removals from favelas and the extermination of the black population. In recent years another name emerged—“the Olympic City”—but the policies are the same. This process started during the Pan-American Games, with massacres, evictions and clean-ups. The difference is that now businesses are with the government and participating actively in the city creation project.

We are entering into a new phase in Rio with the army on the streets and local newspapers choosing to cover crime in a new section called “War in Rio.” This is a war to protect those who already have protection and those who don’t suffer threats. It’s not the Rio citizens who are being protected. It’s the Olympics investments that are being protected. The war in Rio isn’t against drugs, it’s against poor people.

According to my friends who organized Black July, any society in which street kids are seen to be “disrupting business” is a failed society. And I agree.

Do you remember how I said earlier that for ideological reasons I always give money to homeless people when they ask? I don’t do this just because I believe what they tell me. I do it because I want to show them that a beggar is not merely an obstruction that deserves to be dealt with by security guards or waiters. We help to justify the actions of those security guards and waiters because we treat beggars as obstructions that get in the way of our vibe. We’re reinforcing in another sense what’s already going on in public policy in Rio: security projects don’t protect people—they protect the circulation, albeit restricted, of capital. The “Lapa Presente” program had sponsorship from Fecomércio. The UPP program received a large investment from the EBX Group, chaired by tycoon Eike Batista.

Let’s not fool ourselves. The attitudes that exclude black people from circulating freely and obstruct their empowerment by blocking their access to the city, reflect and justify private investments in massacres and security projects that hurt people and protect capital.

Thainã de Medeiros is a museologist and journalist, born in Complexo da Penha. He has lived in Complexo do Alemão for four years. He’s part of Coletivo Papo Reto, a media collective that uses audiovisual material as a way of disputing narratives about favelas.