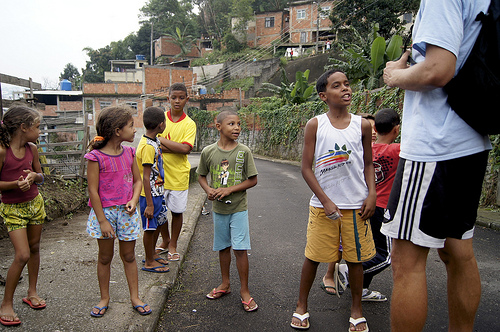 While a group of curious outsiders, including me, visited the favela Complexo da Penha, a few locals and a tame toy poodle named Borris tagged along. Since many Americans don’t visit this part of Rio very often, the locals took this chance as an opportunity to learn more about the United States. One of them tried to corroborate what she heard on television, so she asked me if I had ever experienced earthquakes and hurricanes and I said yes to both. Her eyes grew wide with horror. “We have none of that in Rio,” she said proudly. Someone else butts in, “We did have drug wars here in Penha with bullets flying everywhere,” the gestures of bullets whizzing by people’s heads begins, “but not anymore. How do you live in the US without being afraid of dying all the time?”

That is a valid question because there’s a similar question many non-favelados pose to people living in favelas. The media tends to misrepresent reality, especially when it comes to the favela. 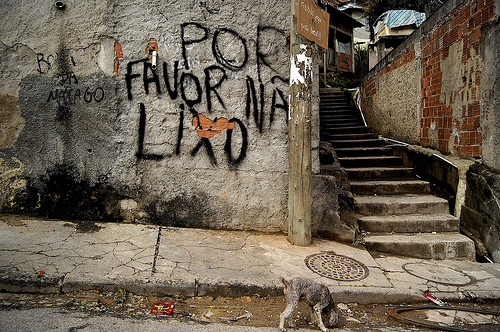 Upon entering Penha, a building scarred with bullet holes greets us. But those marks are years old now. Right below them now stands a more recent graffiti piece depicting the flag of Brazil with the word “Paz” (Peace) in the middle of it. Up ahead is ACONDEC, an organization that raises awareness of the community’s rights and obligations. Besides supplementing the youth’s education in the community, ACONDEC has pushed for a cleaner environment, which can be witnessed by walking around the favela. The organization’s efforts have even affected the graffiti in the area. “No Trash Here” is scrawled on many buildings instead of the usual alien-like symbols, pixação (tagging). The most surprising proof of ACONDEC’s efforts, however, is the unusual change of heart of a former drug trafficker into an environmental activist. 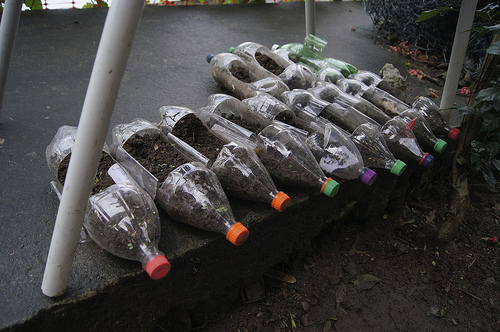 “I’ve done so much damage and caused so much pain,” he told us standing next to the plot of land where he devotes his time to teaching children sustainable gardening, “so now I’m trying to clean up my mess and help the community.” It seems to be working. Above him were bananas hanging from trees and throughout the area were plastic soda bottles made into pots cradling various plants. Some children were helping with the gardening. Others were flying kites. It was a very picturesque scene.

On the way back, one of the visitors, reflecting on the ex-trafficker’s statement confided, “He’s done some really horrible things, much worse than I have, but at the same time I feel like he’s now doing more good than I ever will. That must count for something, right?”

Check out the slideshow of this Educational Community Visit conducted by CatComm here: