In his new book, A World of Three Zeros: The New Economics of Zero Poverty, Zero Unemployment and Zero Net Carbon Emissions, Nobel Peace Prize-winning author Muhammad Yunus proposes social business as a way to reshape many facets of the modern world. As the creator of the Grameen Bank and a pioneer of the field of microcredit, Yunus has helped low-income people around the world empower themselves through locally-rooted entrepreneurship.

Yunus makes it clear that he finds the very founding premises of capitalism to be the root cause of the growing economic and social inequality being experienced around the world. Only through a conscious effort to restructure the economic thinking that governs the world does he believe that we can reverse this destructive trend.

Yunus argues that employing a model of social business could be the solution to this inequitable system. Social business organizations run counter to capitalist assumptions about the very purpose of business itself. Rather than serving as simply a means to maximize corporate profits, social businesses strive to create sustainable solutions to pressing issues in society. Through Yunus’ framework for social business, this movement hopes to create a “world of three zeros”: a world with no poverty, no unemployment, and no net carbon emissions. Packed with a plethora of real examples of social businesses functioning around the world, the book presents a hopeful picture for how dedicated individuals can create a lasting impact on society. 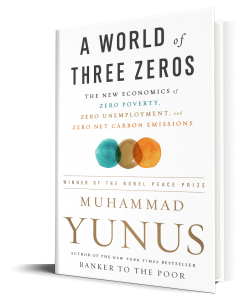 Yunus is a trailblazer when it comes to encouraging entrepreneurship globally. He first gained international recognition for his Grameen Bank in his home country of Bangladesh. Recognizing the challenges faced by poor women in his country when it came to securing credit, Yunus began the Grameen Bank to provide small loans to promote rural entrepreneurship. The bank defied conventional banking, working in small villages, focusing on women, and forsaking any use of collateral. Despite, or perhaps because of, these radical differences, the Grameen Bank has found remarkable success. The bank has grown to serve 9 million women every year, lending over US$2.5 billion, and incredibly maintains a nearly 100% repayment rate. This remarkable phenomenon seems to be the foundation of Yunus’ tremendous trust in the innate good of human nature and the fairly radical idea that nearly all businesses can be economically feasible, even successful, while still focusing their primary resources on promoting positive social change.

Yunus intends to create an entire ‘social business sector’ made up of companies that follow these principles. As he defines it, a social business is simply “a non-dividend company dedicated to solving human problems.” In practice, once a company has paid off its startup loans, the business structure is such that all profits flow back into improving and expanding the business. Success is not measured by dividends paid to board members, but by the amount of people who are reached and helped. Through the promotion of social business, Yunus hopes to bring about a future of three zeroes.

Yunus argues that to solve poverty, society needs to reframe its view that capitalism is the best economic framework. He provides plenty of data to support his claim that modern capitalism has contributed to the growing level of income inequality. A relatively tiny amount of the global population holds an astronomically large share of global wealth. It is well-documented that poverty typically becomes a reinforcing cycle, as the physical and mental consequences of being poor lead to fewer educational and employment opportunities and worse health outcomes. Yunus hopes that through social business and promoting entrepreneurship, this unequal flow of wealth can be reversed.

Yunus discusses the case of Uganda, which many Westerners will be surprised to learn is the nation with the highest rate of entrepreneurship in the world. More than 28% of all Ugandans have started a business in the last three and a half years, and 80% are expected to start a business at some point in their lives. One social business there, Golden Bees, offers supplies and training to help Ugandan farmers learn the skills required for beekeeping. The farmers are able to develop increasing economic independence and Golden Bees stays sustainable by helping to process and market the farmers’ products. Social businesses like this are now working with entrepreneurs across the world, in developing countries like Uganda and Bangladesh but also in wealthy nations like France and the United States, where inequality still exists on a large scale. The French Action Tank in France works to identify and target the country’s poor, who may be harder to immediately identify than in poorer countries. Similar projects are being incubated in India and Brazil as well.

It is a compelling case that people in the developing world are in fact more predisposed to entrepreneurship when one considers the millions employed in micro-entrepreneurial ventures in the informal economy, which encompasses more than 60% of the labor force in many developing countries. By removing the barriers to entrepreneurship faced by poor people and shifting the narrative around ‘informal’ or ‘grey market’ employment, Yunus believes poor individuals can economically empower themselves and radically improve their lives.

The second core issue that Yunus identifies, is an unnecessary reliance on others for employment. The view that we depend on others for employment limits the potential of individuals and puts them in a tenuous position in society. People, especially young people, who spend several years unemployed or underemployed tend to face lifelong consequences in terms of income and job security. Yunus suggests that unemployment is not a problem of individuals but of a system that encourages reliance on job markets rather than job creation. Social businesses can help encourage entrepreneurship and financial independence and thus alleviate the problem of unemployment for populations that conventional markets often fail to reach, like the rural poor. The model can also help employ those who may be otherwise traditionally overlooked in formal employment opportunities, like poor women, former prisoners, or those lacking formal education. Local, small-scale social businesses also help stem wealth inequality trends by preserving wealth within a community. Yunus asserts that microcredit and social business development can help turn people from job seekers into job creators, all while addressing important social needs.

Finally, Yunus hopes to use social business to address global climate change. Contemporary debates over climate change policy often center on the balance between supporting economic growth and protecting the environment, especially for developing nations. Yunus, in the relentlessly positive tone he maintains throughout the book, suggests that these two goals need not conflict. Sustainable business strategies can grow economies while being environmentally responsible. What is more, the youthful nature of developing country economies make them inherently well-positioned to embrace sustainable business in their path to growth.

He points out several new businesses focused on sustainability that are using the social business framework to protect the environment and support their communities. Social businesses are helping to bring solar energy to rural Bangladesh, reforest Haiti through the production of forest-based goods, and reduce plastic waste accumulation in Uganda. Because they are unconstrained by profit-maximizing agendas, social businesses often have greater flexibility in addressing environmental challenges.

Yunus sees this third goal as of equal importance as zero poverty and zero unemployment, as the impact of climate change is historically felt most strongly by the world’s poor. Through no fault of their own, the poor suffer the most from society’s inaction on climate change. With this in mind, Yunus insists that all social businesses must be environmentally sustainable to ensure that they are not fixing one problem while contributing to another.

Even those who are not directly involved in social business themselves can help reach the “world of three zeros.” Yunus suggests a series of ways to accomplish this global change:

In the face of massive global challenges like widespread poverty, income inequality, and climate change that are intensifying every day, A World of Three Zeros is a refreshingly positive and propositive read. Yunus is able to break down a somewhat radical concept—that global society would be better served by an alternative economic system—into actionable goals and strategies for achieving them. What the book’s inspiring outlook perhaps fails to fully address is how the greed and corruption of a powerful few can limit the impact of many positive actors, and how to effectively counter such a seemingly overpowering barrier. For each talented young person eschewing the corporate sector for social entrepreneurship, there is also a significant level of buy-in from entrenched politicians and profit-maximizing corporations. Yunus addresses this issue in chapters about good governance and financial infrastructure, by highlighting the Giving Pledge taken by 150 of the world’s wealthiest people. While this is undoubtedly a step in the right direction, a peek at today’s priorities of governments in many of the world’s largest countries leaves some doubts about the capitalist system being modifiable in any meaningful way in the near future.

Yunus, to his credit, maintains his inspiring message throughout and looks only to the future, which he feels is an age of great possibilities, propelled by the immense wealth, potential, and creativity of the modern world. For anyone feeling bogged down by the diversity and scale of global problems in 2018, A World of Three Zeros can provide both an overarching framework and some concrete ideas to make positive change happen at both the local and global levels.