For the original in Portuguese by María Martín and Talita Bedinelli published by El País click here.

There was no respite from the Brazilian political crisis during this year’s Carnival. Not only in the street, as was more common in previous years, but also in the sambadromes of Rio de Janeiro and São Paulo. This year the samba schools brought blunt and extremely direct social critiques to the samba runway. The most notable case was that of Paraíso do Tuiuti—a samba association born on the hill of the same name in São Cristovão in Rio’s North Zone—which surprised the public during last Sunday night’s parade and sparked enormous reverberations on social media. With the theme of “My God, My God, Is Slavery Extinct?” the school critiqued working conditions in the country and, beyond that, the current government, which is responsible for the labor reform passed last year.

Thiago Monteiro, the school’s Carnival director, explained to El País that the theme was chosen through a competition. “The objective was to discuss the exploitation of man by man himself. Not only the enslavement of black people, but the fact that exploitation has persisted for centuries, passing through the Egyptians, the Celts, the Romans, and continuing in the current day. It makes a person work 12-hour days, like seamstresses, for a salary sometimes below minimum wage and with minimal rights, and this perpetuates the system,” he said.

While the vanguard of the school’s parade presented “The Scream of Freedom,” showing slaves who had been whipped emerging from their quarters, the last float brought a vampire wearing the presidential sash, resembling Michel Temer. He was on top of a float called “neo tumbeiro,” or in other words, a slave ship of current times. The newspaper O Globo reported that chants of “Get out, Temer!” were heard across the sambadrome. Between the last and the first float, the parade of 29 sections and 3,100 participants also featured manifestoches, a play on the Portuguese words for protest (manifestação) and puppets (fantoches). These paraders dressed in green and yellow, the color which marked protests in favor of the impeachment of ex-president Dilma Rousseff. They were being manipulated by puppet strings held by an ‘invisible’ hand and around their waists sat yellow ducks, a symbol of the complaints that the Federation of Industries of the State of São Paulo (FIESP) made against the previous administration. They also carried pans in their hands, another symbol of those protests.

“As we spoke of the exploitation of man by man, we wanted to include the decline of social rights. Through the ducklings, you represent a previous situation in which rights were well protected and, from the moment that a new political order takes control of the country, you have new reforms that, in the samba school’s perspective, remove social rights from a portion of the population. The school wanted to question if those who wanted this change are not also the victims. Does that person who took to the streets not have these rights reduced too?” explained Monteiro. 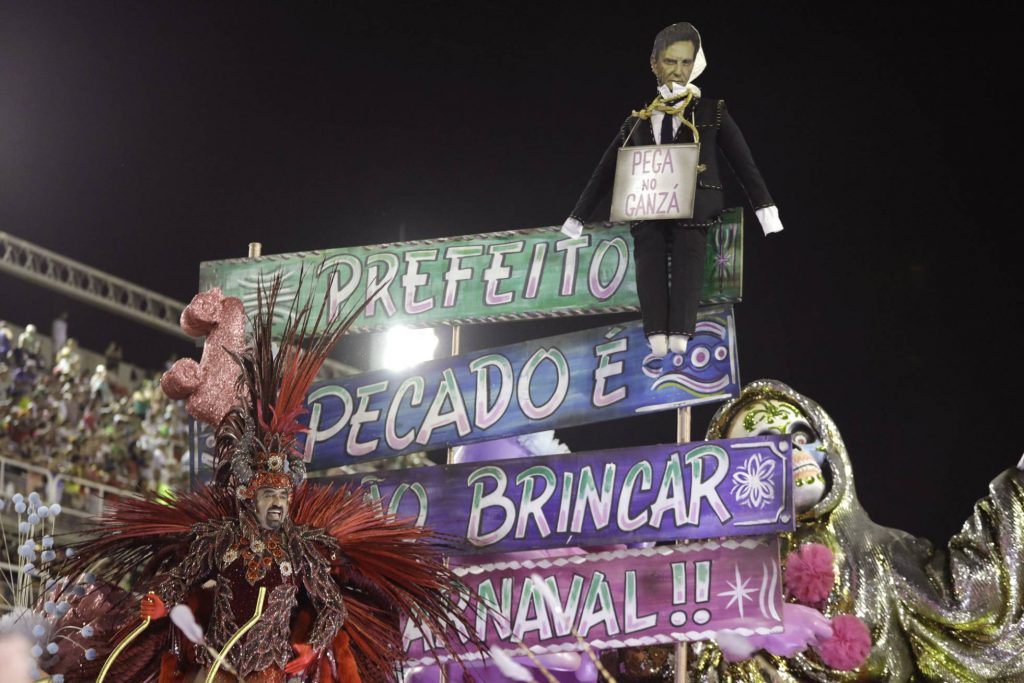 The overt critiques from Paraíso do Tuiuti left commentators from TV Globo silent as they broadcast the Carnival parade live. While the previous sections of the parade were explained in detail, the section mocking protesters received a single quick comment of “the manipulated, puppets,” before the commentary quickly moved on to “Jú, 120 [centimeters] in the hip,” in reference to the samba dancer shown in the next image. On social media, the school was praised for the courage of its critiques. “In pre-Carnival, when the theme of the plot was revealed, we immediately got an interesting response, but this huge response after the parade surprised us. We are very happy,” emphasized the Carnival director. But there were also people who, on the Internet, considered the parade to be a “disservice,” meriting the samba school’s demotion.

On this first night of parades for the top ranked samba schools, Mangueira also provided a direct critique of the current mayor of Rio, Marcelo Crivella, who was represented by one of the allegorical floats as a Judas doll, like the ones that can be seen on Holy Saturday. The doll representing the evangelical politician was accompanied by the phrase: “Mayor, it’s a sin not to celebrate Carnival.” The school criticized the cuts made by the City to reduce the budget allocated to Carnival schools by half, and its theme was, “With money or without money, I will play.” Beija-Flor, which paraded on Monday night, also brought a political carnival to the sambadrome with its plotline: “A monster is that which does not know how to love. The children abandoned by the homeland that gave birth to them.” The theme addressed the neglect of poor children and adolescents, making connections with corruption. In São Paulo, there was also political critique with the return of X-9 Paulistana to the top group on Saturday—the float “The House of Mother Joana” displayed politicians, some with the presidential sash, and judges covered in mud and carrying suitcases full of money and money in their underwear.

Leonardo Bruno, a columnist for Extra and a judge for the Gold Standard, a prestigious unofficial prize for Rio’s Carnival, believes the samba schools have never played this role of being so critical of society, which, for him, is more common among Carnival street parades, or blocos. “The schools have always had a different characteristic, so much so that [their] samba plots are considered music in the genre of epics, narrating major events, major conquests, and major achievements,” he explained. “Now, on the other hand, what we observe is that in moments of extreme turmoil, when society is most needing to cry out against something, samba schools assume this role of social and political critique.”

He highlighted that this has been seen in two previous moments in the history of samba schools. First, in the late 1960s and early 1970s, at the peak of the military dictatorship in Brazil. Three memorable performances during this period spoke of freedom. The first, in 1967, was when Salgueiro paraded “The History of Freedom in Brazil.” Two years later, in 1969, Império Serrano performed “Heroes of Freedom.” And, in the Carnival of 1972, Vila Isabel presented the story, “Where Brazil Learned Freedom.” It was a time during which censorship was at a high, and the schools were able to vent this repressed cry for liberty.

In the mid 1980s, Bruno explained, the Caprichosos de Pilares and São Clemente schools also addressed the troubled moment as Brazil made steps towards democracy but the population had not yet voted. They brought the rallying cry of “Rights Now!” to the runway and carried banners discussing the Constituent Assembly. “They were very critical plots for the time,” Bruno reflected. There was also, in 1989, the famous parade of Beija-Flor, in which Joãosinho Trinta created a beggar Jesus Christ in order to critique poverty but the allegory was prohibited by the courts at the request of the Catholic Church. By the end of the 1990s and into the 2000s, when the country lived in more economic and political stability, critical storylines were left to the side, the journalist recounted. “We need to think, as a society, about what moment we’re in now as a country, because the schools reflect what happens in the streets. For these critiques to have arrived at [the] Sapucaí [sambadrome] is because the moment is one of dire crisis. Samba schools, in general, are the last place this critical voice reaches, they resist a lot. It is a moment of turmoil at all levels of government.”