On February 6 at 5pm, resident-demonstrators gathered in front of the Rinaldo de Lamare Citizenship Center in the Rocinha favela, in Rio de Janeiro’s South Zone. At the same time, residents of nearby Vidigal and Chácara do Céu favelas gathered in the public square at the base of Vidigal. The two groups joined forces for a peaceful combined protest, then marched down Avenida Niemayer to Governor Pezão’s house on Rainha Guilhermina Street in the wealthy neighborhood of Leblon.

Arriving at the meeting point, it was impossible not to notice that the number of Military Police seemed to be equal to or even greater than the number of demonstrators gathered for the peaceful protest. One officer informed us that there would be even more police officers arriving soon, resulting in 40 officers in total. For Denis Neves, one of the residents who organized the protest, the current climate of tension and violence in Rio explains why fewer people than expected attended the protest. That same afternoon, the Linha Vermelha and the Linha Amarela highways were closed and Maré was experiencing yet another day of violence.

Despite these barriers, the participants were determined to take to the streets to get people to listen to what they had to say. As Neves explained, “the idea is to leverage this moment that Rocinha and Rio de Janeiro are living through, and that favelas and poor people experience every day—to instill a message of peace.” Various posters expressed the main message, that Rocinha and Vidigal residents can no longer stay silent:

Residents went out to protest the grave situation they face, with the Emergency Care Unit (UPA) and the Family Clinic on strike, the Park Library and the bike lane shut down, continuous violence, and the lack of electricity, water, and sanitation.

“We want peace, we want to be able to come and go, have the right to stay in our homes, live peacefully, go to work and come back peacefully,” explained Francisca Oliveira, who has lived in Rocinha for 50 years and is known as ‘Chica de Rocinha.’ Since September 17, 2017, Rocinha’s 200,000 residents have been living in fear and insecurity with shootings happening daily. Another resident expressed herself via the microphone, taking part in the protest on Niemeyer Avenue: “We have been suffering for months now and they say it is war but we are not at war. We are suffering due to a process whereby the State is criminalizing the favelas—that is the reality. The State wants to eradicate favelas, our space, our people’s movement, our identity. We want peace. Enough, enough with the violence, enough with invading our homes and breaking our things and taking what’s ours.” Other cries could be heard: “We are not a [criminal] faction, our ‘faction’ is we’re residents”; “Only we from the favela know what shots these are”; “This here is a favela, not a mess.” 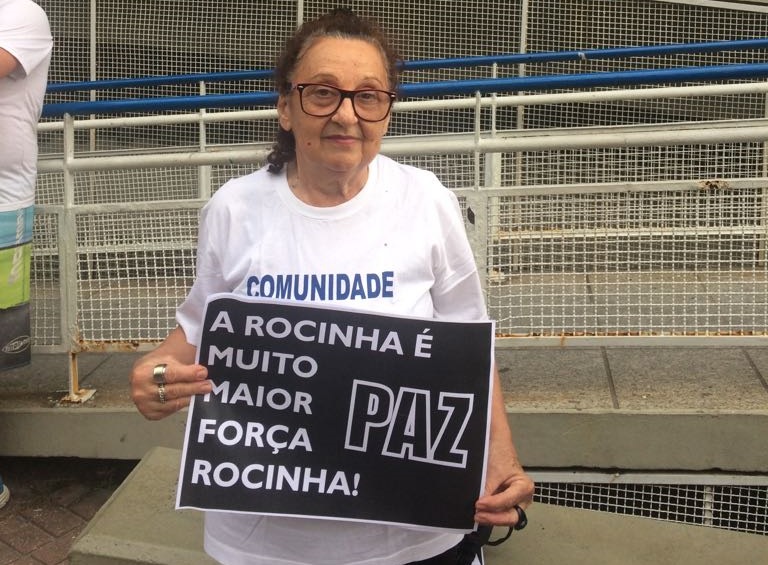 The march arrived at Vidigal’s Square at 8:30pm, encouraging residents to join in: “Vidigal, come to the street!” There, protesters took a minute of silence in memory of the two victims of a truck accident that had occurred the day before. The poor state of the roads and the precarious means of transport in the favela are one more concern that residents face daily. For Chica, “violence is the result of a lack of competence and responsibility by the authorities. If all the authorities did their jobs, I believe that the violence would not reach this point. We want respect, we demand respect, especially from the very people we elected.”

With these messages, the protest arrived at Governor Pezão’s street in Leblon: “Pezão, come out and see us, you were in Vidigal looking for votes, you were welcomed in Rocinha, Vidigal, and Chácara do Céu! We are now asking for respect for our people.” The protest ended with a theatrical act by the Bando Cultural Favelados in front of Governor Pezão’s building on Rainha Guilhermina Street. The young actors acted out scenes from their daily lives of violence and prejudice against black people, and girls and women generally, living in the favela. The peaceful protest concluded in front of the governor’s building with the hope that in this election year, the residents of Rocinha, Vidigal, Chácara do Céu, and all of Rio’s favelas will choose candidates who truly represent them, rather than letting themselves be deceived once more by false campaign promises.