From August 2 to 24, the play Careful with Neguin was shown at Casa Rio in Botafogo. The project took about a year to get off the ground and was made possible thanks to seventy supporters to its crowdfunding campaign. The play was intended to be accessible to all audiences with an open box office where spectators only contributed what they could afford.

Created and performed by Kelson Succi from Complexo do Alemão, a complex of favelas in Rio’s North Zone, the play tells the story of a “neguin” [a term referring to a young black person] who experiences the range of difficulties imposed by racism in Brazilian society. With a tone that is sometimes funny, sometimes ironic, and sometimes sad, Succi captivates the audience with ease, clearly exposing racism in everyday situations. The very use of the term “neguin” as the name of the protagonist exposes the frequent and negative generalization of black people.

Audience interaction was also important. As a monologue in a small space, Succi manages to create an intimacy with everyone present—looking into each person’s eyes and asking questions, touching people’s hands, and even asking for help. In one scene, the actor greets a white man in the audience and playing with a slang phrase tudo nosso (literally “it’s all ours” but meaning relax, what’s mine is yours) says, “Hey, branquin [white guy play on words based on the term ‘neguin’]? It’s all ours? Or is it all yours?”

What is interesting about the play is that it shows various perspectives on the life of a “neguin“—none of which are free from racism. For example, there is the ostentatious “neguin“ who got rich through funk music and today is criticized for his style. There is the sophisticated “neguin,” wearing a scarf and dark glasses, who fell in love with a rich man on Farme de Amoedo Street [a street associated with upscale gay culture in the wealthy beachfront neighborhood of Ipanema] and forgot his past. There is also the “neguin” who drinks a beer with his friends in the similarly upscale beachfront neighborhood of Leblon, decides to go to well known BB Snack Bar to buy cheese bread and scares a white girl, who holds her bag more tightly and quickens her pace. After all, you have to be careful with the “neguin!” he declares. 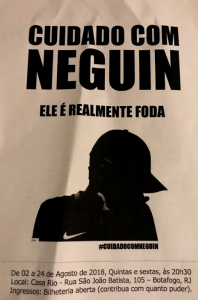 In addition to denouncing racist behavior, Succi seeks to expose white privilege in society. In one of the first scenes, the protagonist tries to open a locked door. Upon asking for help from a white man in the audience, the door opens easily. This metaphor is further explored during the play with a critical look at “branquins” who spend years at university studying slavery and then think that they understand more than the “neguins” themselves.

The objective of the play is to open up a dialogue that denounces racism and mobilizes society to create change. Despite minimal space, costumes, and set design, Succi manages to communicate an extremely important message, loaded with indignation. As this first season of performances came to an end, Succi announced: “There’s going to be more NEGUIN on the stage soon! Join us!”