Click here to see Pica-Pau on the EcoCitizen World Map!

Equipped with a GPS, voice recorder, and pair of cameras, my partner Ana Puhač and I entered Pica-Pau, Cordovil looking to compose a profile of the social, economic, and ecological dimensions that color life in the North Zone favela. Over two months, Irenaldo Honorio da Silva, president of the community’s Neighborhood Association, led us through its alleys and inclines, his quick voice detailing the problems that have festered in the long absence of government services, and the efforts that have emerged from both residents and municipal government to turn the tide.

We now present our observations on the interactive EcoCitizen Map, built on the Ushahidi platform by EcoCity Builders, an NGO “dedicated to reshaping cities for the long-term health of human and natural systems.” These reports can be viewed on a separate Esri interface, layered alongside data extracted from social networks as well as studies on land use and landslide risk. The right composites, we hope, will highlight linkages between geography and its social outcomes. 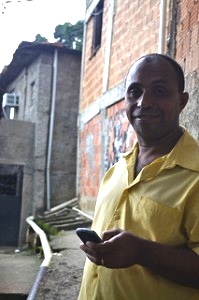 Common themes on RioOnWatch make their appearances here: waste that swelters in the absence of sanitation, schools that fail to prepare their children, drugs that corrupt the bodies and human relationships of their dependents. Constant readers will remember the deteriorating houses that cling to the side of its hilled slope.

A history of government interventions that are dreadfully out of sync with the priorities of its people has left its mark on the expectations of the population, who, fearing empty politics, hesitate to get involved in upcoming projects that proclaim “participation.” And residents organize to provide for themselves, tackling those said problems with the force of collective action.

The goal of the EcoCitizen map is, first, to trace the well-being of diverse human settlements throughout the globe – and then to use this information as a vehicle for transformation. Since Pica-Pau is the first community to have both its assets and issues mapped (previous excursions have only documented efforts and achievements rather than areas of necessity), this project hopes to inform solutions to some of the community’s problems, and at the same time bring light to the capacities of an often maligned favela population. With the City government’s urban integration project, Morar Carioca, in the horizon, this could serve as a valuable inventory of the problems that call for solutions in Pica-Pau, as well as a reference point for evaluating Morar Carioca’s long-term efficacy.

So – what happens now? What are the next steps? This platform will eventually be presented to the community of Pica-Pau, potentially mobilizing community members to provide more detailed reports of the situation in Cordovil as it develops. Some of this information has been uploaded to Mootiro Maps, another interactive map that has seen a recent surge of interest and participation from residents of other favelas. And EcoCity Builders has located more volunteers who will attempt to replicate this project in similar communities throughout the world.

Then there’s your role. Play with the Esri site and smoke out connections. If you’re fluent in Portuguese, assist us in providing more accurate translations. Leave comments and questions on the reports that we will forward to Irenaldo, piecing together a better understanding of Pica-Pau’s situation through dialogue.