For the original article in Portuguese by Pedro Prado and Cecilia Olliveira published by The Intercept Brasil click here.

“They’re going to invade Morro da Coroa, in Catumbi.” I got this message at 10:18pm on Friday, February 1, as did many many others via WhatsApp. In six days, this “prophecy” was fulfilled. For three days in a row, there was a shootout in the area until the police intervened a week later, killing thirteen people. According to witnesses, ten were killed inside the house of a resident who is not in any way involved with drug trafficking in Fallet–Fogueteiro, a neighboring favela in Central Rio that is also under the control of the Comando Vermelho (Red Command).

“We’re the ones who suffer the losses. They do this here and walk away. And the families, how are they affected? Aside from the psychological damage—which is the most severe. An elderly lady, family members, all hard workers,” explains the son of the owner of the house where the shooting took place. His mother appears to be around sixty years old, and of course, did not want to talk to anyone. Everyone is afraid.

Her son is a cargo handler and was at work when he heard about the massacre committed inside his mother’s house. He lives in another house on the same plot of land, where his son was at the time. Afraid of losing his son, he ran back home and arrived to find everything in pieces: countless bullet holes in the ceiling, walls, and furniture—blood in several rooms, the laundry sink and plaster on the floor.

The press office of the Military Police stated via telephone: “We cannot confirm whether or not these shots today were fired by Military Police [officers],” referring to the shootouts between drug traffickers that had taken place the night before and the week prior. Two factions fight for control of the region: the Comando Vermelho and the Terceiro Comando Puro (Pure Third Command). The press officer also stated that an expert report will be necessary given that “in every case in which a citizen feels aggrieved by an action undertaken by authorities, the citizen must contact the Public Defender’s Office.” 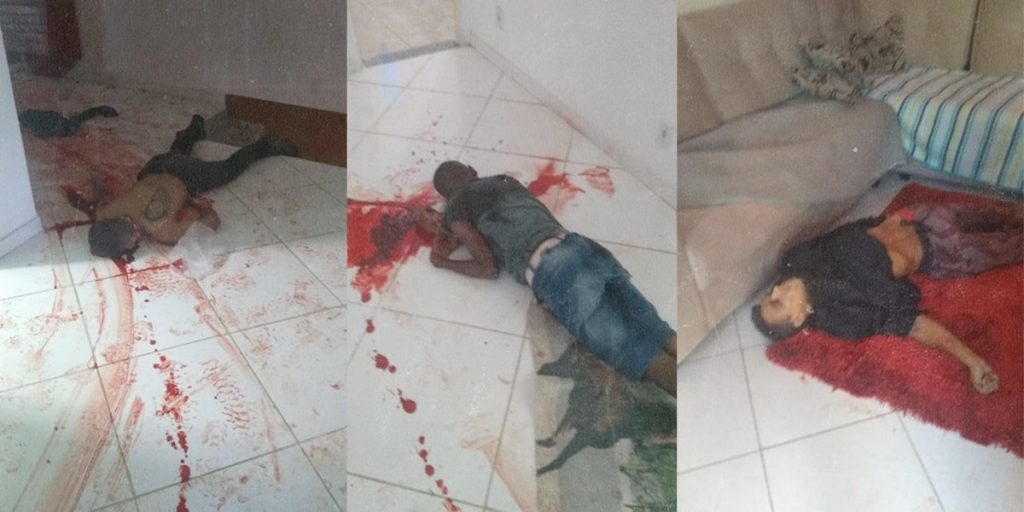 In a statement, the Military Police said that “after the shooting ceased, ten wounded criminals were found on the streets of the community.” Images obtained by The Intercept show that at least three people were killed indoors.

Execution of People Who Had Already Surrendered

“The shots were fired in here. Inside the house. These were close-range shots. From the top down,” said Josias, a neighbor, pointing to the holes in the roof of the property. His story corroborates Josué’s account, who was working nearby at the time: “We were twenty meters away from the house where the police were. They surrounded the house. There were no residents on the right side. So we went to the left side and we saw. After the shooting, they put the bodies in the dumpster,” he said. Three different people confirmed to The Intercept that this was an execution of people who had already surrendered.

The police officers who were involved in the operation are being questioned by the Homicide Division of Rio’s police. According to the police, the officers’ weapons have been turned over as evidence for the expert report.

Aside from the victims, four people were arrested in another house. They are alive because they were able to negotiate with the police after holding the homeowner’s family hostage. This was the most violent police operation in Rio de Janeiro in over twelve years. During his campaign—and as already seen during his administration—Governor Wilson Witzel promised a war. He is already delivering on his promise to the people.