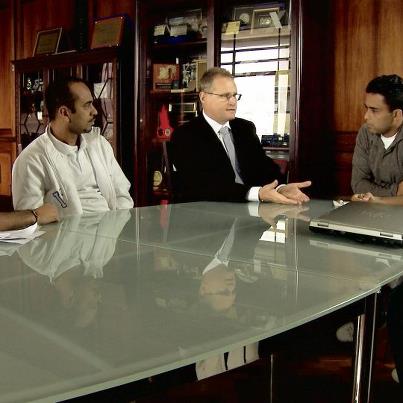 An evolving project, one that will not solve all of Rio’s problems, much less from one day to the next. This is the realistic and confident way in which Rio State’s Security Secretary José Mariano Beltrame defines the Pacifying Police Units (UPPs) implemented through much of Rio de Janeiro. In an interview with Vidiga! after an exhibition of the film ‘5x Pacificação’ (5x Pacification), coordinated by Cacá Diegues and directed by Cadu Barcelos, Luciano Vidigal, Rodrigo Felha and Wagner Novais, the same group who directed ‘5x Favela – Agora por Nós Mesmos’ (5x Favela – Now by Ourselves), the secretary shared his take on the film as well as on the specific case of pacification in the Vidigal community.

The movie, comprised of five short films and interspersed with directors’ comments—all of whom are residents of favela communities, not all pacified—dissects, analyzes and exposes pacification in a balanced way. Beltrame commented on controversial points, such as police corruption and amnesty for traffickers, raising the latter to the possibility of discussing the subject nationally for the first time.

Does the documentary represent the UPP project well?

I think it represents them well because the UPPs aren’t a finished project. UPPs have to change. It’s what I always say: the world will not be colored on Monday. The UPP is not the solution to all the problems, it’s merely the possibility of other things to come, others then must do more.

Photographer Maurício Hora, resident of Providência, says in the film that the UPP came to save the communities from the police. What do you think of this statement?

I also think it’s a bit of that. Why not? You have a police that is prepared for war and, by waging war, absorbs the spoils, that’s the point with corruption, appropriating everything the war brings. I use the example of the Louvre in Paris: it’s a marvel, but it is full of spoils of war. When the police officer is thrown into war for 20, 30 years, it’s internalized in him. The UPP is taking him out of that, saying: “let’s stop waging war, settle here and provide for the arrival of peace.”

In another scene, José Júnior [AfroReggae founder] proposes amnesty so drug traffickers can start a new life. Is there any possibility of this happening?

When speaking about this we are entering a totally legal topic, still at a very high judicial level, because it’s an expedient in Brazilian criminal proceedings that falls under the President of the Republic. These matters need to be greatly discussed; it’s not a simple yes or no answer. You have to broaden those horizons, talk about it a lot, because maybe you then find a way out. Maybe it won’t be amnesty, or a bit of amnesty, or even precisely amnesty. It’s something very new, something we need to let mature. The whole society needs to mature. Even the judiciary, who will have to make the decision. It has to be broadly debated and, who knows, the movie could begin to raise this discussion.

Before, assaults didn’t happen in favelas, but now many suffer them. In Vidigal, for example, when someone is assaulted or robbed, the UPP doesn’t record what happened and asks residents to go to a police station… I myself went through this.

A person who is safe in an informal setting, controlled by a tyrant, with people carrying guns, minors with automatic weapons… I’m not sure you can consider this ‘feeling safe.’ If that [an assault] happened to you, at the very least the police officer responded wrongly, because he could get a squad car and drive you to the station to proceed with the report, or communicate with another officer to do this if he can’t leave his post, or lead to a police station. That’s the rule.

Secondly, there’s another aspect that must be considered: today, you were assaulted and there’s the possibility of reporting it at a police station. Before, you weren’t assaulted, but they burned people alive and you couldn’t go to the police. Before, minors were thrown into the drug traffic. Today, police activity begins to show that a community of 50,000 is almost a city. So I’m not going to say that it’s normal for assaults to occur, but these things begin to happen in daily life like in great metropolitan regions. But the police officer should, at the very least, have attended to you better.

Another problem that Vidigal – and other favelas in the South Zone of Rio—are experiencing is the threat of “white eviction” (gentrification), investors entering in search of valuable land…

I think that that is something that can happen, because this is a phenomenon that is made possible through pacification. I guarantee that it’s not the police that are doing this. It’s some interest, some agency that has to fulfill its role of monitoring and organizing this and isn’t. It was the trafficking, the tyrant, who did this before. Now that part of Vidigal is giving more work to some agencies that didn’t have to worry about it before, because it was informal. It didn’t exist, now it does exist. Now the municipal or state secretariat of housing, or whatever agency it is, has to carry out its responsibility of going there and certifying them. The state allowed those people to establish themselves there, how can it now go and simply make a counter-order? It’s not a question of the police force. But this is a phenomenon that the UPPs brought with them and that other agencies have the obligation to come in. It’s like I say: it’s not the presence of the police inside these areas that’s going to consolidate progress. This time you can’t blame the police. The rest have to execute the job that should have been done 30 or 40 years ago.