This is the latest contribution to our media watchdog series on the Best and Worst International Reporting on Rio’s favelas, part of RioOnWatch’s ongoing conversation on the media narrative and media portrayal surrounding favelas.

We tend to open this column rebuking international correspondents for, year after year, focusing exclusively on violence in Rio de Janeiro’s favelas. We have repeatedly explained how this sort of negative coverage contributes to imbalanced, negative stigmas surrounding favelas, and that such media-perpetrated stigmas reinforce a historic narrative that in turn generates support for punitive and equivocal public policies that ultimately lead to more human rights abuses, and generate only greater violence and inequality in Rio de Janeiro. This year was proof, with the public electing a government primarily on its promise to double down on hardline actions towards favelas.

Thus in 2019, Rio de Janeiro police killed more people than they had in any past year on record. Stoked by hardline rhetoric from newly-elected Governor Wilson Witzel, Rio security forces killed with the confidence of near-guaranteed impunity. In this context, the relentless waves of bloody headlines flooding international coverage of Rio favelas were warranted and necessary; effective journalism must hold public officials accountable for their words and actions. However, we at RioOnWatch continue to insist that solutions-based, pro-positive reporting is imperative to deconstructing violent and inaccurate stigmas surrounding favelas and that Rio will only be relieved of its toxic reality and begin to realize its potential through widespread deepening of such perspectives.

The focus on State-sponsored violence may have led correspondents to miss some of the biggest positive stories coming out of Rio favelas last year. Why didn’t we see, for example, coverage of Complexo do Alemão’s Lucas Lima, who, at 24, built his own low-cost 3D printer. Or the Unifavela college entrance exam prep course in Maré that had 100% of its students accepted into university. Or more on the fight to bring solar energy to favelas across Rio. The peripheries of Rio continue to produce innovative solutions to modern challenges, and we do the world a disservice by ignoring the potency of these territories.

Witzel’s ultra-violent discourse (including: vows that police would shoot criminals in “their little heads;” toying with the idea of sending a missile to blow up City of God; repeated appearances in uniform; and a machine-gunning helicopter trip) featured prominently alongside a string of horrific accounts of police violence. The killing of 8-year old Ágatha Felix, a massacre in Fallet-Fogueteiro, the 257 shots fired at the car of musician Evaldo Santos, the shooting of Brazilian jiu-jitsu instructor Jean Rodrigo Aldrovande, and a string of unarmed youth caught by “stray bullets” all roused international correspondents to produce excellent, meaningful reporting. The best of these articles highlighted residents’ voices and critically examined official police statements:

Other, thematic pieces did well in conducting wide-spanning interviews with residents, community leaders, and public officials. This broad AP piece on the city’s divided opinion over violent policing methods does just that, clearly establishing the strategy’s human cost. Others, such as these in-depth pieces from The Financial Times and Bloomberg dug deep into the increasingly critical topic of Rio’s growing militia groups.

Special recognition goes to this excellent op-ed piece for The Washington Post, “Another fire is raging in Brazil — in Rio’s favelas.” Also, the months-long bullet-casing analysis conducted by The Intercept in partnership with NGO Sou da Paz and the Swiss Small Arms Survey research group effectively demonstrates the international scope of Rio’s armed conflict.

Though not favela-specific, several other articles did well in providing political background for Rio’s violence. This Al-Jazeera piece traces the origins of 2019 policing through the legacy of Rio’s 2018 military intervention. And former RioOnWatch collaborator Stephanie Reist effectively situates the State’s mix of bloody policing and militia involvement in a framework of necropolitics for Jacobin Mag.

Last, this piece for the April 2019 issue of The New Yorker may be the single most comprehensive write-up on Jair Bolsonaro’s Brazil to date. 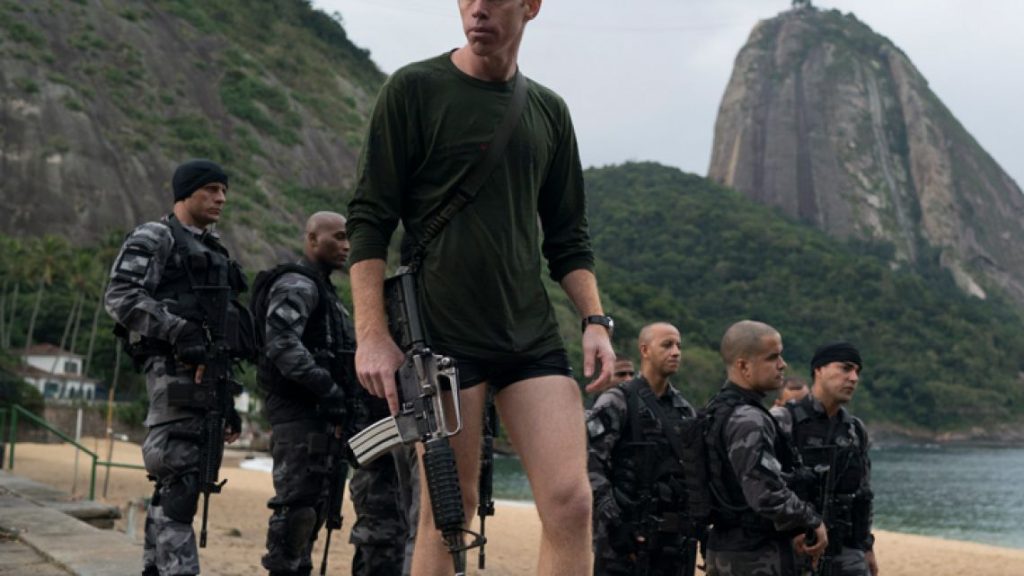 Some fell short. An otherwise brilliant Washington Post article fell apart with a single sentence when it stated that Witzel’s “crackdown might be showing results. Rio’s homicide rate fell 24 percent in the first two months of the year, government figures show.” The unsubstantiated claim (draped in a “might”) undermines the article’s greater purpose, egging on a false causation that has been widely debunked by public security experts, both in relation to President Jair Bolsonaro’s policies on the national level and Witzel’s actions on the state level (see here, here, here, here, and here).

Other publications have continued to glorify the police, fawning over movie-style tactics and war technology, as in this bizarrely-idolatrous CBN piece on Rio’s BOPE elite police force, in which the Christian news team “traveled into a favela with them for a training mission – it’s a safer neighborhood because they’ve already cleared it. But you can see the tactical way they learn to move, because you don’t really know who the bad guys are until they are shooting at you.”

Best Reporting on Favelas in 2019

Thankfully, positive stories were not entirely lacking last year. And neither was coverage keeping a spotlight on the political assassination of Marielle Franco or reminding audiences of the critical neglect of public services in favelas.

Two articles for Catholic Philly and the Jesuit America Magazine deserve note for delving into the history and current role of the Catholic Church in serving the favelas. The former, despite its clickbaity title—”Slum Jesus to be part of Rio de Janeiro’s Carnival in 2020“—gives an opening look into the Mangueira Samba school’s efforts to retake Jesus’ legacy from the Christian right.

There was also an interesting unexpected dispatch from Iowa’s The Scarlet and Black, covering a collaboration between Maré activist Henrique Gomes da Silva and Grinnell professor Nick Barnes.

Last, we were taken aback by this remarkably progressive favela food tour undertaken by Youtuber Mark Wiens. With a tone that ranges from genuinely curious (clueless at times) to sincerely grateful, Wiens manages to destigmatize without falling into the trap of romanticization.

The worst articles on Rio favelas trumpet the same old tropes. As RioOnWatch continues to urge publications away from the stigmatizing and inaccurate translation of “favela” into terms such as “slum” and “shantytown,” mainstream and fringe publications alike have stubbornly protected their style guides. In the best cases, these translations read like wince-worthy blips in otherwise stellar reporting. In the worst cases, they are symptoms of the writer’s glaring unfamiliarity with favelas. The following articles fall into the latter category, treading ground somewhere between intellectual dishonesty and condescension.

When a boozed-up Australian tourist decided to wander into the hills of Morro do Adeus in Complexo do Alemão, the Daily Mail Australia jumped in, explaining that “A favela is a crime-ridden slum, or ‘shanty town’, in Rio de Janeiro which is home to 1.5 million people from low-income households. Favelas lay on the outskirts of the city, and have long been dominated by gangs who traffic illegal drugs.” The text, surrounded by party pics of the Australian in question and a pair of unrelated mugging videos, makes a series of inaccurate statements.

A favela is not a crime-ridden slum, as many favelas have little crime at all, and a cursory Google Maps search would have shown the author that many of Rio’s most well-known favelas are concentrated in the heart of the city. “Favela” is not synonymous with gang presence, and as to the question of favelas being “long dominated” by gangs, Rio’s principal organized crime groups only began consolidating control of favelas in the 1980s. The first official favela, in comparison, was settled in 1897 and there are others that predate even that.

Travel pieces tend to veer into similarly safari-sounding language, as is the case with this travel piece for The Telegraph on the top cruise-accessible cultural destinations in South America. In three sentences, the blurb on favelas manages to do nearly everything wrong: “Favelas are the slums, or shantytowns, of Brazil. Not immediately the most alluring excursion destination, but the millions who live in the shacks call them home. Rio’s hundreds of favelas have produced renowned samba and artistic talent and many tourist visits are conducted by guides from these communities.”

Leaving aside the fact that this blurb misses an opportunity to connect readers to resident-led tours—the paragraph mentions a cruise company-operated “educational” favela tour to Rocinha and links to a £2500 cruise to Buenos Aires—one has to wonder why the author would juxtapose this sort of home-shaming (“the shacks”? Has he been to Rio?) with a lackluster pitch for wealthy travelers.