Carnival 2020 starts today, and if you’re one of the 1.9 million visitors flooding into Rio de Janeiro, you may find yourself looking for a deeper understanding of the Cidade Maravilhosa. Taxiing in from the airport, you may wonder about the crowded brick houses, oftentimes behind a façade, lining the highway. Or the kites flying overhead. Sunning yourself on the beaches of Ipanema, you may find yourself admiring the lit-up hillside overlooking the luxury Sheraton Hotel. Dancing through carnival blocks in the city’s downtown Centro area, you may realize you know nothing about the history of the 123-year-old Morro da Providência. You may realize you want to visit a favela.

If someone in your group suggests going on a favela tour, get ready for an argument. A divisive topic among cariocas and socially conscious foreigners alike, favela tours get funneled into one of two categories: depending on who you ask, they’re either empowering or voyeuristic. They either deconstruct preconceptions or they exoticize. They’re either deeply human, equitable experiences for both parties, or they’re safaris.

They can be either. The difference is made by the intentions of the visitor and those of the guide. Amid the tour ventures and businesses that sprung up in the years prior but boomed in the wake of the city’s mega-events, some were founded by favela residents, others by outside tourism agencies looking to capitalize on the opportunity. Nowadays, tours range from notoriously dehumanizing jeep tours to informal resident-led walking tours or full-fledged open-air museums run by favela-born-and-raised activists or academics.

Your experience—and the damage you do—largely depends on what your intention is when you visit (check yourself: are you genuinely open to learning, curious, and appreciative; or are you coming to check a box and take photographs of ‘how others live’), and who you decide to go with (do they have a stake in the community’s past and future, and are residents benefiting from the tour?).

For the activists below, dedicated to fighting for recognition for—and improvements in—their lifelong communities, tours are essential to breaking down the stigma and exoticism that compromise those outcomes. Tours provide a direct line between activists and outside visitors, many of whom would otherwise draw their perceptions from violent media coverage. “The favela is more than what they say, drugs and gangs, it’s more than that. They only sell this negative image of the favela,” says Thiago Firmino, founder of Favela Santa Marta Tour. “Tourists need to know this. We need to pass this message along.”

Ultimately, the choice of whether or not to go on a favela tour is up to you. But for the four activists below (representing just a few among 1000+ Rio favelas and the scores of talented guides that call them home), the answer is clear. Read up, get in touch, ask around, go on a tour, tell your friends.

Just stay away from the jeeps. 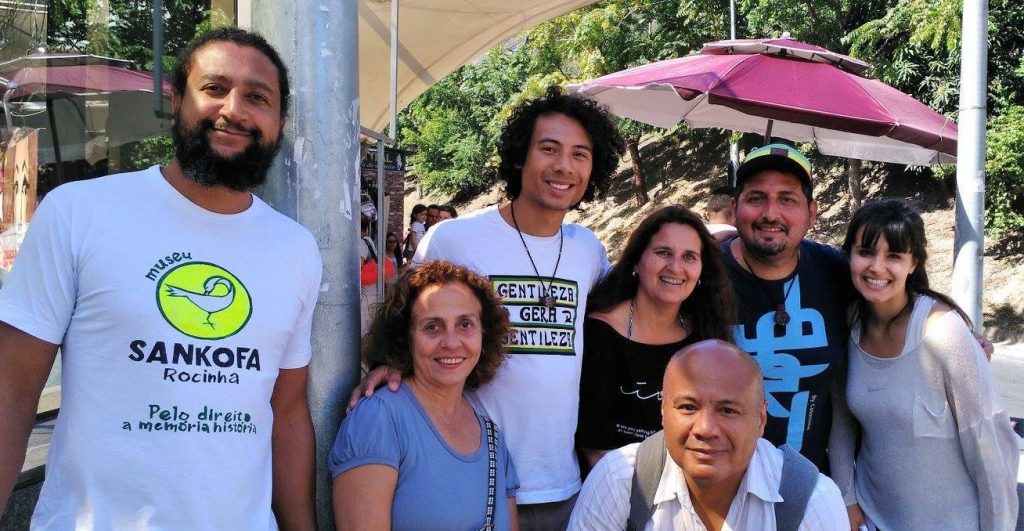 As part of a jointly run program between the Sankofa Museum and Rocinha Histórica, local historian Fernando Ermiro and colleagues lead 100% resident-led tours (guides and translators alike) with the goal of disputing harmful narratives around Rocinha, sharing the community’s long history, and supporting local development. Ermiro takes visitors to the top of Rocinha then down its winding alleyways, tracing the favela’s history all the way back to its original Tupi occupants.

Ermiro, who holds a degree from Rio’s Pontifical Catholic University (PUC-Rio), says resident-led tours are a must. “Giving priority to favela tours led by residents, born in the favela, should be obvious, but it still needs to be said,” he says. “And yet, it’s a controversial topic. We are talking about historic legitimacy, but contrary voices will answer back that it’s about competition and free markets.”

Conscious of this response, Ermiro and Sankofa Museum partner Antônio Carlos Firmino created Rocinha Histórica with the intent of making their work technically unassailable. “We are talking about entering the capitalist system and occupying the market with unquestionable quality,” he says. It’s not charity: “We are talking about generating jobs and income, liberating people, training them as translators, guides.”

For Ermiro, favela tours are inseparable from questions of social equity. He explains that outside agencies and guides operate out of a logic of exploitation, perpetuating dependency. Legitimate, community-led tours should “touch on certain points: the law is not a synonym for justice; income distribution; what moves the local economy; thinking globally and acting locally.” 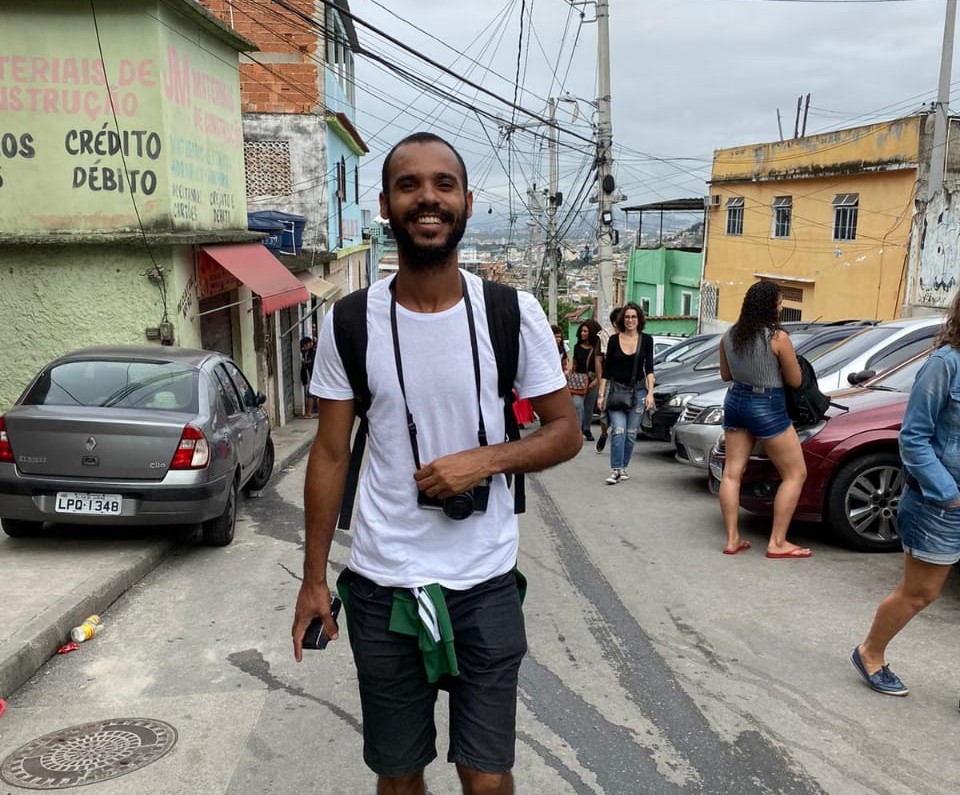 Photographer Felipe Paiva of Vidigal began his career in tourism working as a guide for the 2007 Panamerican Games. After repeatedly escorting visitors to familiar destinations like Christ the Redeemer, Sugarloaf Mountain, and Rio’s Botanical Gardens, Paiva began to wonder why other parts of the city were going ignored.

“It’s impossible to walk through Leblon and not notice Vidigal, or to walk through São Conrado and not notice Rocinha,” says the 34-year old. “Vidigal is part of the city just like Leblon or Ipanema or any other neighborhood in Rio.” Driven by that message, Paiva enrolled in a tourism certification course and began taking visitors to his native Vidigal.

Paiva’s tour immediately attracted researchers from local universities and think-tanks. By 2010, however, he had begun to draw more and more foreigners, and his visitors remarked they admired his presentation of Vidigal as a traditional neighborhood. “I don’t show Vidigal as an exotic place,” he says. “I’m not the sort of guide that will be like ‘hey let’s look at the poor little favela resident, let’s find some open-air sewage, let’s go look at someone holding a gun.’ That’s not my theme. That’s not my idea.”

Paiva says the knowledge exchange that takes place on his tours runs both ways. On the one hand, he says, foreign visitors are often amazed at the frantic flow of traffic up and down Vidigal, something that functions completely organically for residents. “If I remember correctly, the last accident we had was in 2010,” he adds. On the other hand, Paiva says that part of what he enjoys about his job is the outside perspective he receives from tourists. “They always bring me something new, some new issue,” says Paiva, explaining that he hadn’t realized Vidigal lacked public squares until a visitor pointed it out. “In the favela, the street is our leisure space.” 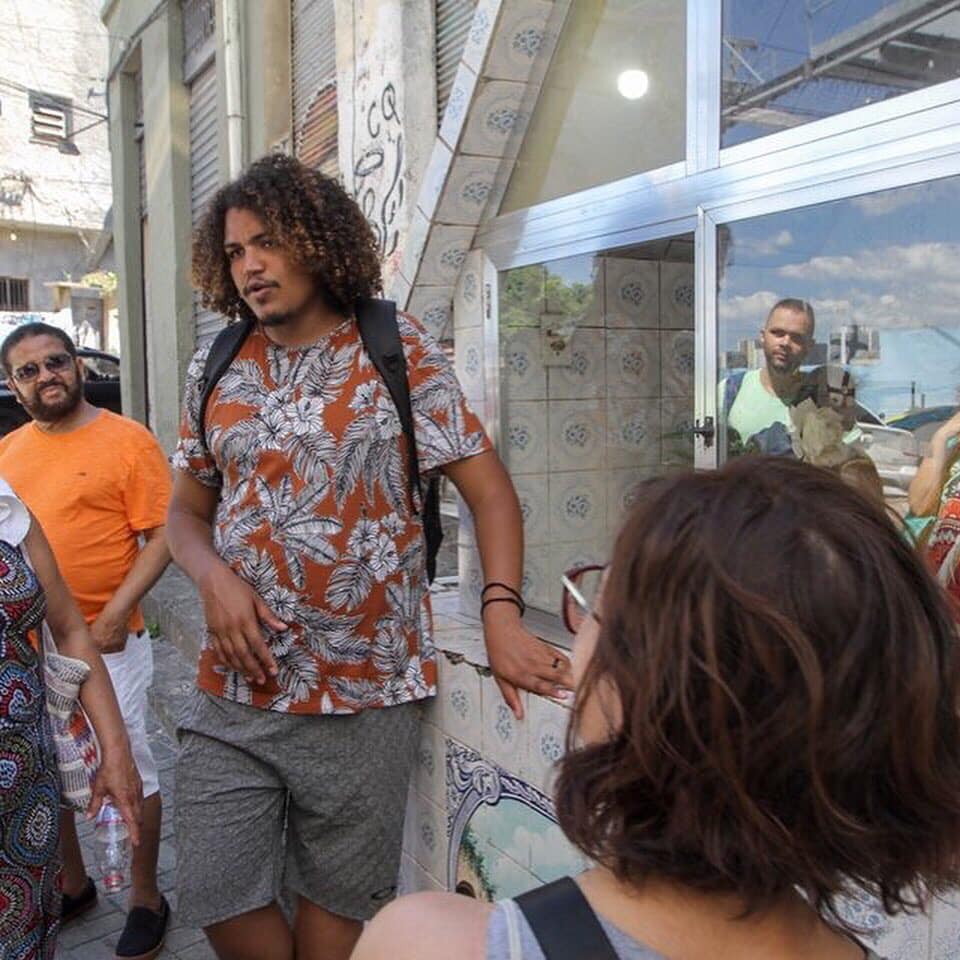 Providência’s Cosme Felippsen may have earned a degree in tourism in 2015, but he has been giving tours of his native favela since he was eight. When a foreign couple visiting for Providência’s centennial celebration (Providência is the country’s first community called “favela,” originally known as Favela Hill and founded in 1897 when soldiers returning from the Canudos War in the Northeast encamped along its hillside) asked the young Felippsen to walk them through the favela’s alleys, they paid him with a popsicle. “Now I get paid in money and beer,” he jokes. Since then, Felippsen, now 30, has led more than 7000 visitors through those same alleys.

Felippsen is no stranger to the controversy surrounding favela tours. “We see a lot of tours through the favelas that are super quick, run by guides and agencies from outside the favela, and are really stereotyping,” he says. “They’re unconcerned with discussing the concept of what a favela is.” Felippsen, on the other hand, caters his tours to addressing misconceptions around the favelas. “What I try to transmit to people is the reality of the favela, of what we live, and what the media doesn’t say, as they’re always painting the favela and its residents in a negative light.”

It was with this in mind that Felippsen teamed up with other favela activists to begin holding Rolé dos Favelados (Stroll of the Favelados). Open to favela residents and outsiders alike, the Rolé takes visitors to favelas throughout the city, counting on local hosts to guide them through their home neighborhoods. His aim remains the same: “What motivates me nowadays is bringing people, changing their mindsets, deconstructing their thoughts, breaking down their prejudices,” says Felippsen. “The goal is to interact and walk through the favelas, talking, with a resident from the favela and a resident from another favela, talking about what the favela really is.” 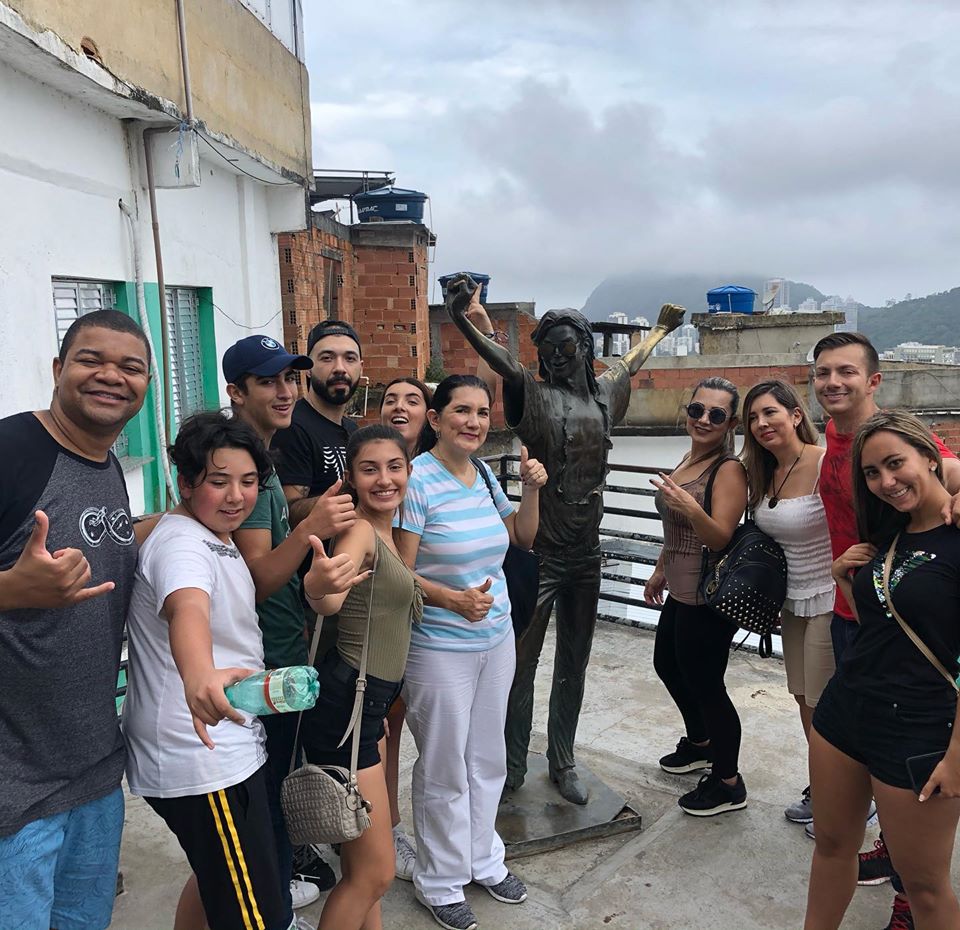 “It’s more than just gangs, criminals, war, drugs. You get me? I’m living proof of this,” says Santa Marta’s Thiago Firmino. When the DJ, event producer, and dance teacher began giving tours of his neighborhood in 2007, it was only a side gig. Now, Firmino has turned into a sort of cultural ambassador, taking everyone from Jared Leto to Carmelo Anthony on tours of Santa Marta. He was even tapped to carry the torch for the 2016 Olympic Games. “It really took off,” he says.

Amidst his contagious laughter, Firmino takes his job seriously. “What motivates me is, every day, being able to talk a bit about my favela and about my life,” says Firmino. “It’s really motivating being able to tell the truth.” For his tours, that means showing off the favela’s talent (“we’ve had people travel the world to give seminars, play music”) and demonstrating the favela’s culture of solidarity (“Everyone helps one another. If I’m out of rice, I go and borrow some from my neighbor and pay her back tomorrow… I try to pass on a bit of that spirit”).

For Firmino, this is all part of breaking down preconceived notions of violence. “We change mindsets. It’s really an educational job. It’s an outdoor class,” he says. His visitors leave transformed, gaining a perspective impossible to achieve through the consumption of international media alone. “Tourists become amazed at all the good things that we have here, and get angry that this news isn’t better transmitted to the outside.”

Firmino hopes that the tourists that participate in his tour will take his positive vision home with them, spreading the truth about favelas. “Every tourist, when we finish here, has a mission to propagate this message,” he says.

For other recommended activist-guides or favelas in less-visited parts of the city, click here for possibilities or reach out for recommendations to tour@catcomm.org and we’ll do our best to respond.