For the original article in Portuguese by Juliana Gonçalves published by The Intercept Brasil click here.

Necropolitics doesn’t just happen when Governor Wilson Witzel says to shoot people in their little heads. It’s also coming out of Rio de Janeiro faucets in the form of discolored water with an odd taste and smell—far from being odorless, flavorless, or colorless like we learned in school. The water crisis is one more phase in the politics of death—and Rio is its grand laboratory. It’s easier to see necropolitics in action when we think of snipers shooting haphazardly into favelas, but the management of death also occurs when the State hollows out a service meant to guarantee a universal right: access to water.

The concept of necropolitics, coined by Cameroonian philosopher Achille Mbembe in 2006, is based on the premise that the State can decide who will live and who will die. This theory explains Brazil since the colonial period, when people were enslaved and tortured to satisfy others because of their race, and remains applicable to the present day. Necropolitics happens, for example, when the State defines which region does or does not receive a specific public policy—which ends up determining who has a greater chance of dying. This choice also creates a near-death condition, leaving people inert, so that they don’t have the strength to rebel against unacceptable conditions—answering the question of why cariocas haven’t taken to the streets after weeks of dirty water flowing from the tap.

The problems with water in this state, like with necropolitics of the government, aren’t new. Pollution via domestic and industrial sewage in the Guandu Basin, where our water comes from, is old news, as is the debate over the privatization of CEDAE, the Rio de Janeiro State Water and Sewerage Utility. As such, The Intercept Brasil has already written about how the sale of the state agency jeopardizes access to water as a human right.

But it was under the government of Wilson Witzel that a good part of CEDAE’s technical body was fired, deepening their scrapping of the [water] system. It is Witzel who blackmails the population, saying that depollution can only happen through privatization, creating an emergency situation, compelling the sale of the company. Governing by using the management of death to achieve one’s own interests is also necropolitics (it’s worth remembering that this isn’t exclusive to Wilson Witzel).

While the governor thinks about the amount of money that will come in with CEDAE’s auction, borderline diarrhea has become normalized among cariocas. Despite authorities guaranteeing the water is drinkable, hospital emergency rooms are crowded with people with nausea and diarrhea, aggravating an already bankrupt health system. Those that have the money rush to buy mineral water: residents of the South Zone cleaned out supermarket shelves and secured their cases of bottled water, while residents of lower-income areas of the city—who, by the way, were hit first—are left to boil their water, or worse, choose between drinking mineral water and eating.

The State can have several different policies about death. But there is one common factor: they always hit the impoverished first. The first to die are those who don’t have the money to pay hospital fees; those who don’t have basic sanitation and are exposed to unhealthy conditions; or those who must choose between mineral water and food.

Necropower is uninterested in health, education, income generation, or well-being—all directly impacted by access to water and basic sanitation. Necropower, in this case, acts through environmental racism, determining who will have treated sewage and running water and who will be exposed to toxic waste or the direct effects of industrial pollution. And it’s for this reason that Belford Roxo (4.52%), Nova Iguaçu (0.15%), and São João de Meriti (0%), three cities in the Baixada Fluminense, rank in the 10 worst municipalities for sewage treatment in Brazil, but not [Rio de Janeiro’s touristic neighborhoods] Copacabana, Ipanema, or Leblon. We talk about racism because zip codes have color.

The study above, “O Saneamento e a Vida da Mulher Brasileira“ (“Sanitation and the Life of the Brazilian Woman”), from Trata Brasil, responsible for the ranking, also reveals that women are the ones most affected by precarious access to water and sanitation. Especially black women. Directly affected as a result of the misogynist structure that relegates them to housekeeping, it’s women who have the most contact with contaminated water and with people who get sick because of the sanitation infrastructure. This is, again, environmental racism.

Cities in [Greater Rio’s] Baixada Fluminense have been living through a water crisis for years. Some places don’t even have access to dirty water. The well of my dreams in childhood was always an artesian one. Whoever had a well on the street managed to provide a few buckets for bathing and cooking in the summer when there was no way that water was going to come out of the faucets. For drinking, the best option was always the 20-liter jug (already running out in the current crisis).

In the favelas, the scene isn’t much different—but a little worse. The improvised water pipes are mixed, and no one knows which pipes are for water and which are for sewage. Complexo da Maré, for example, is not attended to by nearby ETE Alegria, one of the biggest water treatment stations in Latin America, because of an impasse with the government. Moreover, Maré doesn’t receive any of the items prescribed by the National Basic Sanitation Law. In another community in the North Zone, Manguinhos, the residents’ waste is dumped in the same rivers where children swim—an image that repeats itself in other low-income areas in the city. 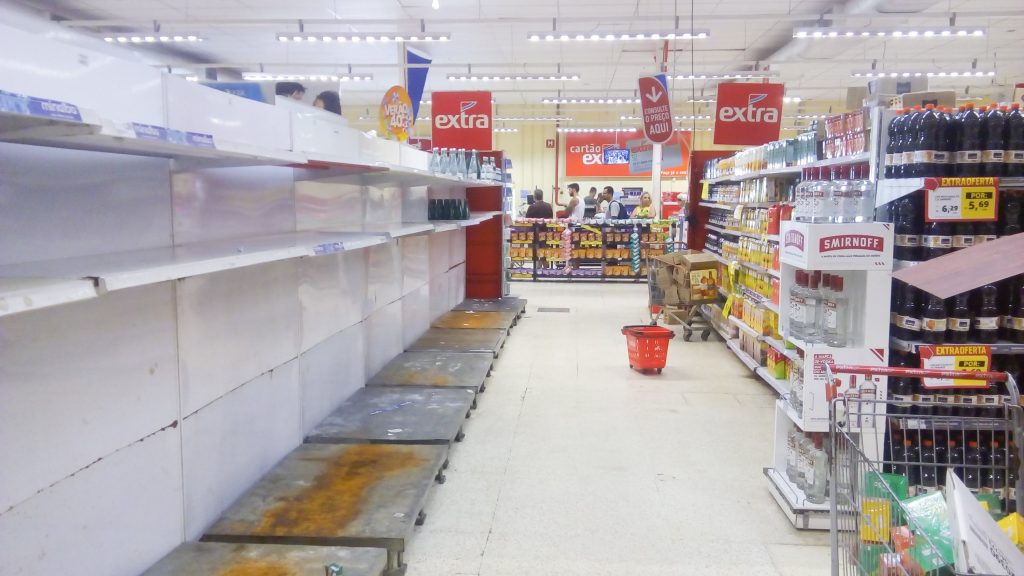 The neglect of sanitation is directly related to the water crisis. The system is polluted by the sewer. The governor of Rio and CEDAE say that the water is altered because of a substance called geosmin, produced by algae. Theoretically, geosmin shouldn’t cause health problems. But authorities can’t explain why people get sick after drinking the water. As the chaos continues, no one can predict when the water supply will return to normal.

This Carioca Mad Max was built over years of necropolitics, choosing who does and who doesn’t receive public policies and rights. We are puppets of a State whose objective is to exterminate dark-skinned and impoverished people—the rich are also affected, but they drink mineral water. The government of Rio de Janeiro works for the destruction of the people. Be it by bullet or by thirst. Take care of yourself!