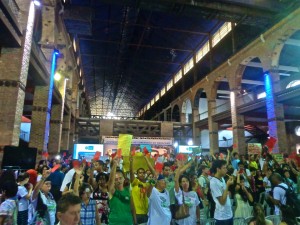 More than 500 angry citizens, including schoolchildren, parents and indigenous people, protested against the privatization of the Maracanã stadium and demolition of a public school, aquatic center, sports center and old Museu do Índio (Indigenous Museum) for works in preparation for the World Cup 2014 at the Public Consultation Meeting on Thursday, November 8th. Representatives from the Public Prosecutor’s Office, City Council and the Popular Committee for the World Cup and Olympics were in attendance.

A deafening combination of shouts, chants, whistles and megaphone sirens all but drowned out the project presentation by Rio State Home Secretary, Regis Fichtner, who opened by insisting that the developments are a result of Fifa’s requirements for the tournament. The people’s revolt continued throughout the meeting with paper, biscuits and even feces thrown at the state government panel, leading to shock battalion military police officers being brought in to shield the politicians. As with the TransOlímpica meeting, those wanted to voice concerns had to register beforehand.

A source of national pride, the Maracanã stadium stirs strong emotion amongst the Rio population. The popular demonstration was organized under the banner “The Maraca [local nickname for the stadium] is ours!” and several who spoke at the meeting denounced the privatization of the famous stadium. One engineer said “It’s an insult to our national heritage. The Maracanã belongs to Brazil”; another citizen exclaimed “The Maracana is a public good…let us vote on it and you’ll see that the people are against privatization”. 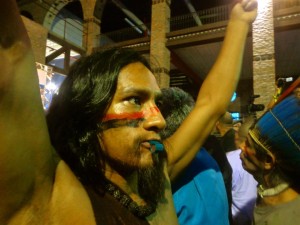 The planned demolition of the Friedenreich Muncipal School, ranked fourth best public school in the state, to make way for a court has roused significant criticism from civil society groups, including political mobilization group Meu Rio whose petition to save the school has over 15,000 signatures. Students and parents protested at Thursday’s meeting, with comments of disbelief made on the microphone: “The World Cup will be here for a month and you’re going to demolish a school?”. The Julio Delamare Aquatic Center and Celso de Barros Athletics Stadium used by schools and the surrounding communities are also slated for demolition.

Brazil’s first official recognition of indigenous culture and current home to a village of indigenous people from all over Brazil since 2006, the former Museu do Índio situated next to the stadium is also to be cleared. What is currently a lively urban village called Aldeia Maracanã with educational cultural events among the remains of Brazil’s first indigenous museum is to become a parking lot. Carlos Tukano, an indian from Amazonas who has lived in Rio for more than 15 years, said “We are not going to negociate demolition. The World Cup won’t finish with us. We’ve been here for more than 500 years.. We’ve been under pressure for years. We’re not going to leave. We’re going to create a lot of noise and the government is going to be viewed very badly”.

The question of democracy, or lack thereof, was raised repeatedly with protesters calling for the cancellation of the meeting due to the lack of public consultation as to whether the Maracanã be privatized. One speaker called the meeting “an affront to democracy”. The panel ignored the requests. The palpable frustration among the crowd and general sentiment that the meeting wasn’t a valid democratic exercise led the majority to abandon en masse halfway through. 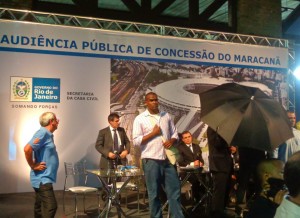 A handful stayed including one citizen who highlighted the Public Meeting’s role in explaining government projects: “There’s a problem with transparency. We need explanations for everything to do with the Maracana. We need more meetings. It’s been two and half hours without any explanations, which invalidates what’s going to happen. Civil society deserves respect not just during the elections. We want to know”.

Secretary Regis Fichtner responded briefly to the comments, dismissing the protest of a “minority” as “anti-democratic”. He expressed the State’s pride over the Friedenreich school and assertions that the new one would be better. He denied the existence of the Aldeia Maracanã indigenous village, dismissing claims that it is anything other than “ruins with a tree growing out of the wall”. He then emphasized how the work would ensure a future for Maracanã, that the flags would remain and there would be a fixed ticket price.

Aurea Xavier, mother of a student at the Freidenreich Muncipal School then took to the microphone with an impassioned speech that well articulates the general mood amongst those present:

“You spoke about the democratic issue. Leglislation dictates that there has to be public consultation, there has to be a public meeting and who represents the people at a public meeting are those that attend. None of the citizens here expressed themselves to be in favor of the public-private initiative you’re doing. The people expressed a demand for the cancellation of the meeting and that the people be consulted. This meeting is invalid. We’re not going to stay here because we can see that it’s a farse… The petition we handed you is signed by 15,000 people. I think the petition, the people’s demonstration, isn’t a minority group. We filled this place and said no to the concessionary and this public private partnership. I’m leaving and I invite everyone else to come with me because it’s you [Secretary] that will decided for yourself and we will go through the legal channels to demand a proper Public Meeting.”

The Secretary has ten days from the meeting to publish the final project for the concessionary. He has reaffirmed that he intends to maintain everything as it is.

The former Múseu do Índio is already under great threat as this Tuesday Federal judge Maria Helena Cisne revoked two preliminary injunctions stopping the demolition of the building and clearance of the urban indigenous village and cultural center. There are reports that a wall has already been demolished and that the community of Indians is currently living in a climate of intimidation. Following the judge’s decision, Carlos Tukano recorded this statement, saying “They’re tearing up the law to deny our rights.”

With mounting pressure, the popular discontent expressed at the Public Meeting and on social networks has led 33 state deputies to submit a request for a referendum over whether a private enterprise have concession for running the Maracanã Complex. In a release announcing the request, the Popular Committee for the World Cup & Olympics says “The rapid manifestation of solidarity by a large number of politicians from different parties and political positions to the referendum proposal shows the strength and scale of the movement calling for a democratic process in the renovation and management of the Maracanã.”