The 18th Annual Museum Week, an important event for Brazilian museums organized by the Brazilian Institute of Museums (Ibram), a group of museological institutions, took place May 18-24, bringing museums and related organizations together with activities open to the public. This year’s Museum Week had the theme of “Museums for Equality, Diversity, and Inclusion.” Though all physical events were canceled, activities were made available in an online program.

The week typically features strong participation from Rio’s community museums. These community museums practice social museology: they are often territorial museums, meaning their territories are part of the museum which is built by the actions of residents. As part of their social function of developing historical counternarratives, community museums focus on preserving the right to memory and to popular resistance.

However, in 2020, faced with the Covid-19 pandemic, community museums and memory-preservation projects in Rio favelas and quilombos have, along with countless other favela-based organizations, changed their focus to fighting the pandemic in their communities.

Museums and Memory-Preservation Projects to Fight the Pandemic

Community museums are living museums and they have found themselves at the forefront of the fight against Covid-19, taking action in their territories and on social media. These museums are used to preserving memories, but now, more than ever, museum teams and other institutions are making history through direct organizing.

“This has been happening in all locations where community museums are based. They are taking part in existing campaigns, or sometimes the museums themselves are promoting [anti-Covid-19] campaigns, because the authorities’ attempts to mitigate the consequences of the pandemic are very poor in comparison to what they should be doing in favelas. Their efforts are negligible. So organizations, collectives, and community museums have taken the lead,” explains Claudia Rose Ribeiro Da Silva, coordinator of the Maré Museum.

Since the beginning of the quarantine, the Maré Museum, located in the favelas of Complexo da Maré, in the city’s North Zone, and managed by the Center for Studies and Solidarity Actions of Maré (CEASM), has been closed to visitors. But the museum has been supporting the Covid-19 Maré Mobilization Front with 60 volunteers. The museum’s space has served as a support point, and has become a part of the campaign to reduce the damage of the pandemic. The federal government’s public health institute, the Oswaldo Cruz Foundation (Fiocruz), donated 2,200 food parcels and hygiene kits to the Maré Museum, which then passed them on to the Maré Mobilization Front.

The Maré Museum had many physical activities planned for Museum Week, but all have been postponed. At the moment, “our participation, especially this week, is to help strengthen the Maré Mobilization Front’s campaign. This is important not just because it shows how a community museum works, but also how all museums need to fulfill their social role and take part in this fight against the pandemic,” Silva explains.

The Camorim Quilombo, the archeological site of an original rural quilombo (a historic community descended from fugitive slaves) that has become an urban quilombo today, is located in Jacarepaguá, a neighborhood in Rio’s West Zone. Adilson Batista Almeida from the Camorim Quilombo Cultural Association (ACUQCA) explains that all of the organization’s activities with schools and universities were suspended even before the municipal decree imposing the closure of museums, theaters, and cinemas to contain the pandemic. “We were planning a large event in April and we saw that we were not going to be able to do it. So now we’ve joined the frontline in terms of social aid, helping with food parcels for the community and providing information about how to prevent the spread of Covid-19,” he emphasizes. There have been three Covid-19 deaths in the community so far. 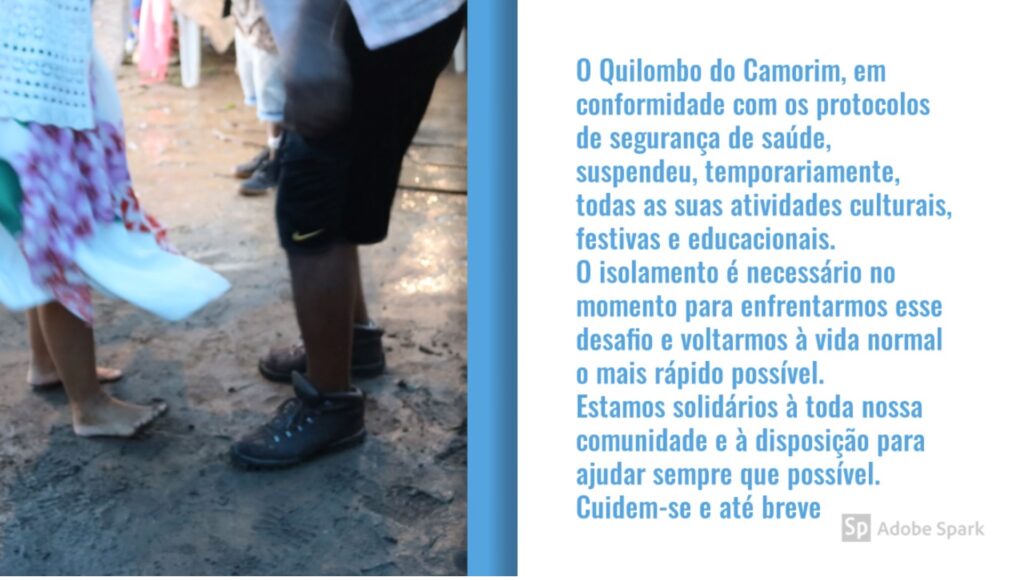 “The State is not giving us any support: it wasn’t supporting us before, and now it’s only gotten worse,” says Almeida. Almeida, the president and director of the ACUQCA, said that in 2019 the community archeological site received visits from 15,000 students from public schools in the region.

In Brazil’s most historic and first favela, Morro da Providência in Rio’s downtown Centro area, Rolé dos Favelados (Stroll of the Favelados), which gives tour-goers a critical vision of the history of resistance in the first favela, has now turned its attention towards the SOS Providência campaign. SOS Providência is supporting the community in the fight against Covid-19, together with a range of residents, social movements, and other institutions from the region. 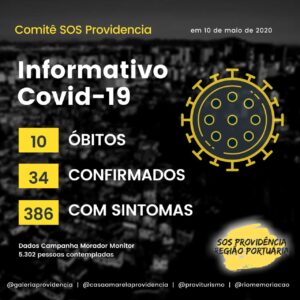 As well as distributing food parcels and hygiene products to residents, the SOS Providência Collective, formed by local projects and activists from Providência and Rio’s Port Region, is organizing the Morador Monitor (Resident Monitor) project. The project, supported by 12 volunteers (protected with PPE), managed to map 90% of Providência and the Port Region in its first campaign from May 4-9. As of May 10, the project has detected 10 deaths, 34 confirmed cases of Covid-19, and 368 suspected cases.

The aim of this census project, as well as informing people and alerting residents to the underreporting of cases in the community, is to collect information about which families need food parcels, hygiene kits, psychological support, and support in accessing the government’s emergency basic income payment, among other needs. The collective has two online fundraising campaigns open in order to maintain and expand its community aid work. The crowdfunding campaigns, in addition to contributing to the purchase of food parcels and hygiene kits, also help remunerate favela monitors, who receive R$500 (US$90) for every week of work, helping to provide a source of income during the pandemic.

Casa do Jongo da Serrinha (Serrinha’s House of Jongo), in Madureira, in Rio’s North Zone, provides dance, music, and popular culture classes for local children in the community known globally for being a key source of Rio’s cultural heritage. The house provides a living space to preserve the memory and practice of jongo and samba in the Serrinha favela and is now also focused on supporting the community during the pandemic.

Due to the physical isolation rules during the pandemic, a large proportion of Serrinha residents who make a living in the informal economy are unemployed. Companhia de Aruanda, a local artistic and cultural collective, launched the Avante Serrinha (Forward Serrinha) campaign. The residents’ association has started to receive donations of food, water, and financial support. Those looking to help can email Flávio da Silva França Alves at mestreflavinho[at]gmail.com.

The Evictions Museum, located in Vila Autódromo, in the West Zone, is an activist museum that preserves the memories of the evictions that took place in the favela in the run-up to the 2016 Olympic Games, as well as those in other communities. The museum celebrated its fourth anniversary in the middle of the pandemic. Residents were thus unable to gather to celebrate, but the community museum did not let the date go unnoticed. The museum shared the following message in a Facebook post: “We want to thank everyone who is fighting evictions. This battle is taking place every day. And during this difficult period, we want to reinforce the importance of social distancing in order to fight Covid-19. Stay at home if you can, since, in this situation, staying at home is an act of care for yourself and for others ❤.” 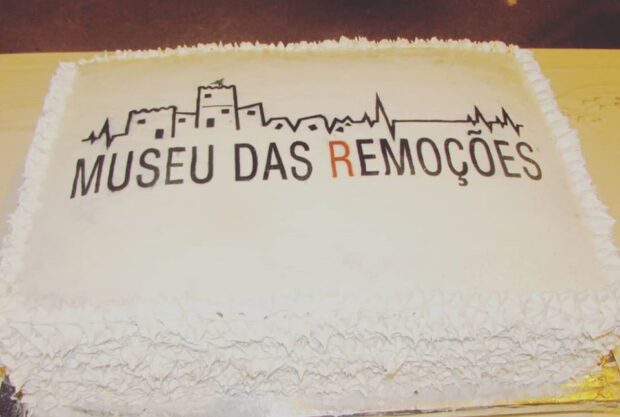 During the pandemic the Evictions Museum held an online class on May 14, hosted by professor Diana Bogado, about contemporary urban planning linked to the politics of evictions taking place in favelas and peripheral communities in big cities.

Bianca Wild, coordinator of the Sepetiba Ecomuseum, in the far corner of Rio’s West Zone, explains that the ecomuseum is currently focusing on raising awareness in the community about how to take precautions to prevent the spread of coronavirus. Some of the ecomuseum’s team members are living with people who are at particular risk of Covid-19. “We can’t go out into the field, so we are looking for an alternative: weekly live transmissions with themes that we consider to be important.” 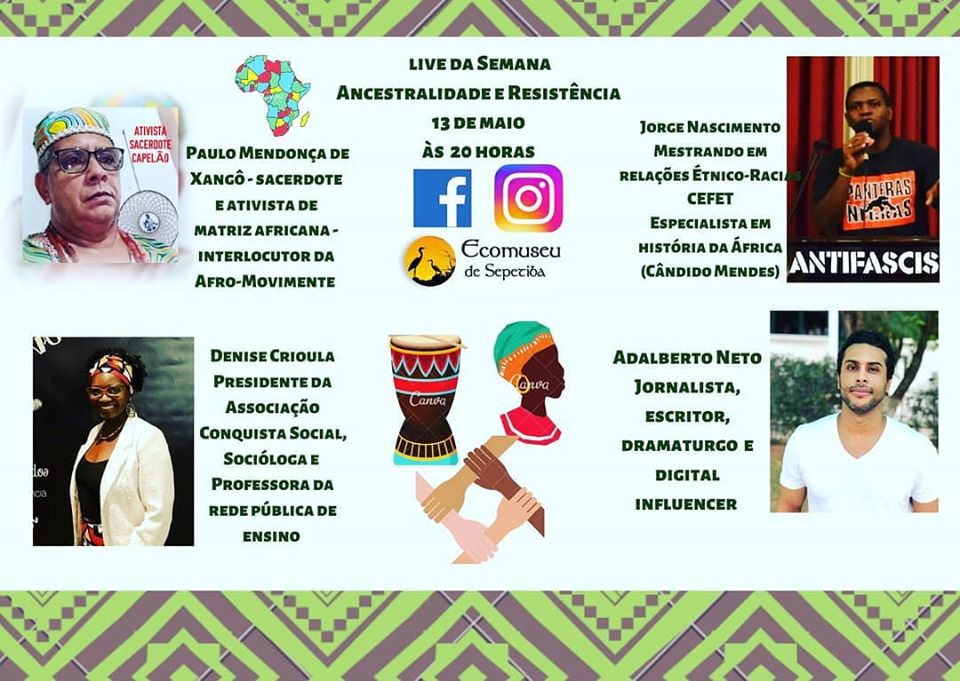 On May 20, the Sepetiba Ecomuseum celebrated National Museum Week with a Facebook live event.

The ‘Bumba Meu Boi em Movimento’ Museum (a folklore celebration from the Northeast of Brazil), created by the organization Raízes do Gericinó, is located in Vila Catiri, a community in Bangu, in Rio’s West Zone. The museum possesses “an archive of material from the northeastern state of Maranhão, and the vernacular knowledge incarnated in a traditional family from Maranhão’s semi-arid sertão region, principally from Dona Rosa, former ‘coconut breaker’ who has a wealth of knowledge of dance and religious traditions instilled in her from the folklore.”

On International Museum Day, May 18, TV247 organized a debate to highlight the importance of the role of community museums amid the pandemic, with the participation of a number of community museums. Auricelia Mercês from the Bumba Meu Boi Museum said that the main challenge during the pandemic was not organizing to fight coronavirus, but the lack of hugs: “Here in this museum, we treat the question of friendship as something very important for the territory.”

According to Mercês, this is not the first time that the community has dealt with hunger. Hunger has always existed, but now it’s increased. Between March and May, the museum attended to 2,000 people from the community. “Our museum is a grassroots one… In the absence of public authorities, we are here. We won’t give up. We’ve lost friends, people are isolated, but we are not going to stop fighting. This is the message I want to give.”