On the morning of Friday, June 19, thousands of workers and protesters shut down the Port of Oakland, California, to fight for the end of systemic racism and police brutality in solidarity with the African-American community. The demonstration was organized by the International Longshore and Warehouse Union (ILWU), one of the most active unions in United States history, with a membership of over 42,000 workers in the U.S. and Canada. 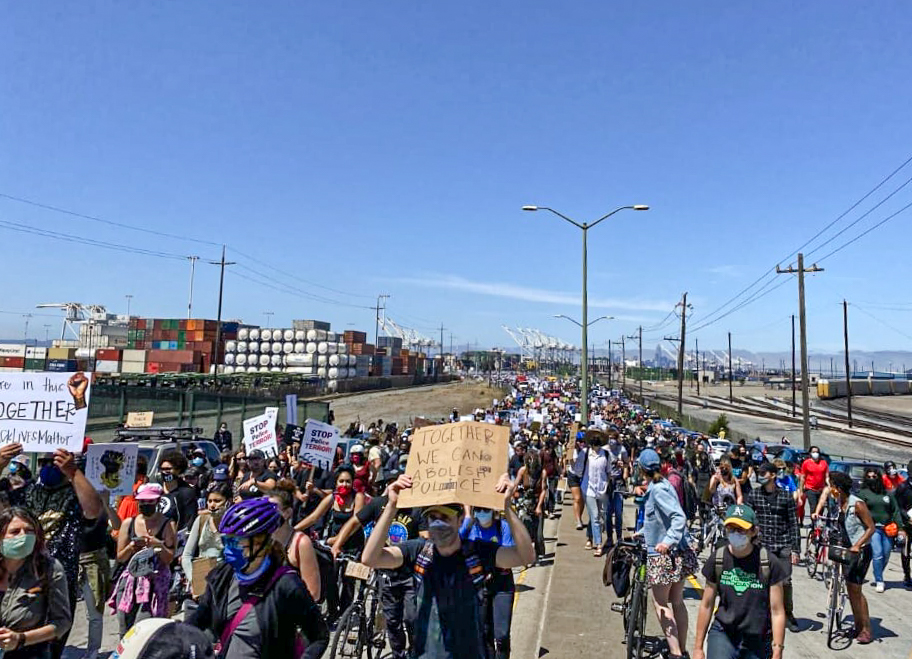 The stoppage of all port activities along the West Coast of the U.S. and Canada coincided with Juneteenth, the celebration of the 155th anniversary of the date on which the Emancipation Proclamation reached the last group of enslaved people in Texas, two years after the document’s signing. This year, the celebration gained greater attention due to the wave of protests following the police killing of 46-year-old George Floyd, in Minneapolis, and the March 13 killing of paramedic Breonna Taylor, who died after three officers entered and opened fire in her Louisville, Kentucky apartment while she slept. The three officers are yet to be arrested.

Among the speakers at the protest was Angela Davis, the celebrated professor and former member of the Black Panther Party, an organization created in 1966 in Oakland. She mentioned the special date and added: “Thank you for shutting the ports on Juneteenth, the day we celebrate the end of slavery, the day we memorialize those who offered us hope for the future, the day when we renew our commitment to the struggle for freedom. You represent the potential and power of the labor movement. Hopefully, this action will influence other unions to stand up and say ‘no’ to racism, and ‘yes’ to abolishing policing as we know it, re-imagining the meaning of public safety and security.”

Willie Adams, the ILWU’s president and first African-American to hold the position, highlighted the international nature of the protest. Adams shared that dockworkers in Italy and South Africa had also joined the work stoppage in solidarity with their American counterparts. He also emphasized the importance of continuity regarding the protests. “What will you do when you leave?” asked Adams. “Because this struggle will continue. Because, if that young lady had not captured [George Floyd’s killing] on tape, those cops would have had another day at work, and this has been going on for a long time. The eyes of the world are on you today here in Oakland. It’s not what we say, it’s what we do.”

After the speeches, thousands of people walked from the Port of Oakland to the downtown area, covering two miles. The day was hot and sunny and the crowd was followed by a motorcade. Ahead were a sound truck and uniformed bikers. The groups crossed the bridge connecting the port and the city to the sounds of Bob Marley: “Get up, stand up: stand up for your rights! Get up, stand up: don’t give up the fight!” The crowds chanted: “No Justice, No Peace, Defund the Police!” and “Black Lives Matter!”, reciting the names of those killed by the police over the last several years.

A longtime protester, retiree Nickie Kirkland had traveled from Long Beach to support her union colleagues, “I just came out to support Black Lives Matter and the fight for social justice and against police brutality,” said Kirkland. She explained how the ILWU was founded in 1934 after two dockworkers were shot by the police while they attempted to create the union. One of the workers died. “We continue that fight because this is our fight. You’ve got to have justice, and it can’t be just for a few people. It has to be for all people, or no justice, no peace,” protested Kirkland. “That’s exactly what it means: if I don’t get justice, they don’t get peace. This fight is for black people, for women, for the LGBTQ community, everyone. Everyone needs to be treated with respect, everyone needs to be given a fair wage, everyone needs to have the opportunity to live their lives without the fear of violence.”

A 2018 study in the American Journal of Public Health found that black men are disproportionately affected by police killings and experience three times the risk of death of white men when interacting with law enforcement.“Race plays a powerful role in explanations of police-involved killings in the United States, and routine violence against people of color is a defining feature of U.S. criminal justice,” wrote the study’s authors.

That is one of the reasons why 50-year-old Rhonda Johnson joined the protest. “I have two African-American sons. They are 20 and 22 years old, they are compassionate and loving men, but the police perceive them as a threat. So I am here marching because of them, because every day that they leave my house I am afraid of what will happen outside from the time they leave until the time that they walk in my door at night,” she said. In Johnson’s opinion, “people are recognizing that racism is institutionalized and in the system. Everybody has to come together to fight back. It’s not only the police, but a lot of other institutions in America were also founded on white supremacy.”

Many young people also participated in the protest. Holding signs and chanting, they mingled with older workers and members of many unions that also showed up. Yesenia Rubio, a 24-year-old teacher, brought a sign saying “America is for Dreamers and Black Lives. Black liberation means freedom for all.” She reflected on the current events and talked about the issues also facing Latin America. “We are fighting back against all the police brutality that has occurred around the world, not only here in the U.S., but also in Latin America, where if your skin is darker, that is a reason for people to have prejudice, and have some kind of bias against you,” said Rubio. “This is important internationally because racism is not only a United States thing, it is a worldwide issue that needs to stop.” 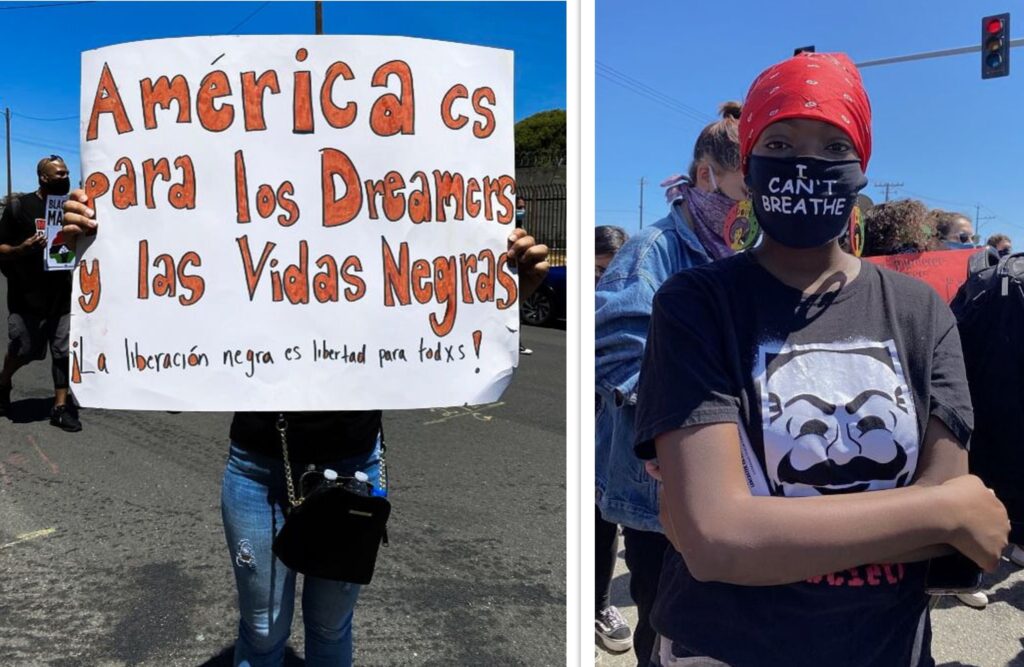 Before reaching Oakland’s central plaza, the group stopped by the Oakland Police Department headquarters for another round of speeches. Gerald Smith, a former member of the Black Panther Party in New York and a community organizer involved with the Black Lives Matter movement, was clear and direct in his message: “The Oakland Police consume 40% of the budget in this town, far more than they deserve. We have to work together on this. We will require a transformation in our entire society. This is not a one-week thing, this is not a one-month project. We have to stay with this. The prisons, the police departments, and the courts are the essential core of the capitalist State.” 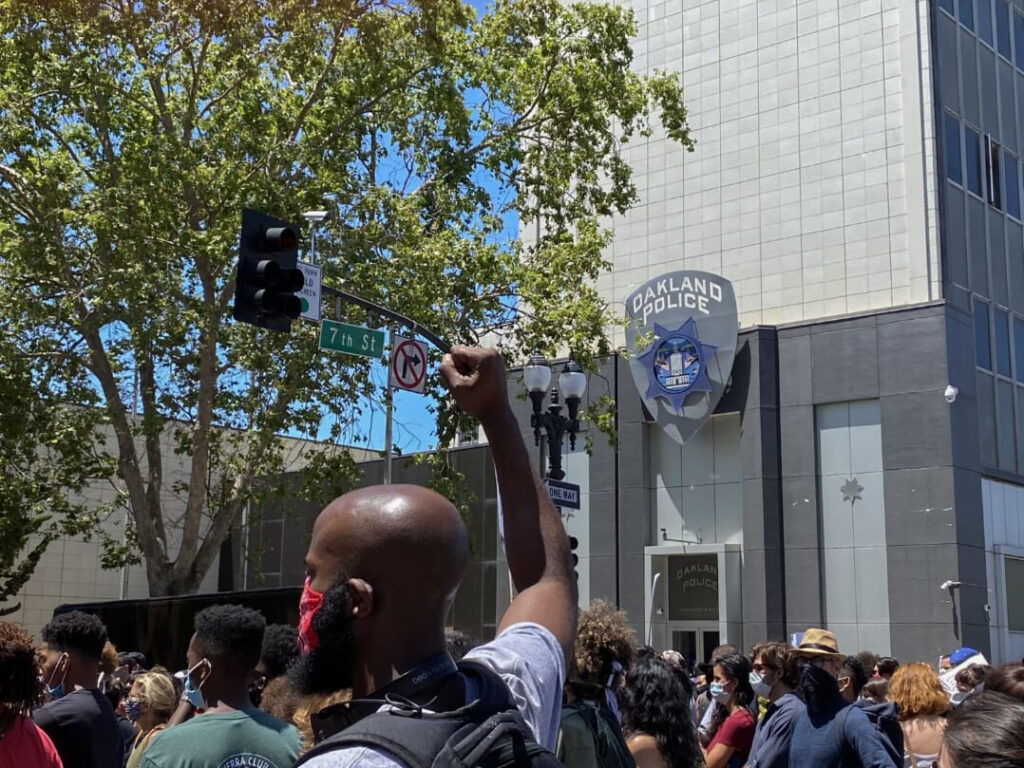 After walking a few more blocks, the group reached City Hall. The demonstrators were still energized and listened to a few more speakers. People of all ages and backgrounds shared a common belief of empowerment that went beyond the usual demands for reforms through electoral politics. The tone of the speeches and the voices on the streets demanded structural change and the abolition of the police, prisons, and end of an economic system that left many Americans behind. According to economists at the Federal Reserve Bank of Minneapolis, over the last 70 years, there has been little progress for blacks in the United States in terms of decreasing income inequality and improving wealth distribution. When compared, the economic disparity between whites and blacks in the United States is the same in 2020 as it was in 1968, the year when the Civil Rights Act expanded constitutional guarantees to black Americans and other minorities in the wake of the assassination of Reverend Martin Luther King Jr.

Hours after the protest, Davis participated in an online discussion in which she received an award for her contributions to civil and human rights. She mentioned Brazil and criticized the militarization of the Brazilian police. “Police violence in Brazil happens on an even greater scale [compared to the U.S.]. 4,000 black people were killed last year by the police in Brazil,” said Davis. “We can find assistance for our own struggles by looking at the experiences of people in other countries and by offering our solidarity.” On this last topic, she concluded: “Every single human being, every woman, every man, every transgender person, every non-binary person on the planet deserves to have their human rights acknowledge and defended. No one can be excluded from this planetary human embrace. Not indigenous Brazilians, not Muslims in India, not Kurdish people in Rojava, certainly not Palestinians in Israeli-occupied Palestine.”