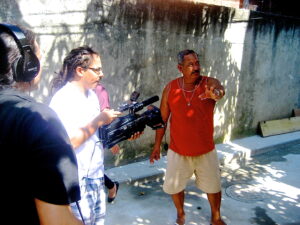 “Shhhhh, Bezerra,” cautioned the cameraman. “We’re in the middle of an interview.”

On November 23rd, the nonprofit Brazilian Institute of Social and Economic Analysis (iBase) sent an audio and film team into the Jacarepaguá favela of Asa Branca to interview citizens about how the community was founded and their specific memories of its development over time. After a morning oral history roundtable, the film crew from Raizes em Movimento, a Complexo do Alemão community-based organization, walked with Bezerra up and down streets, stopping various residents to ask about past political involvement and participation in mutirão or collective building projects. 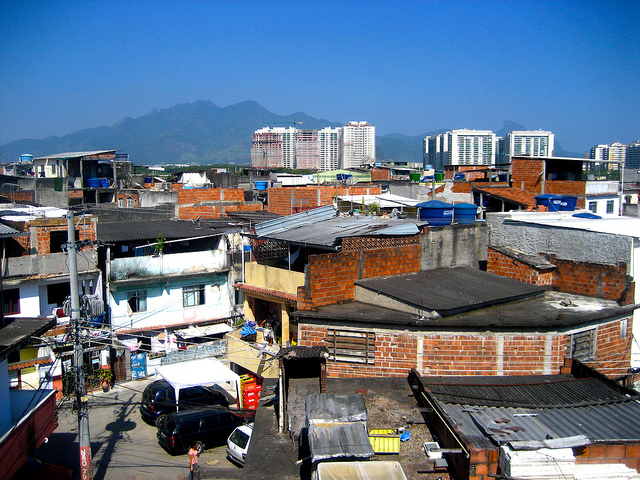 Longtime residents Eduardo Amil de Souza and Luiz Antonio told stories of daily life here, as did Rosilene Oliveira Silva, daughter of Catarina, the previous president of the Residents Association. Senhor Benedito, known as “Bene,” spoke about the beginning of the land occupation that became Asa Branca and the days when there was one bathroom in the community.

iBase has been contracted by City Hall to carry out the “participatory social diagnostic” on Asa Branca as part of the Morar Carioca municipal upgrading program, which includes community participation as part of its mission. This is one of a handful of official Morar Carioca events aiming to include the needs and desires of the community in plans for the upgrades. Although the City is currently paving some roads in Asa Branca, this is the the first time in the community’s 27-year history that an improvement is not coming from community members themselves. 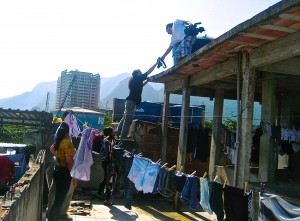 “Prepare yourself to be interviewed!” Bezerra would holler to a street at large whenever a new corner was turned, shaking hands and slapping backs as he went by. This unorthodox interview prep tactic gained chuckles from most streetgoers and tuts from a few more introverted older women, who rolled their eyes. The disapprovers still smiled. Spend a short time with Bezerra or read any history of Asa Branca and you will realize that his humor and energy have kept the community knit together. They have real concerns: out the back entrance of the community, 140 new condominiums bulge upward before the green peaks of the Tijuca massif. Asa Branca residents stream out to work there each day, and each month the edge of the condominuim construction site grows a little closer to the community.