This is an opinion piece about the ten year anniversary of the “pacification” of Complexo do Alemão, by a local resident.

On November 28, 2020, the “pacification” process of Complexo do Alemão had its ten year anniversary and a provocative question continues to nag at us: What exactly has changed in the lives of favela residents?

Over this period, a mix of uncertainties and doubts has been going through our minds as we imagined what it would be like to arrive at this day, ten years later. The fateful day on which everything happened and which is still very much fixed in our memories, we had no idea what had been planned. No information was passed on to those for whom it would be in their greatest interest, us residents.

The only thing we received was the “right” to stay at home in the middle of the crossfire, amid noise of troops invading everything on all sides of the favela. Helicopters were in the sky, battle tanks were going up the hill, and marines, snipers, and all the other security forces were present. For those, like me, who were here, it was as if we were inside those television images of the invasion of Iraq during the hunt for Saddam Hussein. The impact was so strong that many today are still suffering psychologically from the invasion. For us, pacification was nothing more than media hype.

I don’t really want to focus on the day of the invasion itself, I’d rather talk about the ten years that have passed since then. Yes, I have many things to say about those ten years! 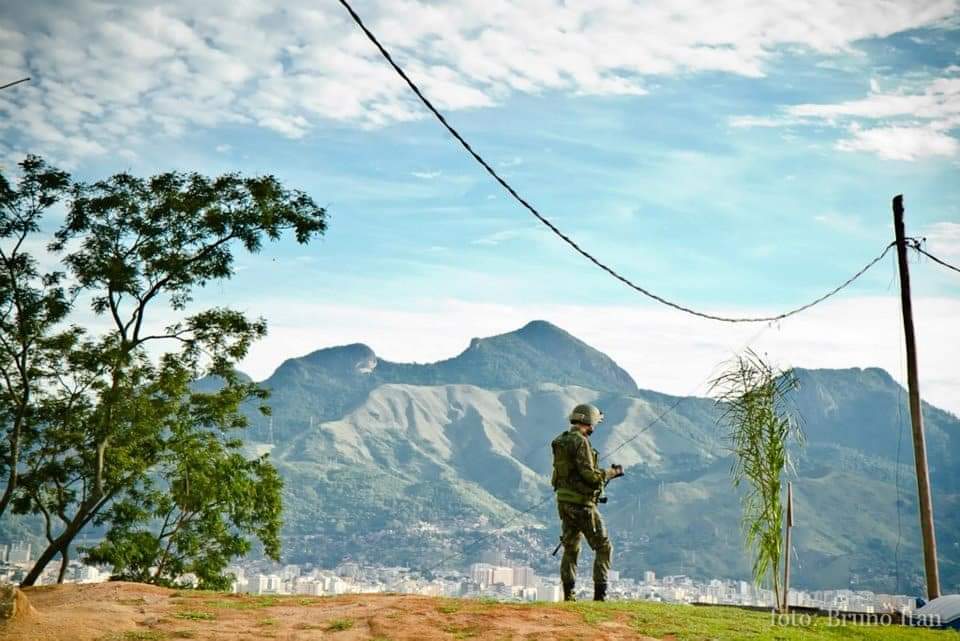 In an effort to impress, the mighty and powerful media broadcast live every step of the public security forces that day, and also heralded the various public and private services that came with them: COMLURB (waste management utility) CEDAE (water and sewerage utility), Light (electric company), TV antennas, telephone companies, services providing legal assistance, issuing documents, job registrations, among many other things… Needless to say, they were only there at the beginning. They all left years ago…

Do you remember Serra Pelada or even the promise of El Dorado? It was like that here. An invasion of various NGOs. People from various parts of the city came with the most “beautiful intentions” to help the “poor people of the favela.” Hundreds of pseudo-researchers lined up to study the behavior of favelados. Tourists came in droves! Going up the favelas’ hills and wanting to understand what it is like here, on an unrestrained, suspended safari looking to satisfy humans’ most innate and ardent curiosities: how can they live here like this?

Government officials in constant meetings made numerous promises of investment, collecting signatures upon signatures to validate their fundraising plans to help “the poorest of the poor in the favela.” Sometimes, there were five to six meetings on a single day to bring together the so-called local “leaders,” the spokespeople of the area, the patrons, the investors… and in these meetings the destination for these funds emerged. They were to be “designated” to be applied anywhere but here.

It was an exhausting time full of expectations; the candy had been placed on the meeting table, but it was then taken away… it wasn’t distributed, if you know what I mean. Many people passed through here… Many were co-opted by those who came through, playing the role of allies of the oppressor and pretending to be friends of the residents when, actually, they did not like us. 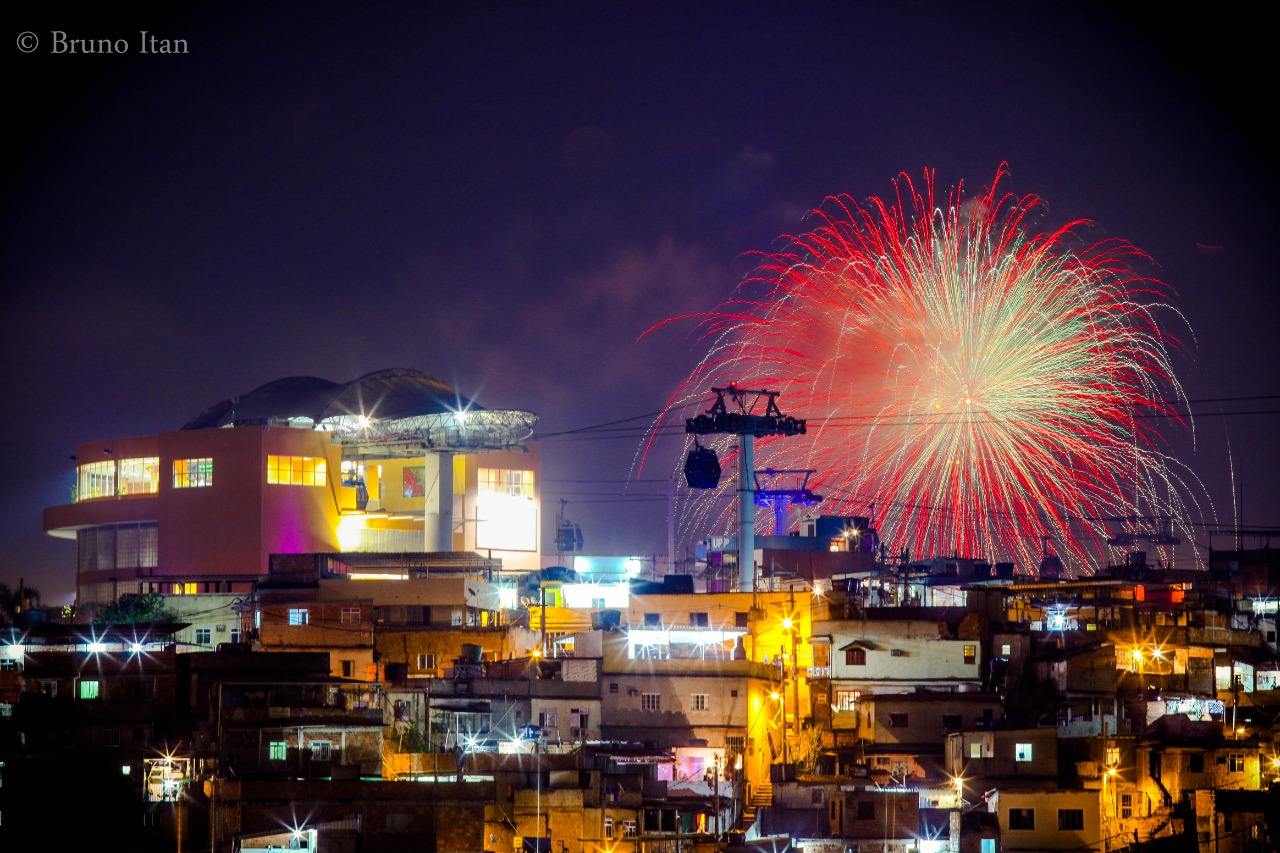 There was peace for a period of more than two years. Many “investors” decided to put some spare change here, in exchange for favors. Yes, there was a period of calm here. There were no shootings or harassment of residents. There were spaces for local culture and leisure for all of us. It was a good time. The favela believed that there would be investments in health, basic sanitation, education…

During this period, everyone started to believe that this process could be good for the residents. I witnessed it! I saw several local businesspeople looking to formalize themselves, seeking structural changes in their businesses, as there were promises of improvements to come and that many would benefit. But it was mere deception. We were deceived.

After the initial two years, things got serious. None of the things presented as “local transformation” had actually been done, with the exception of some electioneered works, keeping in mind that the municipal election was at that time. That was when we started to see a decline in everything. Everything was going downhill.

We started to see that the governing bodies behind the pacification process were starting to arrive more frequently, each time with more military forces. Meetings that were intended for problem solving were interrupted, and the dialogue ended there. As more military forces, more weapons, and more ammunition arrived, more money was destined for the construction of bases and war bunkers in the midst of our houses. And that was when the shootings started to return, albeit timidly, but they began…

The mounting presence of law enforcement here was frightening. I believe that they saw the favela not as having lives but numbers, numbers upon numbers, because their eyes shone… Shootings became more and more intense, causing the death of several residents who had no means to defend themselves and were always caught in the middle of the crossfire. There were many who never left our thoughts. Caio de Moraes, Antônio França, Dona Dalva, Eduardo de Jesus, Dona Beth… just to name a few.

The conflicts intensified each day. It seemed like a territorial dispute where one side attacked and the other defended itself and vice versa and we, the residents, were in the middle of it all. But worst of all was seeing the government—the main party responsible for all of this—there in the state governor’s mansion, Guanabara Palace, passive and apathetic to it all, simply watching and counting the deaths and grim television news pieces.

It was very clear to all of us that the Pacifying Police Units (UPPs) were created to provide protection and guarantees for the mega-events that Rio was hosting. The truce had taken place precisely during the World Cup. The shootings had stopped! There was a month in which we lived in total peace, but it was deceptive because the day after the World Cup ended, the war returned with full force and has dragged on to the present day.

Soon after that, the country was hit by a strong financial crisis and the federal and state governments were no longer spending much. As a result here, we witnessed (and are still witnessing) the downfall of the UPPs: scrapped cars and increasingly stressed out police officers, without the physical structure they need. Everything seemed to indicate that the end was near. When it all started, I had a company that took care of the maintenance of several new and well-equipped police vehicles. Now, the scene around me is the same as it was before pacification. I see policemen changing tires, pushing vehicles, and other things… It seems like the tap is dripping and it will soon dry up.

The current scenario is one of total failure, of absolute neglect, in all aspects. The most representative symbol of the pacification period, the cable car, is completely abandoned. Its promise of being a mode of transport linking the favela to other kinds of public transportation in the city has long been forgotten. The investors are gone, the miraculous NGOs have spent all their money, and nothing is left over. The golden hope is now out of sight and all of the government agencies we have left here are the armed police. Nothing else: everything else is gone.

We no longer hold on to the hope that one day we will be delivered what was promised: more decent public spaces for leisure, schools in the favela, cultural spaces, the promotion of local actors, and the empowerment of those who live here.

Amid the global pandemic, we are also plunged into the chaos of corruption, with influential politicians imprisoned… A tide of hopelessness has come over us, revealing that the light at the end of the tunnel has burnt out. The world, for a short while, wanted to see the favela from above, through movie screens and soap operas, but now they’ve pushed us aside yet again.

With the state bankrupt, uncertainty everywhere, and the crises we must face, we have had nothing to celebrate over these past ten years. It hurts the soul to see and live with everything we have witnessed here in Complexo do Alemão.

But the favela has always survived without “pacification.” We have lived here for years without that term and we will continue to live on without it. That model has failed. It’s about time to review it all! It’s about time for them to admit that they were wrong, and not just that: to apologize and to leave.

Cleber Araujo is a resident of Complexo do Alemão, where, through social media, he shows the favela in its most diverse forms and moments.