In an article for the journal Energy Research & Social Science—which was the subject of a RioOnWatch article—four researchers analyzed energy justice and classified its three basic elements: distributional justice, recognition justice, and procedural justice. This report, by a resident of the Rio das Pedras favela in Rio de Janeiro’s West Zone, addresses these three notions from the perspective of his community.

The “Gato” and Distributional Justice

Firstly, we must focus on the concept of distributional justice which, according to the article cited above, “concerns not only the siting of infrastructure, but access to energy services too.” That is, it outlines the two principle components of energy distribution—production and access—in an attempt to overcome the injustices in this process.

The question that serves as title of this piece seeks to encourage reflection about the motives and social role of clandestine electrical connections, in Brazil famously known as the “gato”—before criminalizing people who depend on this method in order to gain access to electricity, especially people in favelas and urban peripheries.

In this sense, it is worth remembering that the distribution of electricity in Rio de Janeiro’s favelas and peripheries was abandoned for many years by the city’s utility, Light, alleging risk of investing resources in favelas. The areas are considered informal settlements and therefore susceptible to eviction, which would jeopardize the investment. This argument purported by Light demonstrates the intertwined myriad difficulties faced in these regions due to the absence of public polices for housing, basic sanitation, electricity, and more.

During the 1940s and 1950s, Light informally “outsourced” energy distribution in favelas. This was achieved both via cabineiros—favela residents with access to energy who had permission to distribute and sell this access inside the favela—and through light commissions, which replaced the cabineiros in energy supply and took the form of a local energy distributor. It was only in the 1970s when Light took on this role itself. 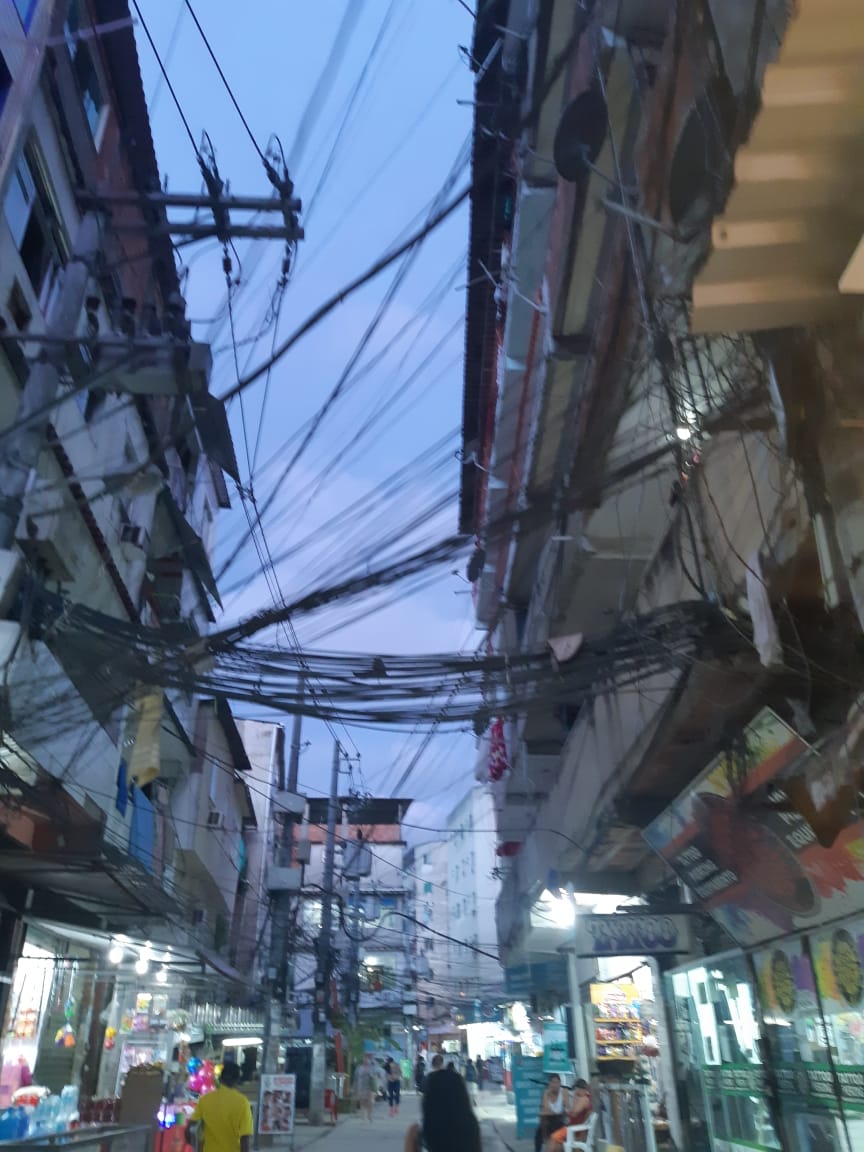 In the face of this historic abandonment, the cabineiros for the most part could not control the (re)distribution of energy connections. That is, given the universal need for energy, the utility’s lack of provisions, and the lack of monitoring and guarantee of the service by the State, the “gatos” emerged as a form of access to electrical energy in favelas.

Nevertheless, this is an exclusionary form of access, not only due to the criminalization of these people and territories, but also due to the risks that come with it. Rio das Pedras has experienced several fires caused by overwhelmed circuits or precarious and neglected installations.

Another important point when it comes to distributional justice is that of fees. Although we, residents of Rio das Pedras, pay public lighting taxes, it is often we who are changing the light bulbs, as Light does not carry out maintenance work in the favela with the same regularity as it does on the asfalto (formal city).

Considering that Rio das Pedras was originally occupied in the 1960s, it was only after 54 years of very precarious access to electricity, in 2014, in the midst of the mega-events being carried out in the country—the 2014 World Cup and the 2016 Olympics—that Light installed the necessary infrastructure for more effective energy distribution, through the project Light Legal.

According to a 2015 article in O Globo, “to combat the famous ‘gato,‘ Light already replaced almost 40km of electrical networks in Rio das Pedras, in Rio’s West Zone… In addition to changing the wiring, 415 transformers and 1710 utility poles were replaced, in an investment of over R$90 million (US$16.4 million). The prediction is that there will be not one entanglements of wires remaining by the end of the year.”

Understand that after half a century of abandonment, Light’s goal was not to guarantee the expansion and quality of access, that is, distributional justice, but instead to combat the method of survival identified by the favela population and to guarantee receipt of payment for supplying energy.

Understand that after half a century of abandonment, Light’s goal was not to guarantee the expansion and quality of access, that is, distributional justice, but instead to combat the method of survival identified by the favela population and to guarantee receipt of payment for supplying energy.

From this restructuring of the electric network in Rio das Pedras—which also occurred in other favelas around the city—electric meters with chips were installed to register and measure energy consumption, which somehow resulted in disproportionately high electric bills for residents of favelas. 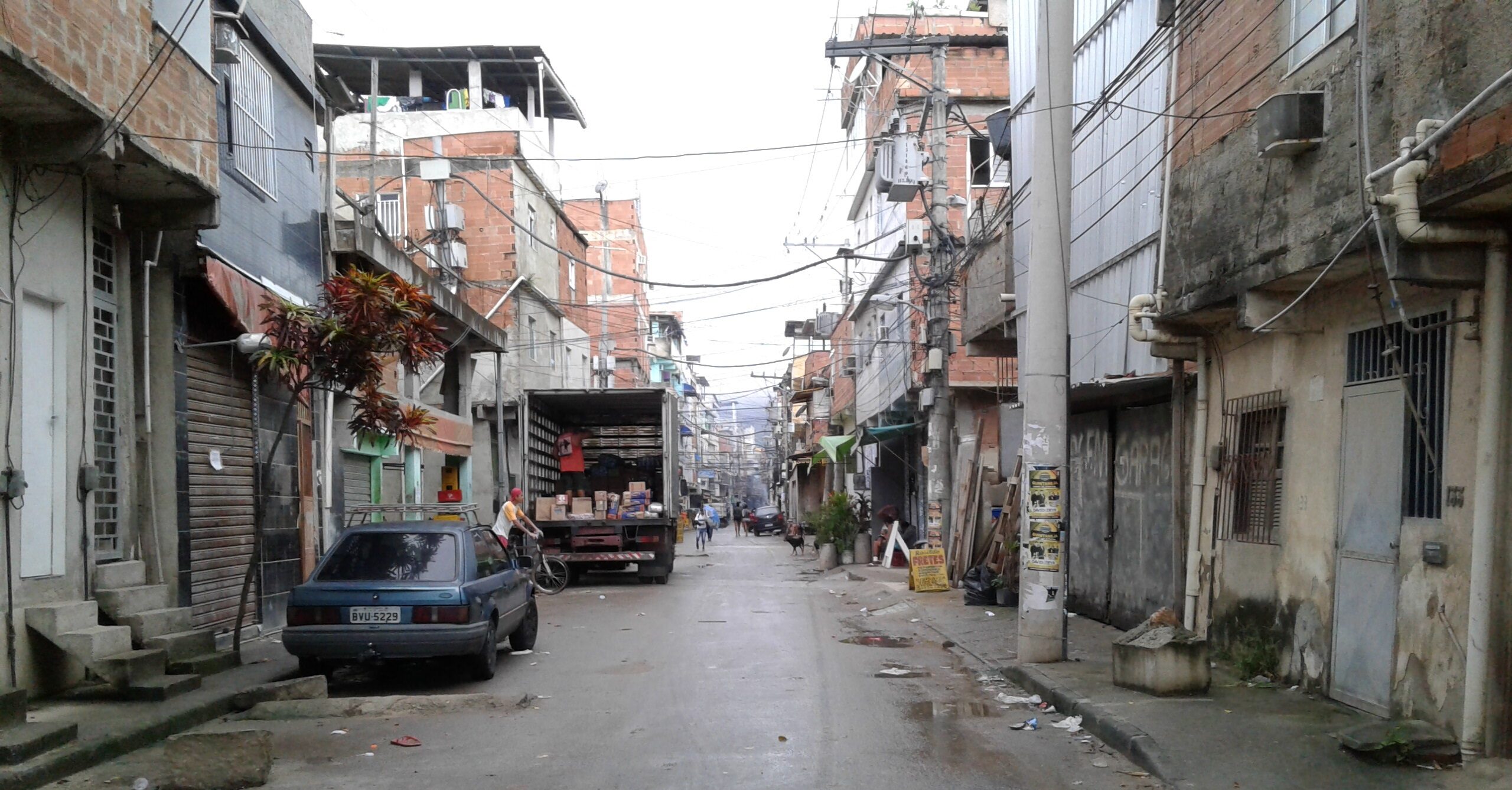 After countless complaints, in the midst of a battle against a city government housing project which would result in the eviction of part of the favela, in 2017 the recently-formed Rio das Pedras Residents’ Commission expressed their concerns and succeeded in pressuring the City Council to approve a law which mandated the removal of the faulty meters with chips.

What About Recognition Justice and Procedural Justice?

This entire process demonstrates that the guarantee of distributional justice in favelas and peripheries still remains a distant dream, bringing us to another notion of energy justice: recognition justice. In the Light Legal project, there was an investment of around R$90 million (US$16.4 million) to install an energy network without, at any moment, consulting the residents of Rio das Pedras.

The notion of recognition justice considers who and what kind of knowledge were consulted in the installation of an energy system. In our case, at no moment was the socioeconomic condition of the population considered, in the sense of guaranteeing accessible prices. In spite of such a high investment, the possibility of diversifying the energy matrix with sources like solar energy was also not considered.

In addition, there were sub-projects within the Light Legal project, such as Light Efficient Community, with aims of: combating waste, replacing incandescent bulbs with fluorescent, swapping out high-energy household appliances (showers and refrigerators) for more economical models, and adjusting consumption to ability to pay. It is worth highlighting the final goal listed, which in my understanding goes firmly against distributional justice, inverting the logic of consumption based on necessity, reinforcing inequality of distribution. 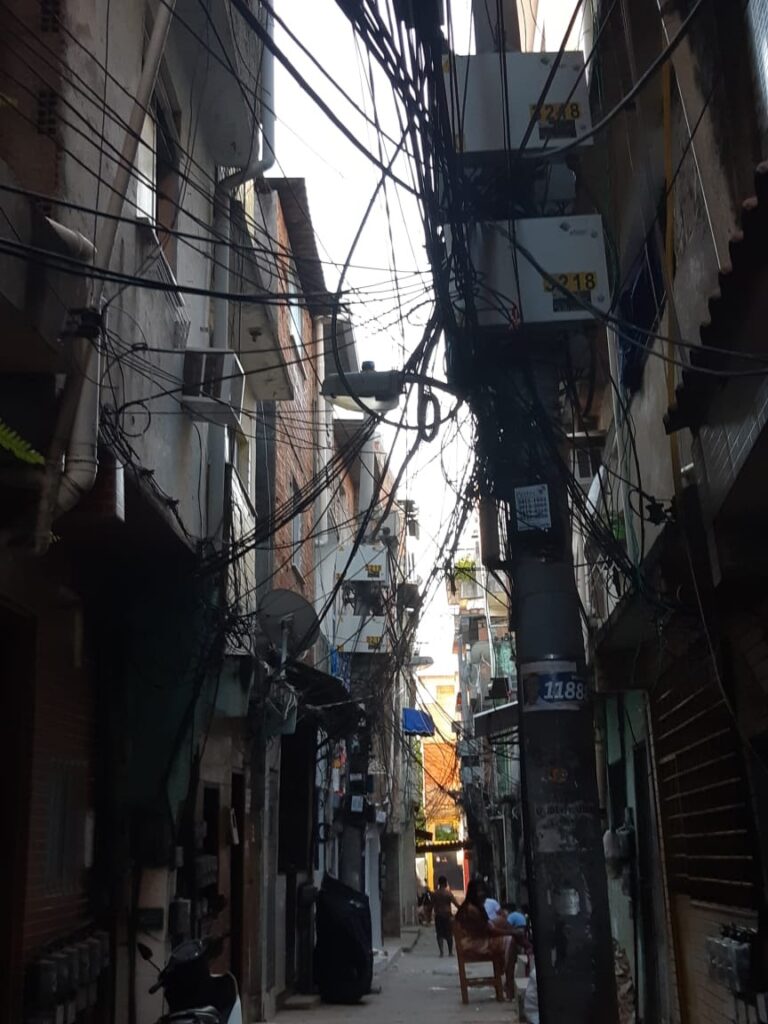 Another one of the sub-projects is Light Recycles, in which solid waste is exchanged for discounts on energy bills. The absence of this subproject in Rio das Pedras demonstrates the total lack of knowledge of this favela, as well as the lack of dialogue with residents, because we suffer from a serious waste disposal problem and do not have a recycling program, although there are many families who earn a living by collecting and recycling these materials.

In light of this, I believe that Light Recycles would help solve two problems experienced in Rio das Pedras—but also in many other favelas—which are: the cost of access to energy and the reduction/valuing of waste. The fact that this project was not implemented in Rio das Pedras reinforces the absence of recognition justice in relation to local demands and specificities.

There was also no recognition of Rio das Pedras’ electricians such as Mr. José Soares, also known as “Batata.” An electrician with over 30 years of experience and a former Light employee, Batata would certainly have had a lot to contribute in the discussion around local consumption and ways to combat energy waste.

This absence of dialogue and lack of incorporating local knowledge are also related to the final dimension of energy justice: procedural justice, especially regarding the politics of participation in identifying demands and proposals for actions.

When it comes to energy, procedural justice occurs when the managers of public projects implement energy systems together with local communities, mobilizing local knowledge accumulated over the course of their histories.

Although the residents of Rio das Pedras, represented by the Residents’ Commission, had an important victory against the abusive increases in energy bills, it was an isolated incident. The bills continued to disproportionately rise, and unfortunately many do not know how to file an appeal. In addition, there is no effective participation in the deliberations of this utility. There is no favela representation on its advisory board, for example.

Based on the history presented here, of abandonment and struggle, we understand that energy justice in favelas is still far from a reality. However, this debate is becoming increasingly relevant and apparent in daily life in favelas. Because it is here that we deal with a poorly provided service with more expensive rates.

In light of this, it is worth returning to the debate about the social role of the “gato” in ensuring distributional energy injustice and the structural roots of its stigmatization.

Douglas Heliodoro was born and raised in Rio das Pedras and is a teacher-educator. He has a master’s degree in education, is a community journalist, and is a founding member of the collective Peripheral Connections.