The administration of Brazil’s standard college entrance examination, the National High School Exam (ENEM), in January and February 2021, is the most explicit manifestation of what the dominant groups in Brazil will never accept peacefully: the advance in the democratization of higher education, however incipient. In the midst of the pandemic, without in-person classes throughout practically the whole year of 2020, the administration of the exam will take place despite the Postpone the Enem campaign led by the National Union of Students (UNE) and the Brazilian Union of Secondary School Students (UBES) clamoring “for a safe ENEM without inequalities.”

In itself, the existence of a selection test for access to public universities ratifies our educational inequalities. The role of the vestibular (Brazil’s traditional college entrance examinations) in a social reality marked by deep class differences acts to legitimize disparities. However, it is important to highlight that in the last two decades, the struggle of different social movements has materialized into numerous affirmative action policies that have achieved important victories in the educational field. Consequently, for the first time in the history of public universities, white, middle and upper-class homogenization was challenged in its mechanisms of reproduction. As an example, the survey “Social Inequalities by Color or Race in Brazil,” released in 2019, showed that the rate of black and brown students enrolled in public universities reached 50.3%.

Within this context of relevant transformations, selection assessments for higher education—such as the National High School Exam—were being seen by peripheral youth as a challenge no longer so impossible to overcome. This is because the strength of popular movements, and of the black movement, in particular, have made themselves evident and, have proved, throughout this time, to be key allies in raising the political awareness of poor students, demystifying the idea of meritocracy and building leadership in the fight for social rights.

Evidently, this movement, which in one way or another has changed the profile of the student body in public universities, provoked strong reactions from the country’s elite. For them, it was inadmissible to share the same historically elitist space with dark-skinned people who live in impoverished neighborhoods. Who was this “rabble” that suddenly thought they should no longer be underemployed or content with the elementary education offered in precarious public schools? 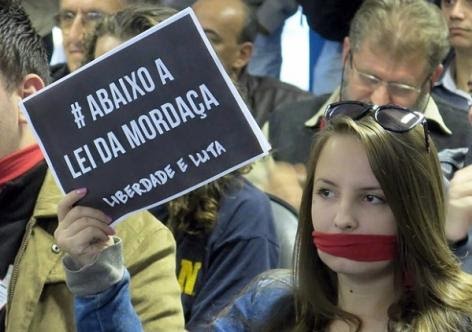 Those who have always believed themselves to be the protagonists of history would never accept the rise of a class other than their own peacefully. That is why they battle tirelessly for the end of affirmative action policies. That is why they create pedagogical projects, such as the notorious School Without Party policy, which rejects critical thinking in schools. And that is why they have imposed Provisional Measure 746/2016 (MP746), a secondary education reform that, in practice, suppresses the right to integral knowledge in the educational process of all students, giving teaching a much more technical character, one that meets exclusively the immediate demands of the market.

Brazil’s current political environment—marked by an extreme right-wing government—has set the perfect stage for the actions of a resentful group that still thinks with a slave owner’s mentality, producing devastating effects on educational policies. It is no longer enough, for example, for the ENEM to be an instrument of selection by social class. Under the current administration, it must also be a merely technical test. Not by chance, the 2021 ENEM silenced relevant current themes, such as questions related to racism, to the history of slavery in Brazil, or even to the period of the military dictatorship—all absent from ENEM questions for the past two years. Amazingly, there were no questions about the Covid-19 pandemic in the first phase of this year’s ENEM.

Francisco Overlande, a teacher in the public school system and also a researcher and popular educator in the Complexo da Maré favelas, presents an excellent diagnosis of this context: “When a test like the ENEM, which in itself is extremely detrimental to the popular classes, refuses to address issues that are relevant to the education of young people, this contributes to a process of exclusion, of silencing. In practice, the old political and economic elites are telling these young people that talking about racism or social equality is of no importance. What they need to know about this has already been said by the official narrative. In other words, [that] we are an ethnic, harmonious democracy, with the virtues of the colonizers.”

At first, these actions may seem random or even devoid of concrete consequences for policies of access to higher education. But a more thorough analysis of these government strategies leads us to conclude exactly the opposite. That is because it is the combined effects of such policies that cause perverse effects. When we prevent the development of a critically aware mind during the basic years of public education, when the poorest are instilled with the false notion that technical pragmatism is more useful than a questioning intellect, or when popular belief is ingrained with the notion that intellectual professions are not for the common worker, only a select group ends up being considered prepared to take on the country’s leadership positions.

“When we prevent the development of a critically aware mind during the basic years of public education, when the poorest are instilled with the false notion that technical pragmatism is more useful than a questioning intellect, or when popular belief is ingrained with the notion that intellectual professions are not for the common worker, only a select group ends up being considered prepared to take on the country’s leadership positions.”

Therefore, in the current political environment, the ENEM does not present itself solely as a consolidation of this power project. The ENEM will be a selection tool that demands extremely shallow knowledge from the candidate, from a critical standpoint—one that is disconnected from social reality and is filled with school content that basically privileges memorization. Well, historically, the students of Brazil’s precarious public schools have always suffered from a shortage of teachers, from only half-taught school subjects, or even content that is practically not even introduced in the classroom. This is a very different reality from the private schools that the middle and upper classes can afford: schools that invest precisely in excess curricular content; that have physical structures conducive to continued study; and, mainly, that teach students strategies to overcome tests of an essentially technical nature. In this way, students from private schools have access to most of the vacancies in the country’s public universities.

In the medium and long terms, this whole set of factors has the potential to gradually undermine peripheral youth’s dreams of accessing higher education. Little by little, self-esteem is deconstructed. The difficulties in adapting multiply and, finally, the massive propaganda that the university is not a place for the poor starts making more sense in the lives of undervalued students. From then on, the result tends to materialize in the greatest desire of the privileged: a country with deepened inequalities of class, race, and gender, managing to keep the old exploitative groups in power.

Perhaps, to date, the 2021 ENEM has been the greatest idealization of the wishes of a class that, for the past two decades, has deeply resented seeing its historical privileges threatened by inclusive public policies. Policies such as racial and social affirmative action quotas, the University for All Program (PROUNI), and scholarships for poor university students are all under threat. A test that should not even have happened at the peak of a deadly pandemic, a pandemic that the current genocidal government has made a point of maintaining, criminally exposing millions of people all over Brazil. A test that the overwhelming majority of students, disadvantaged by the lack of access to studying for the past year, have minimal chances of passing. Remote learning came up against the precarious realities of a large part of peripheral youth, with the Internet rarely being used due to the lack of adequate equipment or even access to a stable connection.

This reality was not experienced by classes with greater political, social, and economic capital. This is because access to school via cell phones and broadband Internet did not constitute a real obstacle for this group. Adequate spaces to concentrate exclusively on studying and the availability of time to do homework exercises also did not present themselves as concrete problems. Therefore, while most poor students were seriously hindered, this other group of young people accumulated even more tools to take this year’s ENEM and, consequently, to enter public higher education without major difficulties.

The words of Ana Beatriz, 22, a student of the college preparatory course of community organization Center for Studies and Solidarity Actions of Maré (CEASM)—the same one attended by Marielle Franco—reflect well this panorama of inequalities aggravated in the context of the pandemic. “I was going to take the ENEM. But I couldn’t study last year. The mood at home, and sometimes the Internet, didn’t help. I’m scared of catching Covid, I still wear a mask, and my mother is in the risk group. I suffer from anxiety, so it’s hard to study alone at home, just me and the computer screen… My nephews, people calling me when I’m studying, that bothers me. It’s hard for me to concentrate when I’m studying. And since I didn’t study, I didn’t want to take the ENEM and feel bad about my score, even though I knew I hadn’t studied. And then there’s the Covid issue. I have taken care of myself until now. I can’t risk it. My mother has hypertension and is 56 years old. That scares me. Plus, I never feel like studying on my own. I like to study in a classroom, where I can ask questions, where I have classmates to help me… In an atmosphere where I can concentrate, where I can study without stress,” describes Ana Beatriz.

Lastly, there was a rate of absenteeism of over 50%, not to mention those who went and could not get into the exam rooms, in a test that is clearly heading to be everything that extreme conservatives so desire. An instrument disconnected from the social reality of the country. A test that does not encourage reflection on our slaveholding past or on periods of suppression of democracy. A test that was deliberately—I have no doubt—not designed to make us think about the key issues facing Brazil in the 20th and 21st centuries. On the contrary, a test that presented topics of a clearly content-based, Eurocentric character, and completely distant from the daily life of millions of students from the popular classes. Not by chance, Minister of Education pastor Milton Ribeiro said that the 2021 ENEM was “a success”. After all, it accomplished what it set out to do. The old, privileged elite will quietly enter the educational spaces they have always thought were exclusively theirs.

Born and raised in Maré, Humberto Salustriano is active in the field of education, especially in community college preparatory courses. He teaches history in the municipal school system of Quissamã, in the Northern Fluminense region, and is a researcher at Maré’s Nucleus for Social Studies and Research (NEPS-CEASM).