According to data from the Brazilian Institute for Geography and Statistics (IBGE), more than 11 million people in Brazil live in favelas, with that population concentrated in the southeast region. As part of this group, I am a resident of the Nova Divinéia favela, in the Andaraí Complex, in Rio de Janeiro’s North Zone. I am witness to how favela residents receive insufficient and careless access to essential services. In conversations with other community residents, I tried to understand their opinions and feelings related to one essential service: electricity.

Resident Sidicley Santos explained that “there’s a difference in treatment when it comes to the service [electric utility] Light provides to the favela. The service is slow, both for paying customers and for those who have clandestine connections. We need to create a committee [of residents]… to strengthen ourselves, join forces and demand solutions from Light and the government to electricity-related problems.”

Resident Adriana Rodrigues described how “people in the formal city receive service because they are regularized and receive their bills on time. In my view, people from favelas should be heard by Light about their needs.”

Resident Luiza Monteiro tried to claim her rights: “I went to Light to find a way of negotiating the payment of my electricity bills, explaining that the amounts charged were very high, and beyond my financial means. I was told that the problem was due to irregular electrical connections in the power grid. I tried to argue with the employee… I was told to seek my rights. For my part, I understood that I was supposed to go to the Public Defender’s Office. [At Light] the issue was left unresolved.”

Unequal Service Between Nova Divinéia and its Neighboring Formal District

According to Gilson Ribeiro, president of the Nova Divinéia Residents’ Association, Light responds better to service calls from residents of Grajaú, the affluent neighboring district. According to Gilson, due to the maintenance of power transformers, some call-outs regarding outages do not happen immediately because Nova Divinéia is considered a “risk area.” Grajaú residents, on the other hand, receive better treatment, having their needs met.

Gilson reported that there are meetings in which representatives from the favela participate alongside residents of Grajaú and officials from Light. He said that there is an effort at unity between the favela and Grajaú residents with the purpose of solving energy supply issues. Gilson considers, however, that the biggest problem lies in the unequal distribution of energy and the unequal service offered to the neighborhoods, as those who live on the “asphalt” [formal city] enjoy all the amenities offered by Light, such as updated and modern meters, and electrical wiring that is both safe and regulated.

Light consistently projects the image of treating everyone democratically. In most of its actions, however, people with better financial means get better treatment. Residents of the formal city receive better service, and the favela also has to deal with an absence of inspections and interaction between company employees and residents. 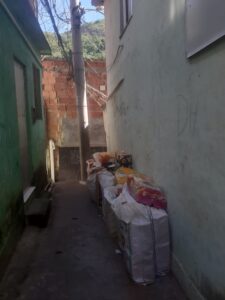 This inequality in the service Light provides Nova Divinéia is evident in key points, such as: cronic power outages during peak hours, when most residents use electricity at the same time; electric bills not reaching homes—they are delivered to the Residents’ Association; and  the company’s improper reading of electric meters.

The “Social Tariff” electric subsidy benefit was announced in the favela, and a few residents went through a registration process at the Reference Center for Social Assistance (CRAS). These residents reported, however, that not only did none of them receive the benefit but that the amounts charged became excessive, well above what they should have been paying after registering.

Finally, residents of the community end up trying to escape the high rates charged for the supply of electricity using illegal connections (famously known as “gatos” in Portuguese). The “gato” is the most viable means to ensure electricity that has been identified by residents, despite their setups being made without Light’s guidance or supervision. The “gato” is the way the community found to make energy distribution more accessible. 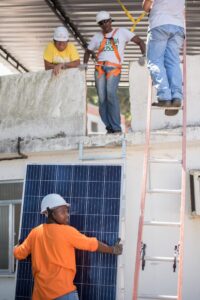 This scenario of energy injustice leads me to reflect on an emerging energy service, one that can help with energy efficiency and justice in favelas: solar energy. With such an abundance of sun, there is an incredible possibility of having clean and sustainable energy, by natural means, to meet the needs of several people who were forgotten, “on the margins” of society.

We already have examples of communities in Rio that are adopting the use of solar energy. In Chapéu Mangueira and Babilônia favelas, in the South Zone, RevoluSolar, a community-based cooperative, produces and manages renewable energy. RevoluSolar works collaboratively in these communities with volunteers, entrepreneurs from the favela, and the residents’ associations of Babilônia and Chapéu Mangueira. Showing that it is a visable solution, RevoluSolar already has panels installed at a community school, Escola Tia Percília, in Babilônia, in addition to two more pilot projects: setting up solar panels at the Babilônia Rio Hostel and at the Estrelas da Babilônia restaurant.

Initiatives like this point to a more promising future and should complement public energy supply policies that value energy justice and equal rights, bringing efficient services that will meet the needs of all communities that suffer from precariousness and with the high cost of electricity services.

The unequal conditions, which we are always exposed to in favelas, are due to our humble origins. The vast majority of residents of the Nova Divinéia community face social and racial prejudice. We, the black and the poor, do not have equal opportunities regarding studies and job vacancies, which for the most part go to people from higher social classes and whites. Inequality in electric service is part of this context.

About the author: Born and raised in Nova Divinéia, Rodrigo Silva graduated from Colégio Santo Inácio and is an IT technician and a micro-entrepreneur in the same area. His current aim is to act in a network defending rights and improvements for Nova Divinéia and for favelas in general.

About the artist: Rodrigo Cândido is an illustrator and comics artist, whose focus is to put black people in every imaginable narrative. His work has influences of Afrofuturism, games, music, and the history of the great black men and women who have shaped humanity.