This is our latest article on Covid-19 and its impacts on the favelas. For the original article in Portuguese, written by Angela Boldrini and published in Folha de São Paulo, click here.

On Tuesday, March 16, grassroots movements and NGOs launched the “People Are Hungry” campaign with the aim of providing basic food stuffs to almost 223,000 Brazilian families.

The initiative is led by the organizations that make up the Black Coalition for Rights, which brings together over 200 organizations linked to the nation’s black movement, Oxfam Brazil, Amnesty International Brazil, ABCD (Brazilian Campaign Against Inequalities), Nossas, Redes da Maré and 342 Artes.

Furthermore, the coalition organizations will be setting up collection points for the donation of food items, cleaning products, and Covid-19 safety products, such as face masks and alcohol.

The project will be working, primarily, in 18 states and Brasília, in addition to being assisted by organizations with nationwide reach, such as Uneafro.

“Throughout the pandemic, the black movement has been giving humanitarian assistance to many communities, and we saw that the urgent cry for food has returned in full force,” says Lucia Xavier, coordinator of NGO Criola, a member of the coalition. 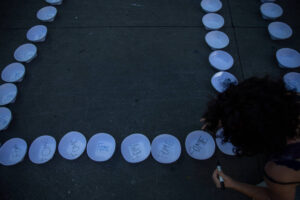 She explains that pleas for help multiplied after the end of the emergency aid, paid until December 2020. “Families still had some money in January, but the number of requests increased enormously in February,” she says.

In 2020, the cost of basic food stuffs grew at three times the rate of inflation, and unemployment reached more than 13 million people. A Folha de São Paulo article also featured a Brazilian Institute for Geography and Statistics (IBGE) estimate that, with the end of the emergency aid, one third of the Brazilian population would be led into poverty.

In an optimistic scenario, it was expected that 16 million people would have to live on less than R$522 (US$95) a month. In March, Brazil’s National Congress approved that payment of emergency aid be resumed to the most vulnerable part of the population. Distribution of the aid, however, will only start in April.

For this reason, according to Lúcia, the idea is to start distributing food as soon as donations start coming in. The organizations intend to help families waiting for the arrival of the new emergency aid.

“We will prioritize black mothers, who are the most vulnerable, and who either hold precarious jobs or are unemployed. They are the ones who take care of the children and of the family as a whole,” says the coordinator.

Another criterion for the order of distribution of resources will be regional. According to Lúcia, the reports coming in from the country’s Northern and Northeastern regions have been worrisome. “At the same time, it is quite likely that we get more food and product donations in the Southeast. It is a wealthier region, but also fraught with inequality,” she says.

The campaign is backed by artists such as musician Zeca Pagodinho, who recorded a video with the verse “if people are hungry, give them food.” The phrase is a reference to the poem “Tem Gente com Fome” (People Are Hungry), by Solano Trindade (1908-1974). 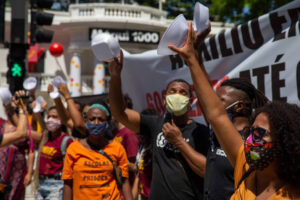 The Black Coalition for Rights is also seeking business partners for the initiative, such as supermarket chains and other businesses, to donate cash or products for direct distribution.

On the website created by the movement, donations can be made starting from R$10 (US$1.80). This, according to the organizers, equals about two kilos of food for distribution. The estimate is that each family can count on receiving baskets containing approximately R$200 (US$36) worth of food items.

Local organizations mapped the families that will be assisted. Some groups, like Bahia’s Terreiro do Cobre, have 150 families listed for distribution. Others, like Redes da Maré, in Rio de Janeiro, intend to help approximately 20,000 homes.

“The idea is to provide something that will guarantee a minimum means of survival. To give families the means to buy rice, beans, some kind of mix. So that they can diminish their struggles as much as possible, for a little longer,” says Lúcia.

Click here to make a donation directly to the Brazilian Coalition for Black Rights’ ‘People Are Hungry’ campaign. US-based individuals seeking a tax exemption or those in other countries who would like to do so, may also choose to donate here by writing in the ‘earmark’ category: People Are Hungry.