This article is part of a series on energy justice and efficiency in Rio’s favelas. It is also part of a series created in partnership with the Center for Critical Studies in Language, Education, and Society (NECLES), at the Fluminense Federal University (UFF), to produce articles to be used as teaching resources in public schools in the city of Niterói, Rio de Janeiro’s sister city across Guanabara Bay.

One of the objectives of energy justice is to seek participatory dialogues around our current energy model and ways to optimize it, as well as look for alternative models that are healthier and inclusive, that respect human rights, and meet the Sustainable Development Goals (SDG).

In this context, I would like to share some of the awareness-raising and capacity-building activities that have been taking place in São Gonçalo, in the neighborhood of Jardim Catarina—the largest informal subdivision in Latin America—with the aim of reducing energy consumption and waste in the community. These activities are the product of partnerships between community organizations and Enel, a multinational energy generator and distributor.

The activities that have happened, and that are still taking place in the neighborhood as part of the Enel partnership, are linked to two community organizations: the Association of Residents and Friends of Jardim Catarina (AMAJAC) and the Jardim Catarina Community Center (CCJC).

The Partnership Between AMAJAC and Enel

According to Policarpo Meireles, coordinator of AMAJAC, “Enel helped by organizing talks on energy efficiency awareness and, also, on the social side of things offering community support, from 2004 until 2015, when outreach projects underwent changes due to changes in the company’s management, which affected this type of operation in vulnerable communities.”

Working in tandem with Enel, AMAJAC was able to increase the number of locations where the local population could access humanized assistance through the Enel On the Move project. Enel On the Move is currently based in the AMAJAC office and offers the community services such as: changing the name of account holders; helping residents sign up for the “social tariff” (a special electric subsidy benefit); or helping people pay their bills in installments. Meireles spoke of the importance of in-person support: “AMAJAC was concerned about humanizing services, making sure that we weren’t just helping people as if we were at an [Enel] shop.” 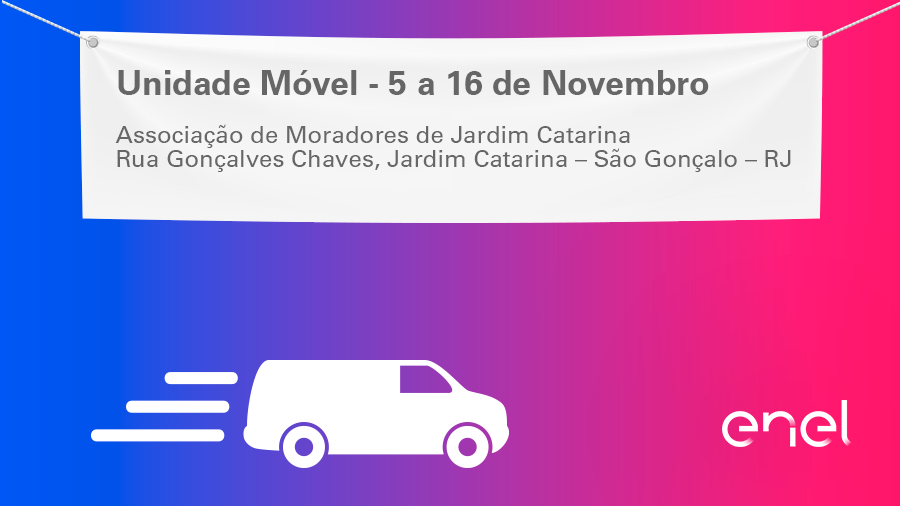 According to Meireles, the Enel On the Move service is available twice a week and demand has increased constantly over the summer. Around 80 people a month come to Enel On the Move for help with issues such as duplicate bills or formalizing payment in installments.

The partnership between Enel and AMAJAC has also led to the creation of workshops about energy efficiency seals and consumption; swaps for more energy-efficient light bulbs and refrigerators; and even the rewiring of homes when families could not afford to make changes to reduce energy usage.

“The talks given by Enel are normally attended by 100 to 105 people who come to the association. Some are interested in finding out more about Enel’s services, and others are interested in trading in their light bulbs and fridges. At the last meeting, on January 19, we had around 105 people taking part in the talk and swapping their lightbulbs,” said Meireles. 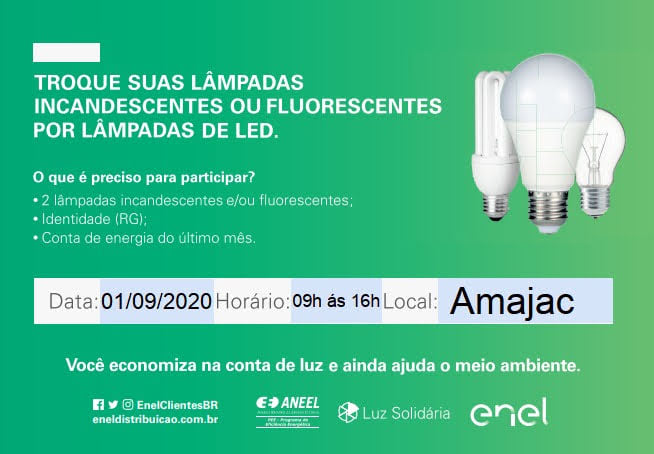 The AMAJAC-Enel partnership also set up an IT center in the community, equipping a room with ten computers, desks and chairs and offering IT courses for young people and adults. This project took place in 2015, 2016 and 2019, with 180 students benefiting in the first year; 160 in the second year; and 240 in the third year.

Meireles believes that there is still a lot to be done and that the projects that have already taken place have contributed a lot to the community, raising awareness among locals through capacity-building, workshops, and talks. Enel has not been offering services at the association since March 2020 because of the Covid-19 pandemic. Meireles considers the absence of this community service to be a great loss for the community. 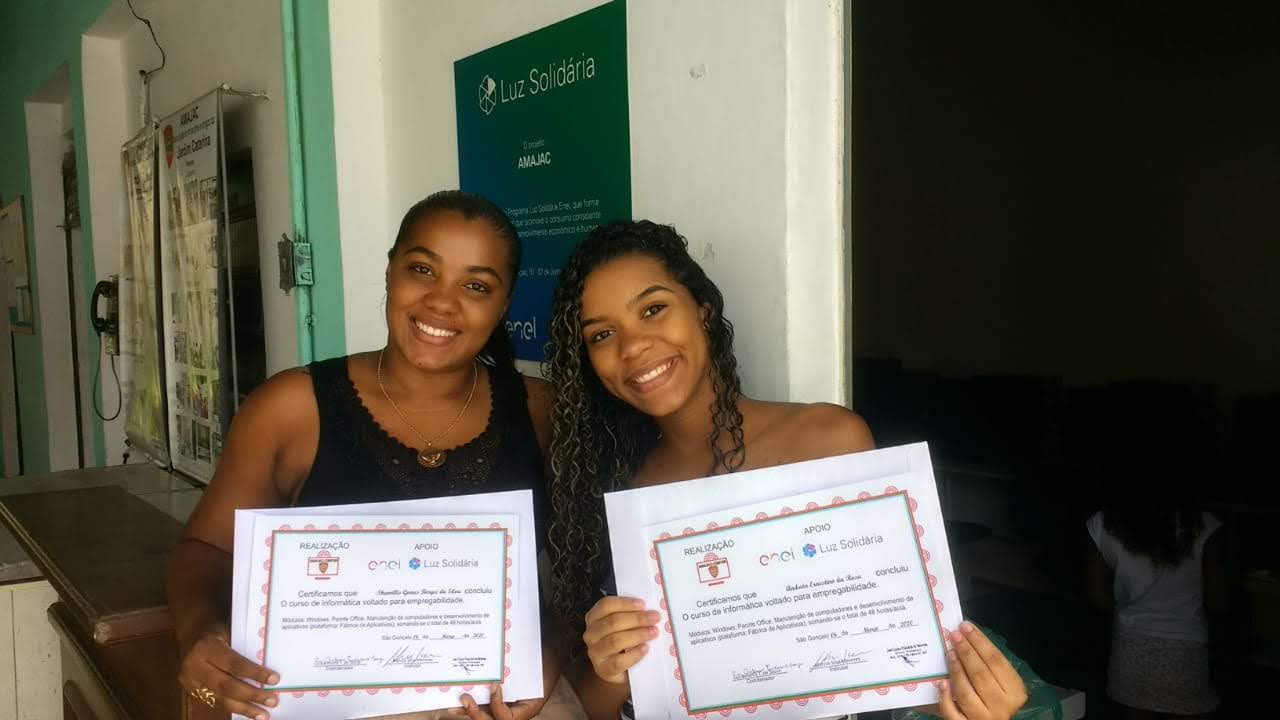 The Partnership Between CCJC and Enel

Other community activities have taken place through the partnership between the Jardim Catarina Community Center (CCJC) and Enel. There, the company offers the following projects: Enel Shares Leadership Network, Enel Shares Entrepreneurship, and Solidary Light.

Rosilene Rodrigues, CCJC coordinator, says that the Enel Shares Leadership Network initiative took place at the center a few times via information workshops with residents. For these workshops, Enel generally sends over a speaker who brings along a mockup of a house hooked up to electricity to explain energy efficiency; what tools can be used to save energy and decrease consumption; how to care for home appliances; the difference between old and new technologies; and the energy-efficiency seals that come on appliances—which indicate degree of efficiency according to the alphabetical letter used.

Participants in the workshops can swap their incandescent or fluorescent light bulbs for LED ones, allowing them to save money on electricity while helping preserve the environment and natural resources. The workshops are also a chance for people to swap old fridges for new ones with a better energy rating and lower energy usage. 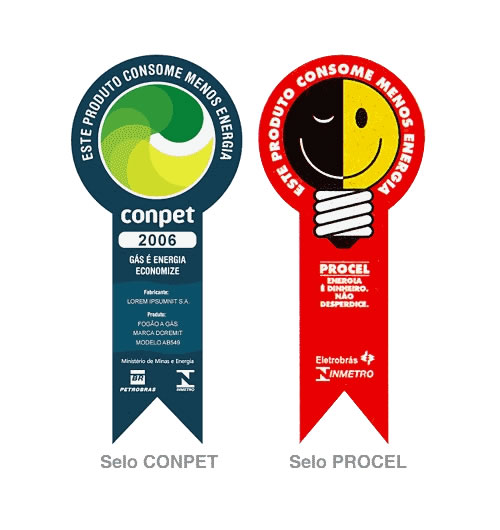 According to Inmetro, in the case of home appliances that run on gas, those that achieve the lowest consumption of the fuel are given the Selo Conpet. Electrical appliances, on the other hand, are granted the Selo Procel annually with the aim of “helping consumers choose what to buy, recommending products that have the best energy efficiency ratings in each category.”

Within the scope of the Enel Shares Leadership Networks project, local leaders get in touch with the company if any issues regarding the community’s energy supply arise. Community leaders can use WhatsApp to identify the needs and demands of each group, and request immediate assistance with services such as power outages at homes; problems with street lamps; and trees that need pruning. According to Rodrigues, the initiative organizes monthly meetings with each network at Enel headquarters, though these have had to take place remotely during the Covid-19 pandemic, opening a direct communication channel for the local community to identify local demands and to create a relationship based on trust and complicity between the company and the population.

Another initiative, Enel Shares Entrepreneurship, promotes meetings between partners, during which groups that work with businesses and crafts take part in monthly capacity-building meetings which include tips on entering public bids, human rights discussions, and workshops about becoming an entrepreneur. This project has also been taking place remotely during the Covid-19 pandemic.

Finally, the Solidary Light project has only taken place once at the CCJC building, with the aim of training young people between ages 16 and 29 to work in the IT industry, offering training courses on how to put together and maintain computers.

Rodrigues approaches the CCJC-Enel partnership pragmatically, focusing on CCJC’s mission of supporting residents. As a large private company, Enel, on the other hand, is focused on offering its services and acting within the law inside vulnerable municipalities. For this reason, the community center does not participate in all the projects proposed by Enel.

Rodrigues clarifies this: “When the CCJC participates in activities that have to do with entrepreneurship and solidarity, we are meeting the needs of residents of Jardim Catarina through workshops and courses. When Enel asks us to go on visits around the community to identify clandestine connections, lamp posts that need changing, light meters that need fixing, and other such services, we understand that the company has paid employees to do this kind of work, so we don’t participate. When we feel that projects benefit residents by empowering them, that’s when we participate.”

According to Rodrigues, it is notable that the majority of project participants succeed in reducing energy consumption in their homes, because normally when Enel offers activities in the community, they sign people up and then visit them to find out what their energy usage is like. At the CCJC, if you add up all the projects and activities to do with energy efficiency, it shows that the number of people reached was around 600. The project saw about 100 people every week, and the monthly energy efficiency meetings had between 50 and 60 participants. 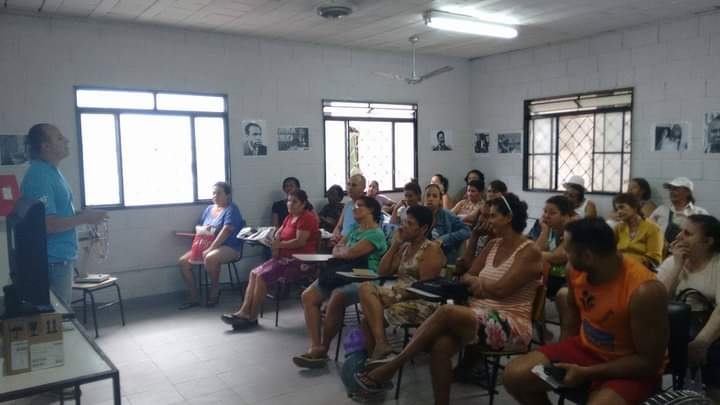 Dona Lurdes, 65, a longtime resident of the neighborhood who participated in the activities developed at CCJC, says, “I was able to learn a lot in the meetings I attended. I learned how to save energy, I learned to be more organized at home and to look after my light bulbs. I was given many light bulbs and managed to swap almost all the ones I have in my house. It was great, I learned a lot.”

Bruno, 25, who took part in previous workshops, says, “the meetings were very good, well worth attending. They’re no longer taking place, unfortunately, but they should start again. I learned about things that I had heard about before, little things that we already know but don’t actually do, and when we do follow the tips, we see the difference.”

From the actions described, in partnerships that involve outside businesses and organizations, and community-based organizations, it becomes clear how crucial it is to figure out what is a good fit for the community, and to therefore ensure that these activities create an impact in the life of the population.

In Jardim Catarina, these choices were based on working transversally with the neighborhood’s community centers, where the channel between local centers and the company are the main path for building and requesting services that are beneficial to residents. The community centers thus work as disseminators of information and allow projects, workshops and local services offered by Enel to take place, so that residents do not have to go to physical shops to solve their energy issues.

It is clear to see that the citizen participation fostered in Jardim Catarina by AMAJAC, CCJC, and other grassroots groups have made it possible to disseminate Enel’s actions regarding energy efficiency, as well as other issues.

About the writer: Marcyllene Santos, 25, was born and raised in São Gonçalo. An undergraduate in environmental sciences at the Fluminense Federal University (UFF), she works in education and actively supports education in peripheries. She is the founder of community organization Nós Por Nós (Us for Us) – For more rights and less social inequality.

About the artist: Born and raised in Complexo do Alemão, David Amen is co-founder and communication producer of the Roots in Movement Institute, a journalist, a graffiti artist, and an illustrator.