Art is especially powerful at resignifying symbols and introducing new narratives, two elements that make it a fundamental tool in the struggle for equity among black Brazilians. Besides supporting the affirmation of blackness, it is also a means to get to know and connect with one’s roots, ancestry and the stories that “official” History does not tell, as the 2019 Mangueira samba school song, A Bedtime Story for Grown-ups, already a classic, reminds us.

There’s an entire ecosystem that surrounds black artists’ productions, involving many other professionals who are also black, who also earn their livelihood, or most of it, from cultural production. When the economic aspect is not directly involved, there is a commitment that spaces are built or activities are promoted stemming from these presentations—encouraging meetings, giving origin to dialogues, reflections, and black smiles.

With the coronavirus pandemic, all these initiatives had to put a hold on in-person events, to reflect on the current moment and how they could carry on. “2020 was an extremely challenging year, especially for artists and culture professionals. In the face of so many losses and unimaginable changes in society, staying active and creative is a great victory,” says Ana Paula Gualberto, coordinator and one of the creators of LH2 – Leopoldina Hip Hop, a project born in Arena Carioca Dicró, in Penha, from the necessity to include Hip Hop Culture and Rap programs in public community cultural spaces and, usually, for free.

Gualberto recalls that, if on the one hand the quarantine forced everyone to interrupt in-person events, on the other, it made it possible to think of other formats. That was what happened to the LH2-Leopoldina Hip Hop Year 3 Edition. In this edition, the team appeared physically in the Carioca Dicró Arena and, from there, the festival was broadcast live to the audience—and, in this way, what used to be a face-to-face event turned into audiovisual content, with artistic presentations, DJ sets and interviews. Exhibited through YouTube, audience interactions were encouraged via chat, including registration for raffle prizes and services provided by supporters. Now, in 2021, Gualberto says that the LH2 will maintain the same remote format, though there is the possibility of having the festival in other favela and peripheral cultural spaces in the Rio de Janeiro Metropolitan Region: “We are excited to meet these new challenges.”

Lives and Hybrid Formats: Possibilities for the Current Times

The virtual format—with live videos broadcast over the Internet, known in Brazil as a “live”—was the reality to which several artists and cultural producers had to adapt. According to the ICT Households Survey—which measures the number of households using information and communication technologies—three out of four Brazilians access the Internet, equivalent to 130 million people. However, according to data collected by Folha de São Paulo, 70 million have poor or nonexistent access. This, makes the challenge of communicating, realizing and disseminating artistic events even greater, especially considering that the target audience consists of the working class (classes C and D), mainly made up of Afro-Brazilians. Thus, between 70 and 90 million Brazilians cannot access these new forms of online cultural events. 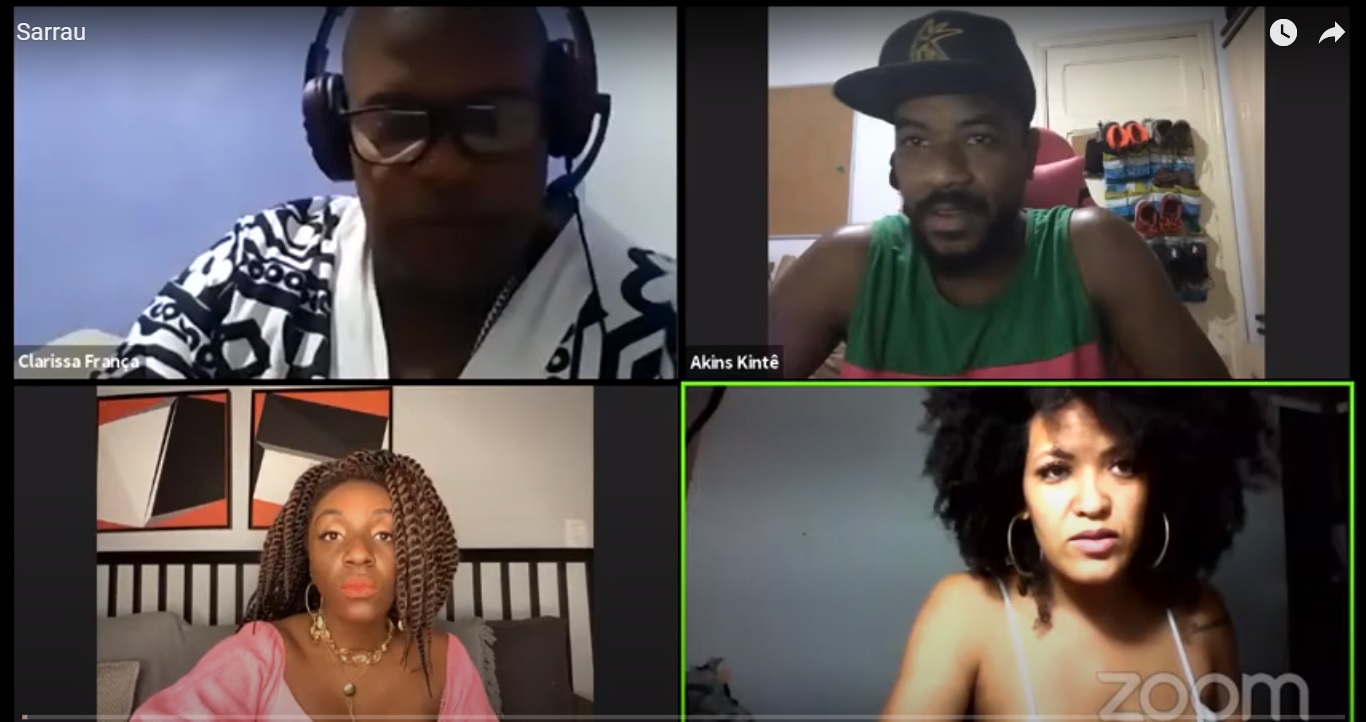 Cizinho stresses the challenges of the adaptation process, but underscores how important it was to help maintain the mental health of those involved, as well as the audience’s: “We heard many stories of people who kept waiting for the day of the meeting to talk to other people and recite their poems.” Despite the difficulties, Cizinho says that this has also been a rewarding experience. “We had people from Brazil and other countries like Mexico, Cape Verde, and Angola who were present at our soirées and study group. That was something extraordinary for us.”

To Black Men and Black Women,
The COME BE A BLACK WOMAN AND BLACK MAN STUDY GROUP was created and implemented by Denigrate (a Collective of black students, women and men, from the Rio de Janeiro State University -UERJ), which has led discussions and actions in favor of the black community and our re-centering on Afrika, since 2005.

Next Sunday, September 12, 2020, we will be broadcasting the study group live through the Denigrate (Facebook and YouTube) channels with the more than special participations of Sister ANA MUMBUCA, along with the QUILOMBO MUMBUCA RESEARCH GROUP (GQMP), and brother Master NEGO BISPO, from the Saco Curtume Quilombo (São João/Piauí).

The reference text is Sister Ana Mumbuca’s dissertation, where she presents, from an anti-colonialist perspective, a study on the Mambuca quilombo, located in the Municipality of Mateiros, in the interior of the State of Tocantins.

The hybrid format—consisting of a reduced in-person audience, plus Internet broadcasting—has also proved to be an interesting option. Grão Conecta was a series of online events that took place over the months of September through November 2020, bringing together bands, DJs and MCs at the Grão Coworking space, in Irajá. The objective was to stimulate the local artistic scene and, consequently, the place where it was realized—both a coworking space and events venue. Mônica Vieira, executive producer of the space, underscores that the format requires the involvement of a bigger team. “It was everybody’s first time organizing an event of this type. The format was already a trend and is becoming a legacy of the pandemic,” says Mônica. The venue reduced by 75% the capacity of an in-person audience, who watched the performances be projected outdoors. 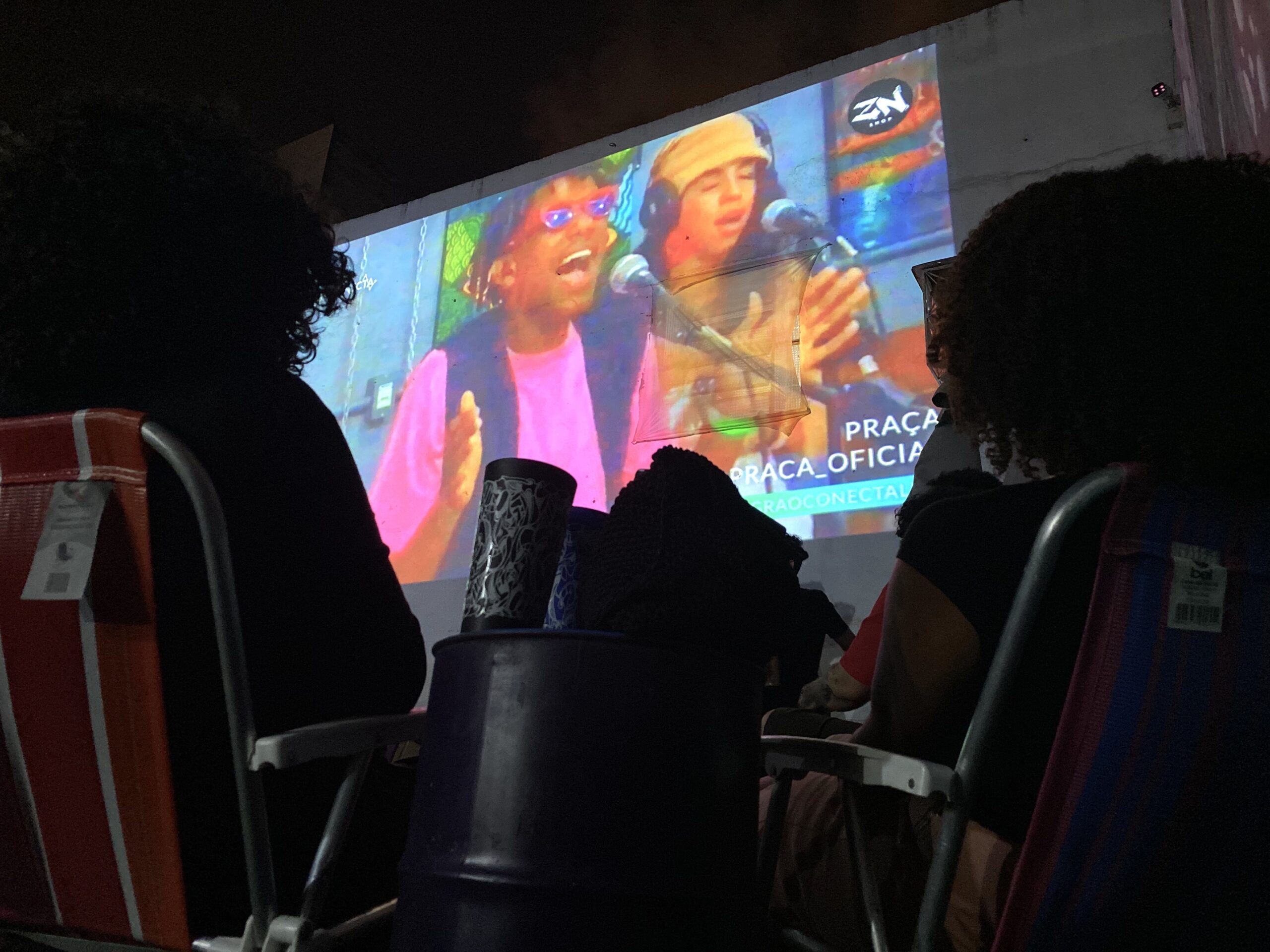 Murilo Borges, member of the band Praça and one of the founders of Grão Conecta, highlights the results of this endeavor: “There were people involved who consulted on the production of online events, and then found more work in the same field. There was a repercussion on the portfolio [giving visibility to those involved] and it brought the collective a lot closer,” he concludes.

About the author: Nyl de Sousa is an MC, communicator, cultural producer, and art educator. An urban and popular culture enthusiast, he researches the connections between the African diasporas using urban music as his starting point. He is one of the coordinators of LH2—Leopoldina Hip Hop and a member of the Observatório de Favelas communication team.

About the artist: Illustrator Yara Santos is a student of generalist design at the University of São Paulo (USP). Born and raised in the periphery of São Paulo, she seeks to represent elements of the black and peripheral culture in which she is inserted in her art. Most of her production is centered on digital techniques.