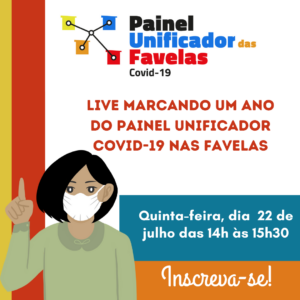 On July 22, the Covid-19 in Favelas Unified Dashboard, an initiative that brings together 24 favela collectives and civil society allies, held an interactive live event to mark one year since its launch. The event featured new historical data that showed the evolution of the pandemic in favelas over the past year. Moreover, through testimonials from community leaders, the event provided a retrospective analysis of past and present effects of the pandemic across a number of Rio de Janeiro communities. The event’s “fishbowl” format allowed for broad public participation.

“This chapter [fighting Covid-19] has already become a part of the favelas’ history. For decades, we have noticed the absence of public authorities in certain communities. We need to recognize the Dashboard’s work during the pandemic.” — Mariana Galdino

Williamson opened the discussion with a brief history of the Dashboard. During her presentation, she explained that the CatComm team had begun hearing about coronavirus cases and deaths in favelas as early as April 2020, when these data were absent from official statistics and the mainstream press. Consequently, CatComm joined together with 23 other collectives and organizations working in favelas over the course of the pandemic, voluntarily collecting and publicizing data on Covid-19 across the city’s favelas, in order to push for responsive public policies. This is how the Covid-19 in Favelas Unified Dashboard came to be. 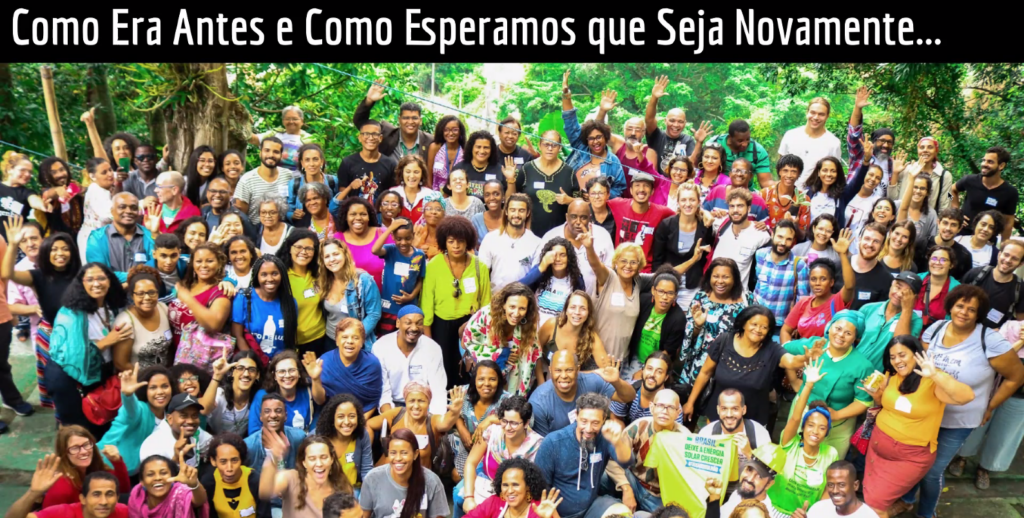 When the pandemic began, favelas already experienced pre-existing conditions that would ultimately exacerbate Covid-19’s impact, such as chronic neglect by public authorities, scarce resources, high density, and inadequate access to health care and water. However, this particular political moment brought with it additional compounding conditions which made the pandemic extra deadly to residents, such as government leaders trivializing the pandemic, insufficient and delayed economic support, insufficient testing, underreporting, stigma around Covid-19, and anxiety. 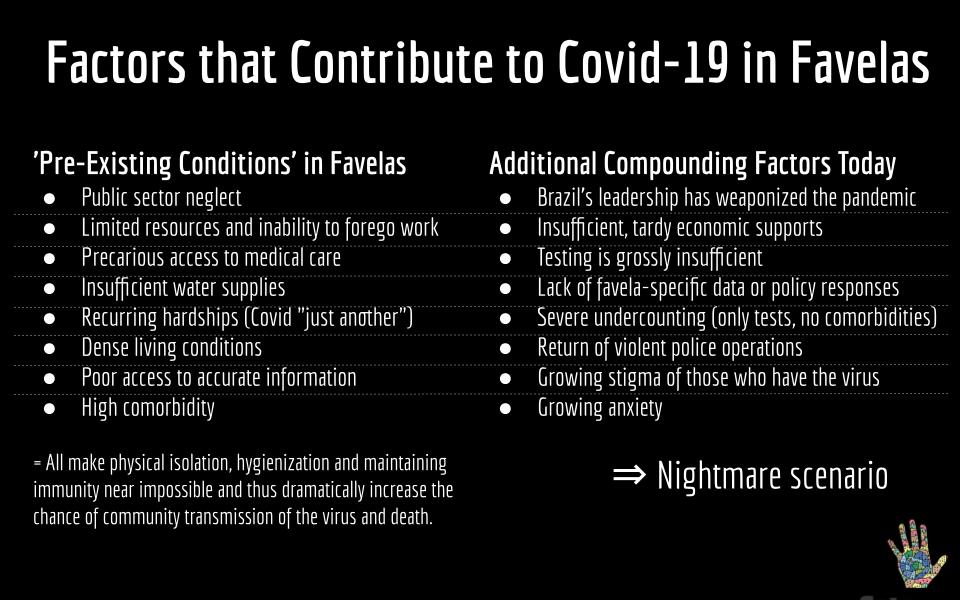 As a result of all this, data collection became a high priority. Without data, there is no policy response. “Without data, there is no proof that something needs to be solved. It’s convenient for public authorities not to collect data in favelas. At first, one might say it isn’t possible, but the Dashboard has shown that it is. Public authorities should have been doing this in real time so we could have had an immediate response and not be here a year later [analyzing data retroactively],” said Williamson. “The Dashboard’s mission is to ensure data on Covid in the favelas to push for informed, responsive and effective public policy.”

“Today we cover 336 favelas in Rio, and 70% of the favela households in the city. To date, we have had almost 80,000 confirmed cases and over 6000 deaths, which is a higher number than in 166 entire nations. Our situation is unique in the world and the Dashboard has been trying to bring that to the light.” — Theresa Williamson 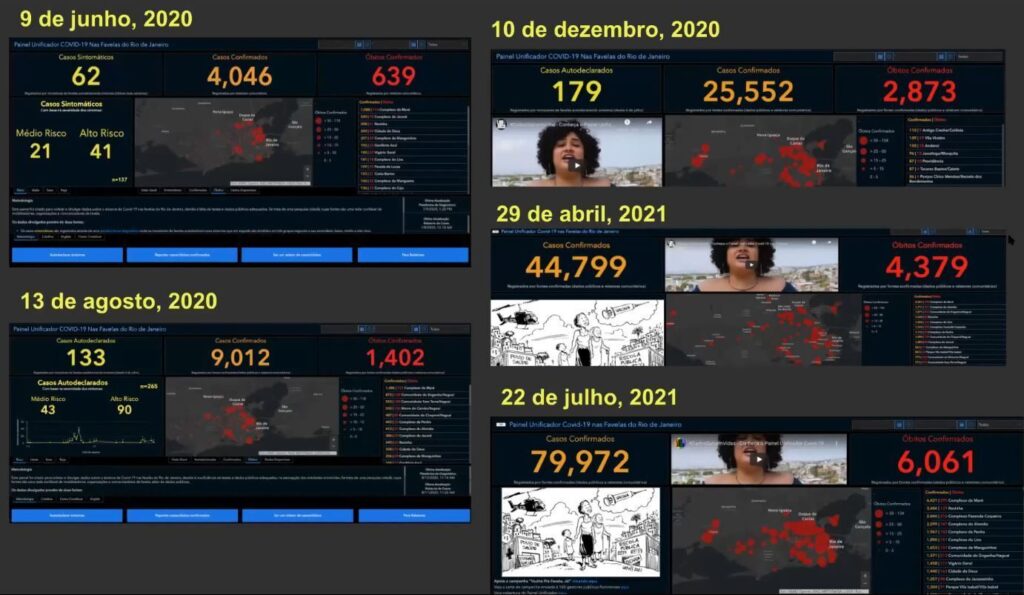 Williamson asserted that the Dashboard will not stop there. The idea is to continue and expand its work, accompanying favela organizers tracking the impacts of the pandemic. “We also want to complete the data so they cover 90% of favela households and then publish a technical note with the complete historical analysis, improve municipal maps of the favelas and ensure that community organizers are recognized and their actions are invested in so that a tragedy like this is never repeated,” concluded Williamson.

Renata Gracie, from Fiocruz’s Institute for Scientific and Technological Communication and Information in Health (ICICT), then stated that there is no science without a relationship with the population. “If we don’t have data from a certain period, surveillance will run into more difficulties to act. Besides, if we can’t manage the pandemic, we won’t be able to get back to work. And while we can’t get back to work, poverty will keep deepening. The importance of data therefore touches on all these issues.”

In sketching an overview, Gracie said that Brazil represents 10% of the cases of Covid-19 in the world and 13% of deaths. In comparison to other countries with higher caseloads than ours, mortality in Brazil is the worst.

“We collect data on Brazil with increasing agility as civil society divulges information through Brazil I.O, but in the favelas, access to data is not so easy. If we look at the official data, there is a lower incidence and mortality by Covid-19 in the favelas, but, lethality is actually higher,” explained Gracie. 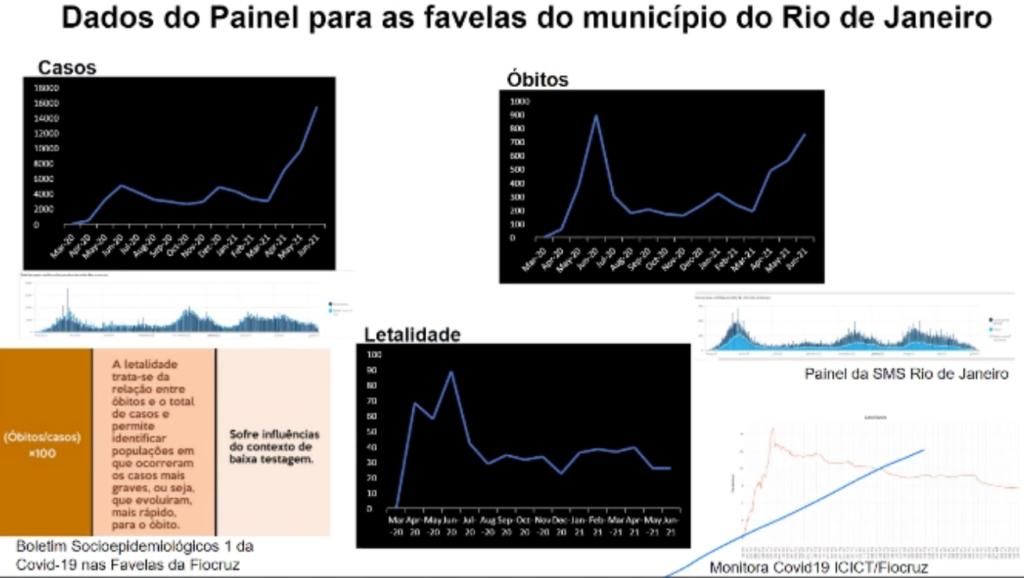 Gracie made a rather alarming update during her speech:

“With the data collected to date, we have noticed that in recent months the number of cases and deaths in the favelas are on a growth curve, while they are decreasing elsewhere in Rio. The communities with the highest number of new cases at the moment are Rocinha and Complexo da Maré, while the highest number of deaths is in Maré and Jacarezinho.” — Renata Gracie

Once the presentation of the data had finished, the debate in fishbowl format began, with a sequence of presentations by community organizers who use the Dashboard in their favelas. Anna Paula Salles used the time allotted to highlight the importance of the Dashboard and of communication within communities: “The Dashboard has served as an instrument to give people a voice and opportunity, because even by conducting simple research within the communities, we can collaborate to access this technology. I would also like to emphasize the importance of community-based information. A lot of people are dismissive, but we know how important it is. An example of this is that we already knew about the Delta variant case in our city before this information was officially released.” Later, Ana Leila affirmed that in Mesquita there are already seven people infected with the Delta variant. 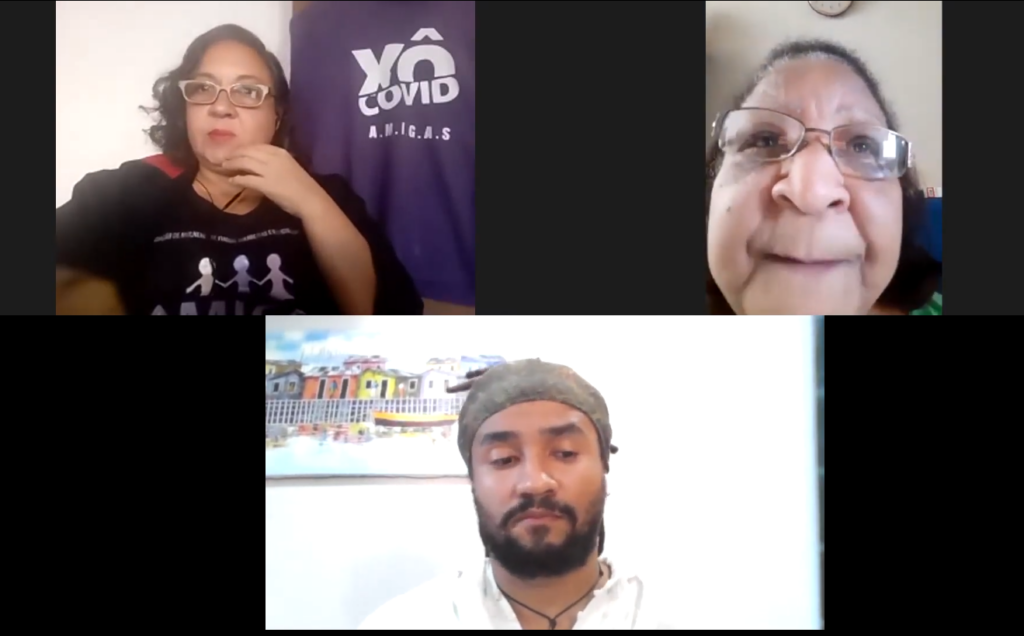 Next, Marcia Helena took the floor and spoke about the problems favelas have been facing, such as hunger and stigma, besides emphasizing the importance of the vaccine and Brazil’s universal public health system (SUS). “We, from the favela, suffer a lot of prejudice; people think that the disease is worse within the favela because we are Afro-Brazilians and from favelas. So, they think we get the disease worse than they do.”

Douglas Heliodoro said that this event could have been a commemoration of one year since the Dashboard’s launch, but unfortunately the numbers show there is nothing to celebrate. “I would like to reinforce the importance of the Dashboard and the educational role it has played. The maxim ‘together we are stronger’ has never been truer. The fight against Covid in the favela is accompanied by several other struggles, such as the fight for housing, hunger and against police operations.”

Fabio Leon, from Fórum Grita Baixada, congratulated the initiative, especially for working in a country with a denialist government. “We had help from over 40 organizations here in the Baixada Fluminense to face this situation, and none were public agencies. We had to employ the maxim ‘by us, for us.’ We hope that this pandemic ends soon,” he said.

Mariana Galdino talked about LabJaca, a research, data production and narratives laboratory in the Jacarezinho favela, which emerged during the pandemic, precisely because of the data discrepancies during the biggest health crisis of the century: “It was in large part due to the Dashboard, so we have a lot to be grateful for. We have a huge number of starving people, besides the massacre that took place in Jacarezinho during the pandemic. The State will find ways to kill us and say that our lives don’t matter. We need a State that serves us, that represents us.”

Jacob Portela talked about the Building Together Research Collective, which has been conducting research in City of God about the impacts of the pandemic: “From this, we came up with the idea of collaborating with all entities in City of God and forming a collective, the City of God Against Covid campaign. We ran an awareness campaign about face masks as a preventative measure. Recently we also put a sign in the main square of City of God with the number of cases and deaths in the favela to keep the population informed and aware. It has been a very fulfilling experience.” 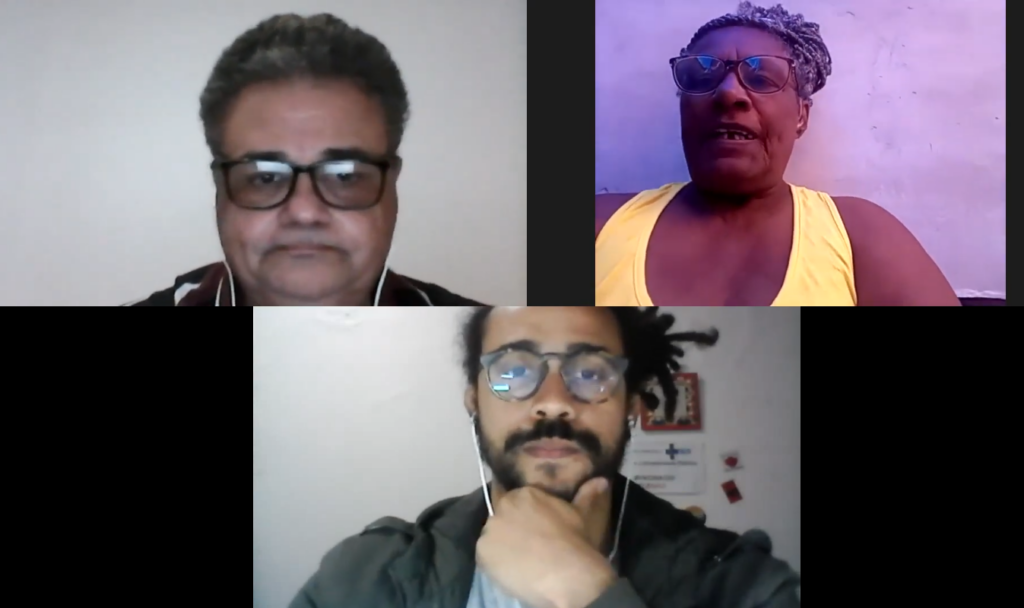 Hugo Oliveira provided the Dashboard with information from S.O.S. Providência, saying that they lack services for the removal of bodies in Morro da Providência. “We had to help families remove the body ourselves. We also had to organize ourselves to help with food and hygiene supplies… We need much greater participation from local leaders in public policy.”

Elisa Maria Campos brought up the issue of information inequality: “Within a pandemic this becomes a health issue as well. It is our biggest challenge, as a capitalist society in the process of becoming an information society. We can’t accept more social inequality”.

Valdirene Militão, from Maré, spoke about the difficulties of fighting the virus in favelas where residents are living in poverty and in very close proximity. “How can we talk about social distancing, if a resident has a house with one bedroom and one bathroom and eight people living in it? Many people lost their jobs and subsequently their homes because they couldn’t afford rent. They even lost their cell phone numbers, without money to purchase phone credits. Then there is the question of nutrition, which is not the same thing for those who live in Barra da Tijuca and Maré! How can people avoid getting sick if they are not well fed? Covid kills, but so do hunger, cold, and depression.” 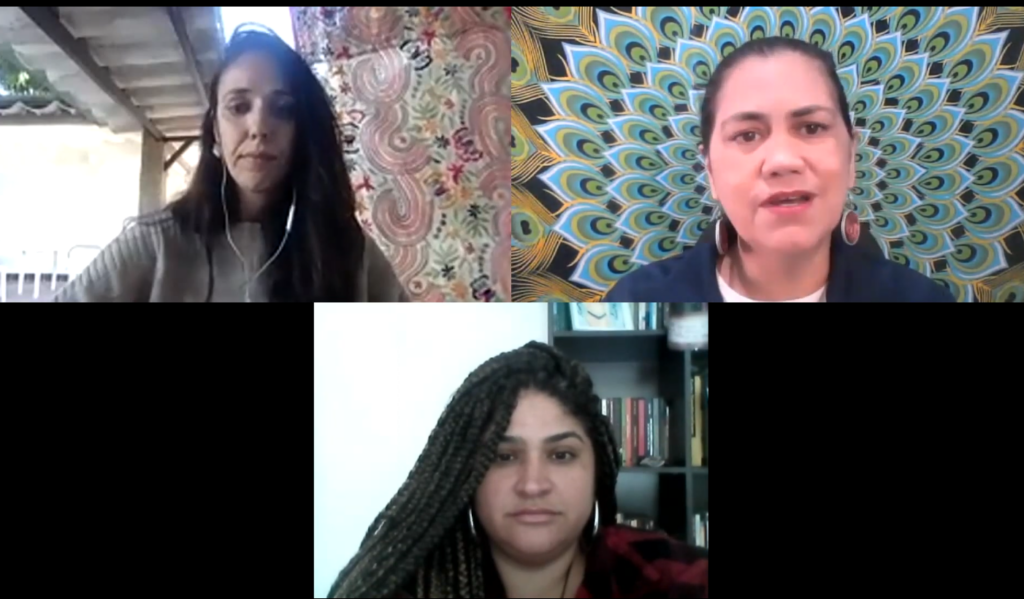 Tatiana Lima wrapped up the discussion by reminding everyone of the role of popular communication in such a context: “Many of us are grieving, either for family or neighbors. Communication, which generally has the job of informing, had to reinvent itself to go to the frontlines, to take the lead. What would have become of the people in the periphery without popular communication?”

Watch the Interactive Live Event Marking One Year of the Dashboard Here:

*RioOnWatch and the Covid-19 in Favelas Unified Dashboard are Catalytic Communities initiatives.