This English subtitled mini-documentary is the latest contribution to our year-long reporting project, “Rooting Anti-Racism in the Favelas: Deconstructing Social Narratives About Racism in Rio de Janeiro,” and also part of a series created in partnership with the Center for Critical Studies in Language, Education, and Society (NECLES), at the Fluminense Federal University (UFF), to produce articles to be used as teaching resources in public schools in the city of Niterói. Follow our Rooting Anti-Racism in the Favelas series here.

Even in the face of the Brazilian Supreme Court (STF) approval of the Claim of Non-Compliance with a Fundamental Precept (ADPF 635), which suspended police operations in favelas in the state of Rio de Janeiro during the pandemic, a police occupation took place in the Viradouro complex of favelas, in Niterói, Rio de Janeiro’s sister city across the Guanabara Bay, on August 19, 2020. At the request of the Municipality of Niterói, that was carrying out construction work in the locality, the Military Police invaded and occupied the territory permanently, installing fixed armored cabins in the communities. 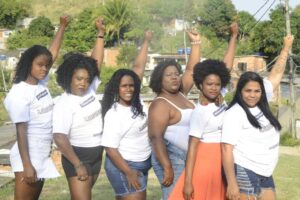 Reports of abuse, truculence, assaults, home invasions, and arbitrary arrests—a recurring pattern of behavior by the Military Police—began to accumulate and the women living in the Complexo decided to act: they made banners printed with #LardeMoradoraRespeite (#RespectFemaleResidentHomes) and hung them outside their homes to dissuade further invasions and abuse. In addition, the black women of Viradouro took back their streets and alleys by playing percussion instruments, reciting poetry, and shouting, “Respect! Respect! The favela is ours! Respect! Respect! These are female resident homes!” A cultural and artistic counter-occupation, in the best “by us for us” style, the movement was initially called “A Gente Pela Gente” (Us for Us) and later called the Viradouro Cultural Artistic Occupation (OCA).

As violations continued, on June 12, 2021, OCA held an event to protest new abuses suffered by residents of Morro do Africano, one of the Complexo do Viradouro favelas. This time, their #RespectFemaleResidentHomes banners, hanging from doors and windows, were slashed or removed by the Military Police during a nighttime operation. 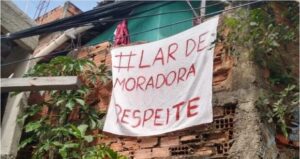 As this occurred, Luiz Henrique Nunes was illegally arrested. Black and hardworking, Nunes was a construction worker at the Complexo do Viradouro, where he also lived. According to his family, the Military Police invaded his home and planted evidence to justify his arrest. His sisters Tainá Nunes and Cláudia Nunes have been doing all they can to prove Nunes’ innocence, but he remains in prison.

Once again, chanting phrases and demanding respect, residents artistically occupied the streets of their communities with protest music and poetry. They nailed #RespectFemaleResidentHomes signs, now made of hard board, on the walls and gates of female residents’ houses, to make a statement of their determination and hoping these symbols of protest would not be torn down again.

Freedom for Luiz Henrique!
The day before yesterday, while the rain fell hard, we received the complaint of an unjust imprisonment here at the Viradouro community. While most families were afraid for their homes, the police carried out an operation that ended with an innocent man being arrested.
We’ve been with this young man’s family since 7am, taking a petition around the outraged community.
The young man works in construction and is hired by the City for a series of works being done inside the community. The entire community claims he is HARDWORKING!
We have the support of @walkirianictheroy and of lawyer @guarino_o_matheus from the @coletivodireitopopular that took immediate action and is offering legal support and guidance to the family.
It is urgent that we discuss the racist logic of police actions that leave the judging in the hands of law enforcers. And whose chosen targets always have black skin.
We shall follow the case closely and keep fighting for this injustice to be righted!
Together we are stronger, and we shall resist!
Thank you @ocaviradouro and @coletivodireitopopular for always fighting side by side with the people!
NO MORE JAILING OUR PERIPHERAL YOUTH!
Reposted from @walkirianictheroy

Besides the cultural and artistic counter-occupation, OCA developed a petition for the freedom of Luiz Henrique Nunes, liaised with Niterói political figures, with the Brazilian Bar Association (OAB), and promoted conversation circles in the community. The “What to Do When Police Approach?” primer, an initiative by OCA and Councilor Walkíria Nictheroy‘s office, was also launched on June 12.

ABOUT THE “WHAT TO DO WHEN POLICE APPROACH” PRIMER
The primer, to be launched during the Cultural Action organized by OCA, is an initiative of the office of Councilor Walkíria Nictheroy @walkirianictheroy (PCdoB/ Niterói). The material’s aim is the promotion of rights during a police approach, considering the systematic cases of irregular police approaches, abuse of power, and complaints of planted evidence in Niterói’s communities and favelas.
DON’T MISS IT!

The event ended with a parade to the sound of drums and a poetic declamation from Morro do Africano to Ponto 53.

Watch the Mini-doc with English Subtitles by Eloanah Gentil Here.

About the author: Eloanah Carolina Gentil is a resident of Morro da União, in Complexo do Viradouro. She is a mother, a black favela woman, a cultural producer trained at IFRJ, a board member of the Center for the Theater of the Oppressed (CTO/RJ), a multiplier of The Magdalena International Women’s Theater of The Oppressed Network, an anti-racist “artivist,” a versatile member of the Madalena Anastácia Collective, and an undergraduate student in administration at Estácio de Sá University.