In response to the murder of a mother and her unborn baby, the Kathlen Romeu Bill is underway, which prohibits abusive “Troy” tactics by the police and establishes guidelines for the use of force in the state of Rio.

The Murder of Kathlen and Her Unborn Son

On June 8, 2021, Kathlen Romeu, a young 24-year-old pregnant black woman who worked as an interior designer, was killed 13 weeks into her pregnancy in an alleged gunfight between the police and drug traffickers in the Complexo do Lins favela, when she visited family in the North Zone of Rio de Janeiro. Witnesses claim that the police were using a tactic known as “Troy,” where officers illegally invade a home to use it as a concealed shooting spot during police operations. Romeu was walking with her grandmother when she was hit in the chest by a rifle shot, fired by police officers from inside a house. On social media, the Military Police denied that there was a police operation in progress and said they were responding to attacks by drug traffickers, a version of events that has been rejected by family and witnesses. 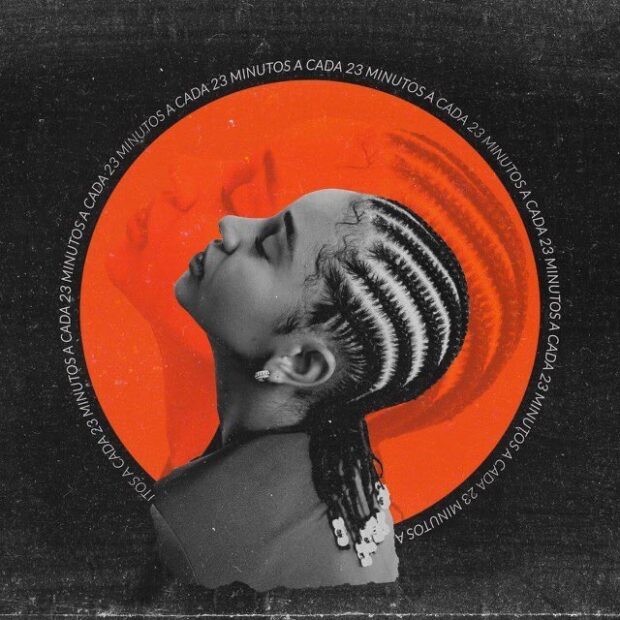 According to data from shootout monitoring platform Fogo Cruzado, nearly 700 women were shot in the Rio de Janeiro Metropolitan Region from 2017 to 2021. Of these, 258 died. Of the women who were shot, 15 were pregnant and eight died. Ten babies were shot while still in their mothers’ wombs and only one survived. The general trend shows police lethality on the rise, even during the pandemic, even after ADPF 635, which requests the review of police practices in Brazilian favelas.

September 16 was the 100-day mark for her murder. During this time, her name appeared in countless spaces. Romeu became yet another symbol of the resistance to extermination policies imposed on favelas. Kathlen Romeu is the name given to the proposed bill that aims to prohibit “Troy” tactics across all favelas in the state of Rio de Janeiro, a war tactic the Military Police claim does not exist. Rights violations in the favelas of Rio de Janeiro take place under the guise of fighting drug trafficking and are purportedly deployed to reduce violence in the city. However, these daily violations of rights cluster around certain locations and bodies: the favelas, the poor, and the black. The proposed bill is the result of the mobilization of grassroots organizations and of the Black Movement in the streets of Rio and in the Rio de Janeiro State Legislative Assembly (ALERJ). 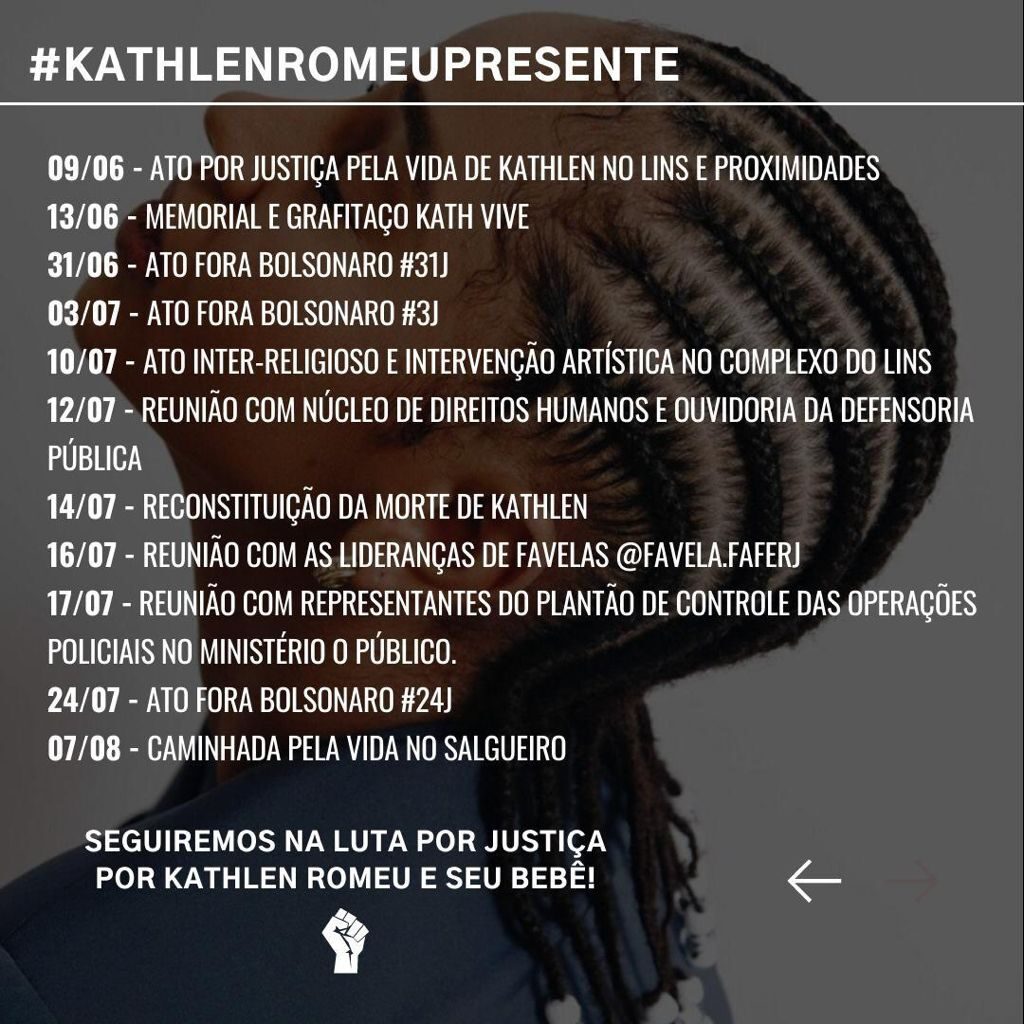 Proposed Bill 4631 was conceived as a result of the efforts of Romeu’s family, her support network of friends, neighbors, and relatives, as well as the office of State Deputy Renata Souza. According to Souza’s office, there was already a proximity between Romeu and the issues that her administration stands for. Shortly after the crime occurred, Romeu’s mother and husband were received by Souza’s office. They sought to transform mourning into resistance, like so many other families. According to Souza’s press secretary, Paula Máiran, the debate for the bill’s drafting also underwent legal, public security, and human rights assessments by evaluators who live and work in favelas, and by the political coordination. The creators of the bill believe that it generates discomfort because it is legitimate and necessary, and that it exists in response to an incontestable demand for a public security policy that guarantees life and human rights.

In recent years, the number of serious reports involving “Troy” tactics employed by the Civil and Military Police have been on the rise. And yet, this military tactic has been used for nearly two decades. According to Gabriel Siqueira, Public Policies Director of the State of Rio de Janeiro’s Favelas Federation (FAFERJ) and a friend of Romeu’s:

“‘Troy’ tactics have always been used. The first operation of this sort was in 2005, which at the time killed the head of the drug traffic in Rocinha; he was known as Bem-Te-Vi. This first ‘Troy’ operation was theoretically legal. The Civil Police rented a house for a short period so they could study and investigate goings-on. This operation was named Trojan Horse, and since then it has evolved, although outside the bounds of legality. I actually believe that the Bem-Te-Vi case was illegal, because the police are supposed to arrest people, not kill them. These days, when this tactic is used, people from the community aren’t aware that there’s an operation going on, they aren’t aware anything is happening. The issue is that when we know there’s an operation in progress, we can call a relative, post in a WhatsApp group what’s happening where, or warn people to take another route or to stay home, depending on the size of the operation. But not with ‘Troy’: the police hide, often invading homes and holding residents hostage, or entering houses where they know a resident has left for work, because 99% of the community is comprised of people who leave for work at dawn and get home late at night. So, they wait for people to leave in order to enter their homes and hide. When the traffickers set up a new point of sale for drug deals or when someone passes by who the police believe is a criminal, they wait for the right moment and shoot. These operations are illegal and ineffective. On the contrary, they are designed to kill, despite the fact that in Brazil there is no legal death penalty. In any democracy the world over, people should be arrested [and tried].”

Proposed Bill 4631 is thus a milestone in the fight against this deadly tactic. It defines what a “Troy” tactic is, criminalizes the practice, and holds police officers that employ it accountable. According to the bill, a “Troy” tactic is “the use of police-organized ambushing, where officers hide within a conflict zone in order to take suspected criminals by surprise, by employing firepower against specific targets and almost always resulting in fatalities, including residents. The systematic use of this practice has been denounced by human rights organizations and democratic institutions for years.” The proposed bill describes how “Troy” persists as a “violation reported systematically by residents of various favelas,” and goes on to say:

“Very often, according to reports by residents, officers occupy properties within a conflict zone against the owners’ wishes, waiting for the right moment to launch an attack against suspects, in a complete affront to what is expected of a police institution committed to the principles and values of the democratic rule of law. We cannot stress sufficiently that, when there is the rule of law, the conduct of police forces, including during police operations, should be in accordance with the law as well as based on rigorous planning, evidence and opportunities identified, which preserve the life and physical integrity of both public agents and the population of the territory where these interventions take place.”

This tactic is not provided for in any service order or operational guideline from the Civil or the Military Police state departments. Thus, it is classified as an abuse perpetrated by the agents and a breach of the constitutional principle of legality, not to mention the violation of international treaties and protocols of which Brazil is a signatory. The rights to life, liberty, and personal safety provided for in Article 3 of the Universal Declaration of Human Rights (UDHR), in Article 6 of the International Covenant on Civil and Political Rights (ICCPR), and in Article 4 of the American Convention on Human Rights (CIDH-OAS) are systematically disrespected by the Brazilian government. This view is shared by the General Ombudsman of the Public Defender’s Office of the State of Rio de Janeiro, Guilherme Pimentel:

“The problem with ‘Troy’ tactics has officially appeared in hearings held by this office since, at least, 2018, in the Favelas for Rights Circuit Report, a project that involved visiting favelas to collectively listen to the communities on the main violations of rights committed by security forces. The Circuit Report emerges within the context of the federal intervention in public security. Already at that time, [there were reports of] ‘Troy’ tactics—these ambushes mainly set up by Military Police officers who hide in abandoned or occupied homes, buildings, green areas, unlit areas, alleys, businesses, and churches—in order to shoot and kill people they consider suspects. This is one of the most common violation reports from favelas… An ambush operation with the objective of killing targets is a violation of the entire Brazilian legal process and system.”

“‘Troy’ tactics are a practical manifestation of the Brazilian saying ‘A good criminal is a dead criminal.’ Officers identify suspects, analyze them, try them, condemn them, and apply the death penalty, which is prohibited within the Brazilian legal system. Unfortunately, these cases only surface when the victims are innocent. However, the innocent only die because part of society approves of this practice when the target is a person who has committed some sort of crime. The problem is that this summary judgment will always involve mistakes. If we want to protect the innocent, we need to reject this practice against anyone, given that suspects or people who have committed some sort of crime must go through due process to prevent or reduce the chances of injustices being committed, even more so with irreversible injustices like executions.

“I would have preferred that Kathlen Romeu not be turned into a cause. I wanted her to be here with her baby, and for us not to have to talk about any improvements to the communities. Unfortunately, her life was transformed into a cause, hers and her child’s. I think that the history of Brazil is an uninterrupted tale of violence against Afro-Brazilians and against its indigenous peoples, that this still goes on for a gigantic segment of our population, and that this hasn’t stopped even with so much progress. Romeu and her baby were murdered by the Military Police, by the State. There is no doubt in our minds. Over these last 100 days, not a single one goes by where we don’t think of this cowardice, where we’re not outraged. A point is reached where emotions run high and it’s very difficult. But we’ll go on until the investigations are finalized. In FAFERJ’s opinion, the process will move towards a civil condemnation of the State. The State must be held accountable for what’s going on and for what happened to Romeu. The police have to be in the communities to protect our lives, our freedom, and our safety, not the other way around. For this reason, her family, FAFERJ, the Black Community, and the office of State Deputy Renata Souza, along with Colonel Ibis, filed the Kathleen Romeu Bill. It’s very important because it describes what a ‘Troy’ tactic is, which the police claim doesn’t exist. It also criminalizes and holds accountable any officers involved as well as their superiors. It’s a comprehensive bill.”

Proposed Bill 4631 establishes a basic directive that prohibits this abusive practice as well as minimum guidelines for the use of force and firearms within the territory of the State of Rio de Janeiro. The bill aims to ensure that the constitutional principle of dignity of a human person is respected, as well as to establish the very legitimacy of police activities which, at all times, must be a reflection of the democratic rule of law.

The personal safety of the population is the goal of public security. It should avoid risks to life and guarantee the protection of property. Thus, police operations that violate life and the physical integrity or property of any citizen are unconstitutional. The distinct approaches employed by security forces in the favelas compared to wealthy neighborhoods in the city signals a violation of the principle of equality and of non-discrimination based on origin, class, race, or color.

About the author: A resident of Lins, in Rio’s North Zone, Alexandre Cerqueira has a degree in International Relations and develops primary education projects in favelas using photography and video production as language tools.