For original article by Marsílea Gombata in Portuguese in Carta Capital click here.

It could be New Year’s Eve in Búzios: young people, well dressed, girls in skimpy clothing and jewellery who love to be tanned and wear natural makeup. But we are in Pavão-Pavãozinho, a favela in Rio’s South Zone which up until recently has been the stage for confrontations between police and drug traffickers.

Since the arrival of the Pacifying Police Units (UPP), the firing of heavy arms and baile funk have given way to other sounds and other people. The asphalt (formal city) has invaded the favela. The current fashion in Pavãozinho (and also in Vidigal, Rocinha and Ladeira dos Tabajaras) is to hold parties for the playboys of Ipanema and Leblon. Entry costs between R$30 and R$120, generally not an option for residents of the favela, and those taking part pay for the privilege of dancing close to the incredible views of Rio de Janeiro. ‘Mangueira, your setting is beautiful,’ says the old samba song, and is adaptable to most of the city’s hillside favelas. 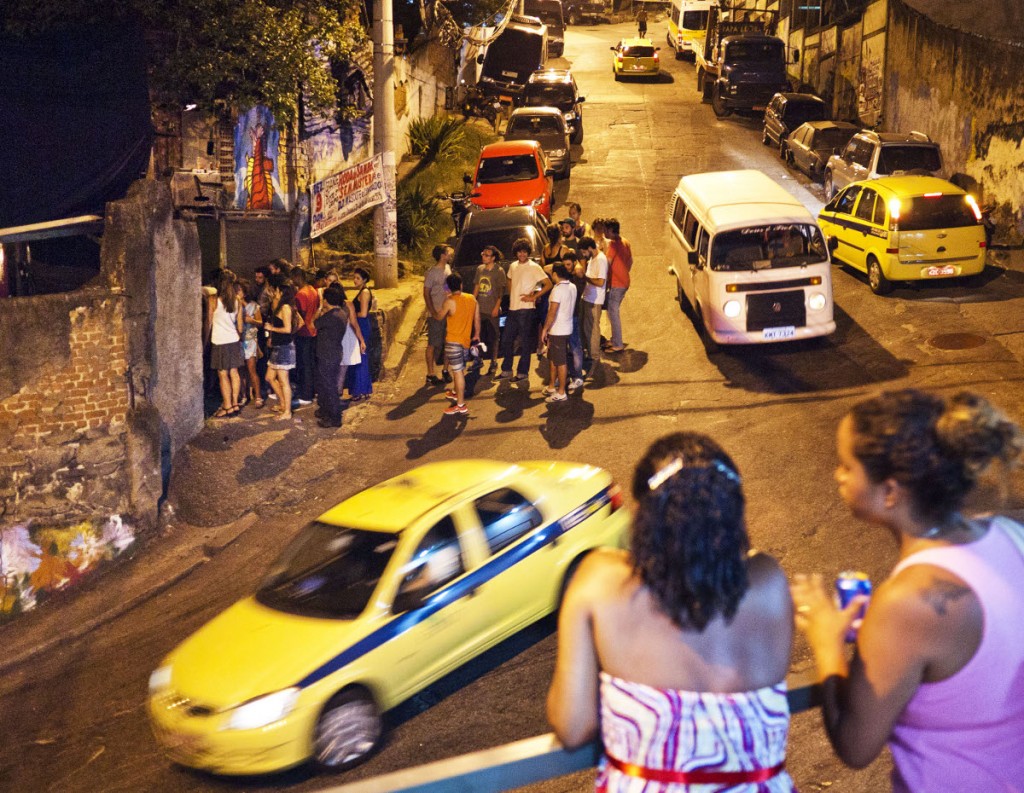 “The favela pacification program made the ‘playboyzada’ start attending samba school workshops in the communities. From then on, events have started popping up in these places,” explains Cesar Batas of Rio Prime production company, an organiser of nightclub parties in South Zone. The business, created in 2009, has been exploring this new opportunity and promotes events in Ladeira dos Tabajaras, Copacabana.

The parties happen, for the most part, where baile funks previously reigned and bring with them many different sounds like hip-hop, soul music, samba and jazz. Despite the change of clientele, the parties cause the community the same disturbance as before: sleep deprivation caused by deafening music until dawn. In some communities, noise has caused resident protests and demands for a law of silence. To little avail, in Vidigal for example, the Oficina do Jô parties, attended by gringos and beach side residents, don’t stop before 5am.

“You can’t have baile funk, but you can have this,” protests 29 year-old Thais (who does not want to disclose her surname). Born and raised in Vidigal, according to her the local rodas de sambas must end by 11pm. “To say the problem with the baile funks is the noise would be a lie. The difference is that these parties are put on for a more elite group, everything is allowed.”

Maiara Yamada, a 20 year-old student who frequented the favela parties, mocks: “The complaints about funk music are different. For them, it isn’t convenient to have a baile funk where the community reasserts its space. I have to ask myself if this UPP pacification is for the residents here or those living below.” 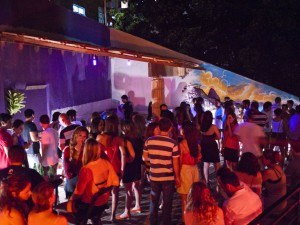 With a growing, richer audience (in Vidigal, the average number of attendees is 600 and in Tabajaras, a party can attract upto 1,300), the parties generate money for the local community. The street vendor, Juarez Souza, who sells water and chewing gum on Rua Saint Roman, one of the entrances to Pavão-Pavãozinho, welcomes new visitors to the hill where he has lived since 1994: “These parties are great, they bring new people, new friendships and there isn’t violence.”

On the hill going up to Vidigal, a bar has become a Japanese restaurant. Popular local beer brands have been replaced by imported Stella Artois and Heineken. The Fênix Sushi Bar symbolises a change in the clientele profile: locals have gone, “tourists” have appeared.

“The big question is: up to what point is a party more for us and less for them?” asks the journalist Nuno Virgílio Neto during a visit to the new Japanese restaurant. “It’s this which we don’t stop and think about, but we should.”

The new sushi bar is a pit stop on the way up to Vidigal. For those who will still take on the Oficina do Jô dance floor, the place is synonymous with warm up parties. For those who can’t pay the R$40 entrance price or R$8 for a beer, the night stops there, with a can in hand and just listening to the sound of the party. Some events offer tickets with a price which residents can afford, but they are rarely promoted. “We don’t get told about these cheaper tickets,” claims Maria Lúcia Bastos, a Vidigal resident who works as an accounts analyst. “A party which costs R$40 is designed precisely so that members of the community don’t attend. It is discrimination against people here, in our own area.”

Talking about possible resentment amongst residents, party host Nina Franco says: “I’ve thought about this a lot. But we always talk with the residents associations, we invite neighbours. At some parties, when people turn up and say they are from the community, we try to offer them a fair price for entrance or give them a ticket. There has to be some flexibility, I mean, technically we are invading their space.”

Danilo Cymrot, who studies the marginalisation of funk, notes that the wave of parties in pacified communities reveals a subtle movement in the policies of the UPPs. “This trend clearly demonstrates the invasion of wealthy outsiders in areas of the favela, which the middle class have already taken over for leisure. You are letting young people from more privileged areas have what young people from the communities had and no longer have,” he reflects. “For me, it only reinforces the notion that the criminalisation of funk is a selective process which hides the criminalisation of the population identified by this musical genre: black, young, from the favela.”