“We are here today because the Prefeitura (City government) is putting psychological pressure [on the residents of Vila Autódromo],” explained Lucia Cerqueira, a representative of the Catholic Church community organizing group Pastoral de Favelas in Jacarepaguá. The Pastoral and others from a network that includes public defenders, housing rights organizations and journalists, responded to  an urgent request on Monday, March 4th to mobilize in light of the “battalion” of city employees who have been ceaselessly going door-to-door attempting to convince residents to sign up for the “Parque Carioca” resettlement housing currently under construction.

Vila Autódromo is a community with a long history of resistance to arbitrary and unjust removal attempts, a struggle that brought about 99-year concession of use rights in 1994 from the State government. Now that the Olympic Park is going to be built nearby, the city government is hoping that glossy brochures will entice residents to move out. Although the City government characterizes the removal of Vila Autódromo as inevitable, Alexandre Mendes, a lawyer formerly in Rio’s Public Defender’s Office, explained that the community is “judicially secure” and that residents have no obligation to accept the government resettlement.

Canvassers tell residents they are simply there to perform a “social registry” of Vila Autódromo in order to register family and property information. Residents however view this as an intimidation tactic, intended to coerce families into accepting the resettlement housing with a limited understanding of their legal rights. The tone of these visits—which include personal questions and an intrusive survey of property—is that if residents don’t take advantage of this resettlement “opportunity,” they risk losing everything. As one resident explained sardonically, “it’s good for you to leave, accept their game, or your house will be knocked down, your house will fall to the ground… accept their game or lose everything!”

For over a week, the Prefeitura sent dozens of city workers to Vila Autódromo, eagerly providing residents with the colorful pamphlets promoting the “Parque Carioca condominium,” scheduled for completion in February 2014. They were trailed on Monday March 4th by a vocal group of residents and supporters, who informed families of the right to remain in their homes, if they so chose, and urging them not to sign any contract without complete information.

City employees refused to answer any questions about the purpose of their extended visit to the community. “Just wait for the boss, Pedro Paulo, he will answer your questions.” On Thursday, federal congressman Pedro Paulo, dubbed “the right arm” of the deputy Mayor of Jacarepaguá, gruffly referred me to the communications department of the deputy Mayor. “I am not allowed to say anything,” he told me.

Verbal altercations arose in several instances, as Prefeitura coordinators grew increasingly frustrated by the impromptu community resistance that was hampering their work. Inalva, an outspoken resident and one of the directors of the Residents’ Association, followed city workers to each door and cheerfully encouraged people to build more floors on their home, raise their kids, and disregard the city’s propaganda. City officials started shouting and getting increasingly defensive – “We are just talking here!” – and insisting on their own long-term relationships with residents – “I’ve known this man since I was young, isn’t that true?”

Several minutes later, one of the city coordinators began insulting the consistently calm Inalva, ordering her to “go look for a tank to wash clothes!” As the altercation became more aggressive and less coherent, the coordinator started screaming at community organizers, calling Inalva a crazy woman and trying to justify the City’s presence there.

Lucia of the Pastoral de Favelas, explained that the City often contracts unemployed people from other communities, not currently at risk of removal, in order to do the city’s door-to-door work in Vila Autódromo, a tactic that damages attempts at mass mobilization. “In other words, they use the poor against the poor.”

Furthermore, residents expressed several concerns about the “Parque Carioca” resettlement housing and the manipulative ways in which it is being advertised to the community. “I am not a victim,” exclaimed an elderly resident of Vila Autódromo, referring to the patronizing manner in which the Prefeitura promotes the community’s resettlement. 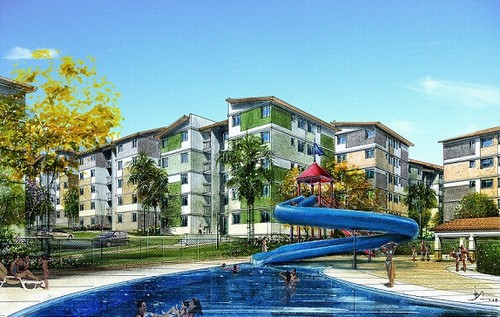 “Parque Carioca” housing is being pitched to the community through pamphlets showing stylized and glamorous apartments. The Prefeitura also took coachloads of Vila Autódromo residents to see a fully furnished and decorated model housing unit—“an apartment from a novela”— one onlooker remarked. In reality, Minha Casa, Minha Vida housing units are small (40 square meters for 2 bedrooms), impose numerous artificial rules and additional expenses on residents, and are infamous for poor construction and maintenance, not to mention depriving residents of the qualities of the community-based lifestyle many enjoy and benefit from.

Second, community organizers and lawyers are concerned about families signing a resettlement contract without full understanding of the complicated clauses and restrictions. For example, residents are prohibited to sell, rent or lend the housing unit for ten years; and the home can be taken away within a few months if families default on payments. Alexandre Mendes, who is currently providing legal assistance to the community, explained that the City government “disseminates that the person is going to receive a house with a title, and that the person is going to be the owner of that house, but this is not the truth.”

Finally, residents are concerned about the expensive costs of the “Parque Carioca” condominiums. One resident, Tereza, estimates that the cost of amenities—gas, light, water—and condominium fees and maintenance—pool, volleyball court, soccer field, social area—could total around R$500-600 a month. Tereza alluded to an important contradiction in the process of resettlement: Those families in Vila Autódromo with more financial means and the ability to pay “Parque Carioca” costs would prefer to stay in homes they have invested in for years; in contrast, those families with fewer financial means are considering accepting the housing option, but will likely be unable to afford the costs and will risk defaulting.

Residents assert that the City wants the community to be relocated not because of the neighboring Olympic construction, but rather as a “troca de favores” (exchange of favors) between the Mayor and powerful real estate developers who will build luxury condominiums on the site as part of the “post-Games Legacy“. Claudio Silva, a long-time resident and Physical Education teacher, explains solemnly that, to the developers, the continued presence of Vila Autódromo will devalue these investments. He argues that sport—“something that Cariocas love!”—should not bring about so much pain for these families. “We are not against mega-events, we are not against national development. We want the Olympics to happen and Rio de Janeiro to receive a lot of tourists. But the people shouldn’t suffer [so much] for this… We are paying such a high price for an event that lasts so few days,” he pressed.

Over the next few weeks, public defenders and community organizers are planning meetings and door-to-door visits in order to guarantee access to full information. They want residents to understand their legal right to remain in Vila Autódromo
and ensure they are not pressured by colorful pamphlets, complicated legal contracts, or the physical presence of the Prefeitura in their homes.

Another goal of the Vila Autódromo advocates is to strengthen and advocate the community’s alternative upgrading plan, developed with planners and architects from Rio’s two best known universities and which shows that, at approximately a third of the cost of relocation, the community’s upgrading would save public funds and does not interfere with Olympic-related construction. With only 11 roads, most quite wide, large lots and generally well-built homes, the community’s upgrading is economical. “We want to be part of the social legacy [of the Olympics],” Claudio explained as he and other residents called for development and investment in Vila Autódromo, as opposed to neglect or coercion of legal rights. “We want respect from the City as Brazilian citizens.”

Community organizers know that they have the law on their side and are working to keep communication channels open so that things don’t end in an intimidation game. Although it will be a long battle, it is one that residents have fought and won before.

“My dream is to stay here,” said Tereza said with tears in her eyes. “I want to live in Vila Autodromo until the end of my days.”