The Roots in Movement Institute in Complexo do Alemão had a busy Saturday on May 7, discussing “The Health and Sanitation We Want” during the first meeting for Alemão’s Popular Action Plan.

Organized by the Roots in Movement Institute, the discussion engaged Wagner Souza, Alemão resident and Community Health Agent, and Stelberto Soares, Civil and Sanitary Engineer from the National Public Health School. The roundtable was mediated by Alan Brum Pinheiro, one of the founders of the Roots in Movement Institute and coordinator of the Center for Research, Documentation and Memory of Complexo do Alemão (CEPEDOCA). The event was also attended by other health, sanitation and conservation professionals, as well as local activists. 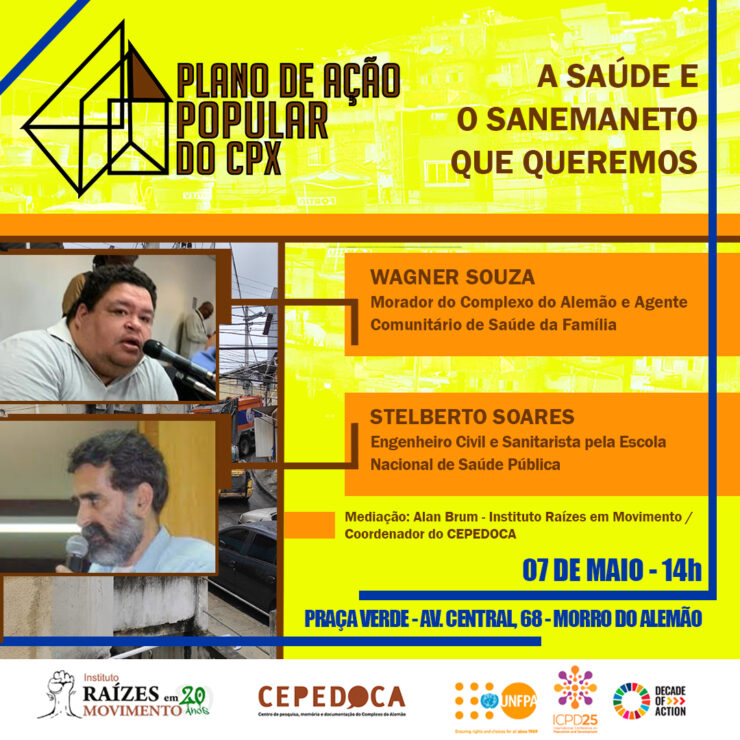 This was the first of five different-themed meetings—taking place between May and June of this year—aiming to raise crucial issues for Complexo do Alemão. Topics such as basic sanitation, health, education, culture, women, and youth have been in the spotlight, with different local organizations promoting the roundtables. Amassing material from these five preparatory meetings, the Complexo do Alemão Popular Forum will be held in August with the purpose of establishing a public policy agenda to engage 2022 general election candidates.

Alan Brum kicked off the meeting reflecting on the history of how health and sanitation in favelas have been discussed and neglected for years. After his opening speech, the Roots in Movement Institute coordinator introduced the guest speakers and gave them the floor.

Soares began by highlighting the potential of strategic and intelligent management of public resources and gave a historical overview of the issue. He recalled the struggle for water between the residents of Complexo do Alemão and the Coca-Cola company, whose factory was located on Estrada do Itararé, one of Alemão’s main roads, between the 1970s and 1990s. The company used up a considerable amount of water that could have served the community but the favela’s thousands of residents were not prioritized. Soares mentioned that the construction of the water tank on Rua Aristoteles Ferreira was disputed and that access to its water by locals was only guaranteed through community organizing. For the sanitary engineer, it is no coincidence that “no sanitation policy has turned out as originally planned since 1976… the matter is not technical, but political.” To this day, this historical government neglect affects every single aspect of basic sanitation: public health, water, sewage, garbage, and drainage. 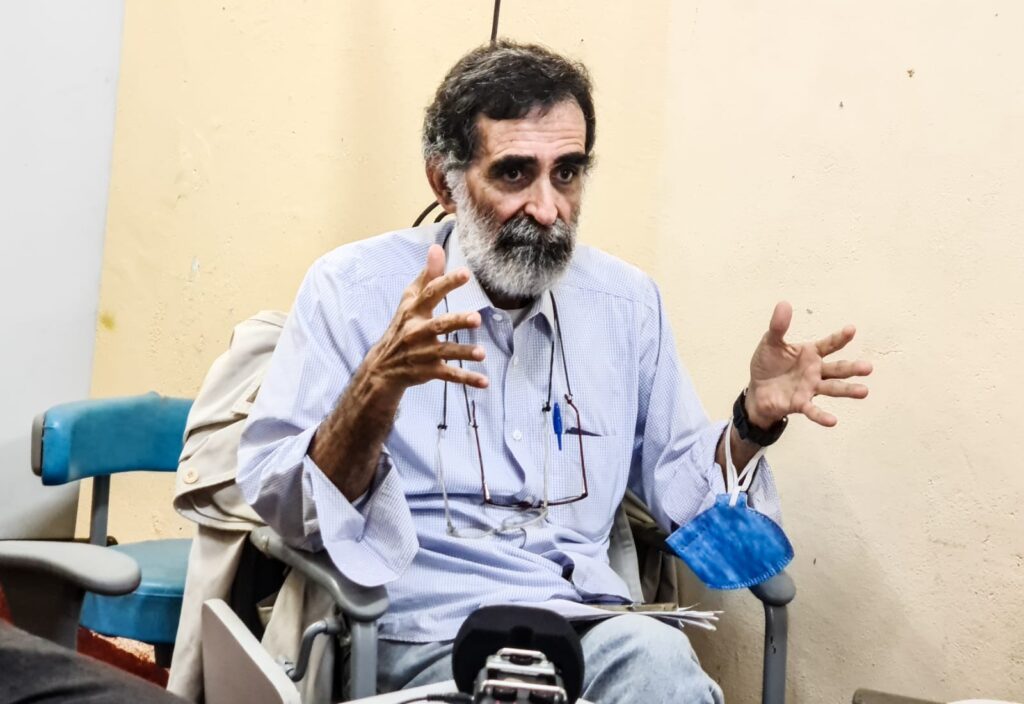 Soares also drew attention to the proposed bills currently under discussion. Now in the legislative process, Proposed Bills 1907/2015 and 4546/2021, drafted by the executive branch, are deemed a “new hydric rule.” According to Soares, the most salient point of these proposals is the so-called “onerous transfer of water resource use.” This mechanism would allow private companies granted the use of bodies of water such as lakes, rivers, and dams by the State the possibility of selling their unused quotas of water. For Soares, popular mobilization is crucial to deter this “water market” and prevent the basic right to water from being traded.

Next, health official Wagner Souza reflected that “public policy needs to be thought of collaboratively,” and that community organizations should prioritize the participation and empowerment of residents. Souza presented a historical panorama on family health in Complexo do Alemão, highlighting the resilience of local health officials. He said that community agents are frequently absorbed by bureaucracy and routine: because of this, they often fail to perform their duties as they should. He highlighted that “the community agent is a critical role and not simply a health bureaucrat.” 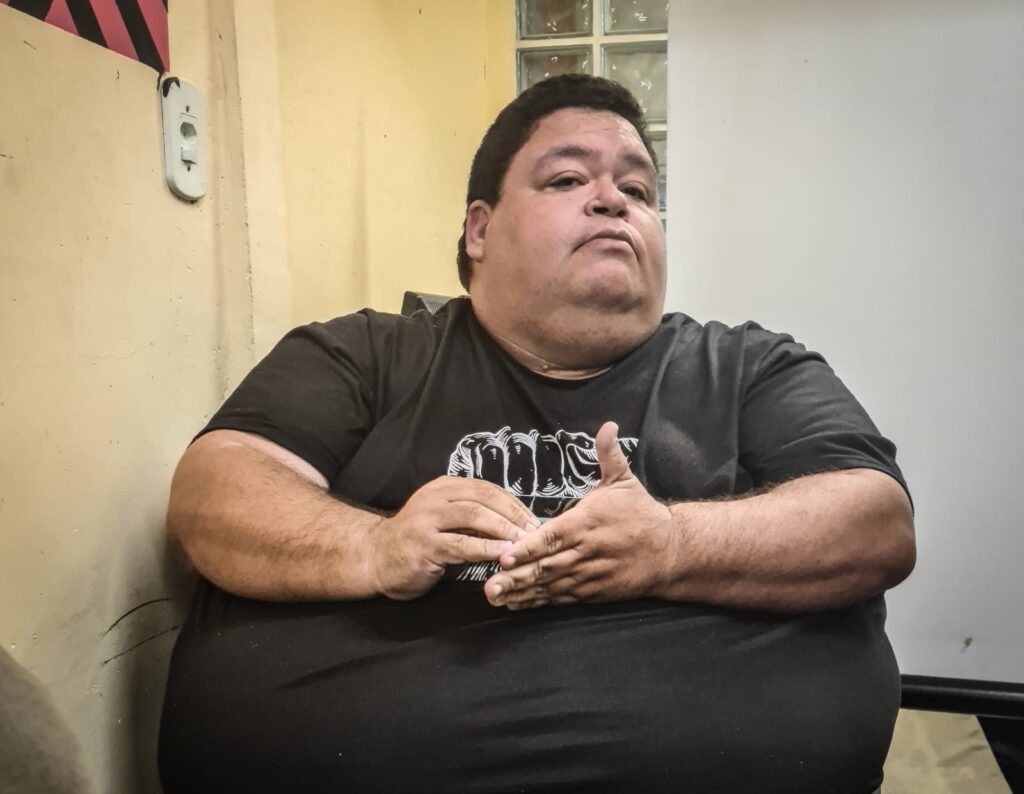 In this respect, former mayor Marcelo Crivella‘s administration was heavily criticized. Souza and others spoke of how the Family Health program was dismantled during Crivella’s administration. For him, this dismantling impacted directly on the mental health of professionals who were overwhelmed and working in non-specialized and often unclear roles. “It’s the health professional/patient bond that makes the Family Health program work; this constant switching of professionals jeopardizes that bond.” According to Souza, to this day there is a significant deficit in the numbers of all types of health professionals, with a particular shortage in dentistry and mental health. The coronavirus pandemic was also strongly addressed during the afternoon’s discussions. Locals explained how the pandemic was a major setback and shared strategies they created to be able to carry out their work.

After the guest speakers, professionals and residents emphasized the need for local leaders to attend meetings like these as a way to contribute to the struggles of different spaces within the favela and pressure the government for public policies. In this manner, the Popular Action Plan is being developed as a community effort, as a tool that aims to bring together important agendas for the region: to create a forum and call for a commitment to residents’ demands from the 2022 election candidates.