For the original in Portuguese by Cecília Oliveira on Arma Branca click here. 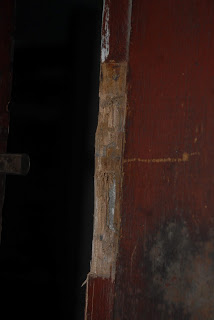 Does citizenship have a post code? This question may seem absurd for some, yet spot-on for others, and it is what favela residents are repeatedly asking about state powers.

Maré, a group of favelas situated between the Avenida Brasil and Linha Vermelha, two main highways in Rio’s North Zone, has been the target of six police operations in the past month. Residents are experiencing what they call “Pre-UPP Syndrome”, or TPP (Portuguese acronym).

Last Thursday May 2nd, residents of the favelas Parque União and Nova Holanda faced yet another operation, in which BOPE, the Shock Battalion, BAC (dogs unit) and GAM (air support unit) employed spectacle and force to seize three firearms (one calibre .45 and two 9mm handguns), ammunition, drugs (167 rocks of crack, 280 tubes of cocaine, 300 grams of white power, 410 bags of marijuana, 37 blocks of marijuana, approximately 1kg each) and R$381 in cash.

This unremarkable result, disproportionate to the force used in the operation, was achieved through the violation of citizens’ rights. 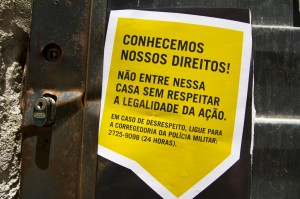 Such tactics have long been criticised, yet they continue to be used, revealing the unequal reach of the democratic state of law. In an attempt to prevent this now commonplace situation, civil society organisations and residents associations joined forces to confront the state’s violent practices, with the support of Amnesty International.

About 50,000 information packs have been distributed to residents in Maré to ensure they know their rights if they are approached by police officers – in the street or at home. As well as advice on how to avoid police abuse, the packs include signs for people to stick on their doors, with the caption, “We know our rights! Do not enter this house without respecting the law.” At the time the campaign was launched, a ridiculous article in the Globo newspaper even said that the campaign “makes the police’s job difficult.” 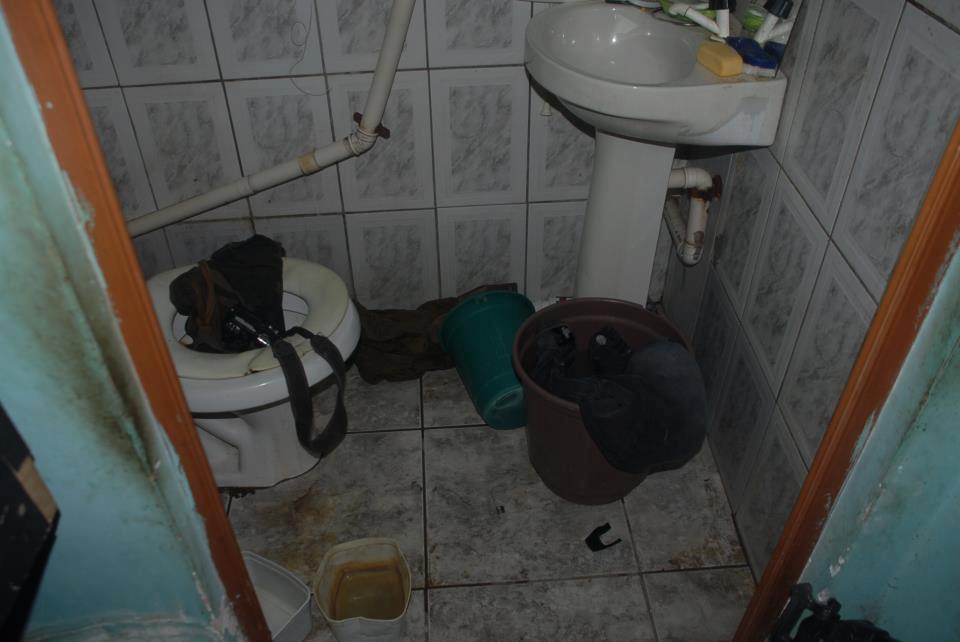 “What have I lost? What’s the value of the things I have lost? It’s the value of a life of work and my dignity. That is the price.” Bira Carvalho, who has lived in the Nova Holanda favela for 40 years, was devastated when he arrived home to find his house had been broken into by the police. “They destroyed everything in my house,” he explained.

Bira is a well-known photographer. He was the winner of the “Making a Difference Prize” (Prêmio Faz a Diferença, together with the Imagens do Povo team), and has published books. “I will keep my head up, but if I were the governor I would be ashamed,” he said, as he prepared himself to denounce the abuses.

The photographer has participated in many exhibitions, including “Olhar Cúmplice” at Caixa Cultural in Rio de Janeiro; “Sport in the favela” at the Banco do Brasil Cultural Center in Rio de Janeiro (both of which were also shown in the Palácio do Planalto, the government’s palace in Brasilia in 2008); “MostraBelonging: an inside story from Rio´s favelas” at Canning House in London in 2007; and a multi-media show at Recife State Museum in 2011. 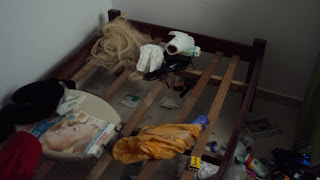 The same happened to public school teacher, Bruno Paixão, who arrived home to find his house turned upside down. According to article 5 of the Brazilian Constitution, “the home is the inviolable refuge of the individual, and no one may enter therein without the consent of the dweller, except in the event of an offense being committed or disaster, or to give help, or, during the day, by court order”, yet during police operations it is not uncommon for this to be violated, as officers, under orders from their superiors, enter people’s homes during any time and in any situation, often justifying it through “collective warrant for search and arrest.”

“A search warrant must specify the house, its number, everything described and distinguished. There cannot be a general and vague warrant to enter an undetermined number of people’s houses. That is illegal. Can you imagine that happening in a luxury condominium? The prospect is unimaginable, isn’t it? Meanwhile, that is what happens in poor neighbourhoods. To paraphrase Adorno, the state acts arbitrarily with those who have no choice,” explains Patrick Mariano Gomes, Master in Law, State and Constitution, and member of the National Network of Popular Lawyers (RENAP). 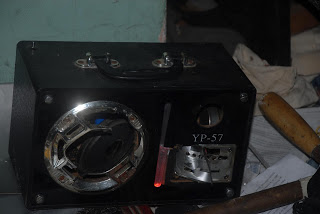 According to Guilherme Nucci, in his book The Code of Criminal Procedure, a legal warrant must be correct and specific. “An essential consequence of the constitutional principals, which protect private property, as well as the individual’s private life and integrity, should be that search and arrest warrants are issued by a magistrate, that they have clear objectives, and are for specified suspected persons. Generic judicial orders that give agents of authority freedom of choice and options of which places to invade and search cannot be permitted,“ he describes.

For the law expert, use of collective warrants, without specific details of the homes to be searched, is an abuse of authority by both the issuer and the executer of an indiscriminate warrant. “The law demands concrete reasons for someone’s house to be violated and for body searches to be carried out, not permitting generic orders which give broad access anywhere. In exceptional cases, a warrant for an undetermined search may be issued, but this must have a specified aim or place. An example of this would be a report, based on previously collected details, that there was evidence of a crime inside a house on road X, at number Y, though the resident was unknown. In this case, the police could investigate the house, without the names of the inhabitants, though having specified the property. Vice-versa, they could know the name of the person, though not exactly where they live.”

Bira and Bruno’s houses were both broken into, which would only be legal in the case of a flagrante delito–catching a crime as it happens–or to save someone from a disaster or a fire.

A Press Release from BOPE

The Special Operations Battalion (BOPE) began a Military Policy Inquiry on Thursday afternoon, May 2nd, to investigate the circumstances in which the possessions of photographer Bira Carvalho were rifled through and destroyed. Residents sent the report to the 22nd Military Police Battalion (Maré) and immediately brought to the attention of the BOPE commander. Nearly 300 Special Operations officers participated in the operation.

In communication with the Battalion’s Press Officer, I was informed that BOPE did not have a warrant.

UPDATE: Since this article was published, Maré residents were recieved by Rio State Assembly’s Human Rights Commission, the Civil Police have launched an investigation and the Public Defendor’s Office has filed a lawsuit calling for compensation.

This article was written by Cecília Olliveira, and published on May 6, 2013.
Translation provided by Charlotte Livingstone. This article originally appeared on Arma Branca. in Policies, Translated by RioOnWatch, Violations