For the original by Sarah Monteiro in Portuguese in Jornal Extra click here. 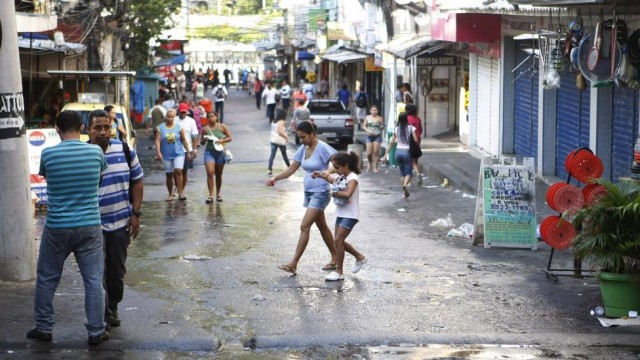 Basic sanitation, garbage collection, education and health are considered the basics for survival in any place. In Rocinha, however, residents say these are being overlooked for something that shouldn’t be a priority: the cable car. Architect Luiz Carlos Toledo, responsible for Rocinha’s Plano Diretor (master plan), approved in 2007, agrees. The equipment wasn’t antipicated in the initial project, which was prepared with the assistance of the community, and according to Toledo, it will not bring any great benefit to the community: “The proposed transportation, besides being more expensive as a result of its complicated technology and importation from France, will be expensive to maintain. It’ll harm local businesses by removing foot traffic from streets. One solution would be the installation of a tramway, which uses Brazilian technology, has already been put into service in other areas with great success, and will adapt better to the slopes of the hillside.”

The lack of basic sanitation is one of Rocinha residents’ main complaints. A group has organized to send a letter to the government questioning the necessity of the cable car. José Martins, a member of the groups Rocinha Without Borders and Rocinha 100% Sanitation, said the population is not being heard: “In a meeting in 2011, the idea of the cable car was presented and the residents present were unanimous in rejecting the proposal. They asked for basic sanitation. Two years later, we are informed through the media that the project will go ahead, even though it is against the will of the people who live here.”

José Britz, president of the São Conrado Residents Association (Amasco), echoes his view, saying: “We suffer because of the lack of trash collection and the community’s structure. It generates a negative effect on the neighborhood. The construction of the cable car would only benefit tourism. Is this in the interest of the community as a whole?” [São Conrado is the wealthy beach-front neighborhood below Rocinha.]

However, Leonardo Rodrigues, president of the Rocinha Residents’ Pro-Improvement Union, says those living at the top of the community view the project favorably. He gives examples, saying, “The elderly, wheelchair users, and people who need to move around with urgency will benefit from it.”

Ocimar Santos, president of Rocinha.org, confirms that opinions are divided: “For some people, the cable car will make a positive difference; for those who participate in social movements, the project is a waste of capital.”

The State Public Works Company (Emop), linked to the State Secretariat of Works and responsible for the project, clarifies that the construction is included in the federal Growth Acceleration Program (PAC). Besides the cable car, which would have six stations and two lines and connect with the metro, there will be sanitation works, provision of sanitary sewer systems, widening of roads, and relocations of families living in a risk area. Federal and state government’s investments will total R$1.6 billion. The deadlines for completion are yet to be set. The Secretariat of Works states that improving accessibility is one of the pillars of the Growth Acceleration Program, and that this project is a request from many Rocinha residents.