For the original article by Ciro Barros in Portuguese in Pública click here. 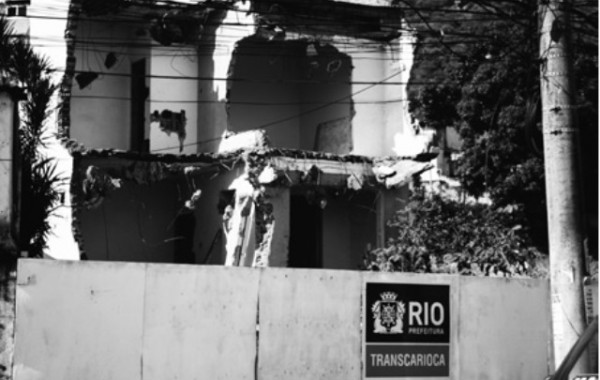 This Saturday, the Rio Popular Committee for the World Cup will host a football championship between members of communities threatened with or already undergoing eviction.

At 9am on Saturday June 15, an event promoted by the Rio de Janeiro Popular Committee for the World Cup and Olympics intends to oppose the enthusiasm that circles the arrival of the Confederations Cup.

Seven hours before Brazil debuts against Japan in the FIFA competition, a “preview” for next year’s World Cup, another ball is going to roll in the Quilombo da Gamboa (Rua da Gamboa 345) in the central zone of Rio. It is the “Popular Cup–Against Removals,” a football tournament between communities that are suffering from evictions in Rio, from communities that have already been removed to communities that, at some time in the preparation for the mega-events, have suffered threat of removal.

“We chose the 15th because it’s the day the Confederations Cup opens and we are in search of more creative demonstrations,” said journalist Paula Paiva Paulo, member of the Popular Committee. “We already do quite a lot of protests, they are important, but we wanted to do something a little more creative.” The Committee is going to distribute materials with information about the communities to those attending the event. 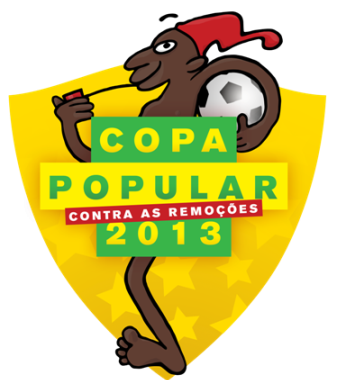 Also on Saturday, the World Cup’s popular mascot, Saci, will be launched. In contrast to the ofﬁcial mascot of the Cup–that can only be used by vendors and businesses authorized by FIFA–Saci will be available as copyleft for businesses, especially more modest ones, to use at their will.

Up to now, there are ten teams confirmed for the Popular Cup: there will be two male teams from Morro da Providencia, a community located in the central region of Rio; one from Muzema, a community in the West Zone of the city; one from Estradinha, located in Botafogo (South Zone); one team from Indiana, a community in the Tijuca neighborhood; and another from Vila Autódromo, in Barra da Tijuca. There will also be four female teams, from Providência, Indiana, Santa Marta and Salgueiro.

Roberto Marinho, 37, resident of Morro da Providencia, was the one resposible for getting together participants for his community. “It was difﬁcult, because the people that aren’t involved in the evictions are scared to participate in anything,” he tells. Despite this, he formed two teams of residents directly affected by removals and bets that the teams will win the cup. “These people have already played together for a while, some of them played in the UPPs Cup and when I told them the nature of this event, they liked it. They are going to be able to play soccer and demonstrate the situation in which they are living.”

In Muzema, the president of the Residents’ Association, Leandro Correa, 32, said that people “are excited:” “I think the idea is great because it’s a way to unite the useful and the pleasant, or rather, the unpleasant because it’s about removals,” he jokes. For Maria do Socorro, of Indiana, the meeting also has a political content. “It is going to be good because various threatened communities are going to be able to converse and get together. The ﬁght has to be for all that are in this situation,” she declares.

A Lot of History to Tell

See below a brief proﬁle of some of the communities, and ﬁnd out how they have been marked by the avalanche of removals. According to the Mega-Events and Human Rights Violations dossier, in Rio alone close to 11,000 families may be removed on account of urban interventions connected to the Confederations Cup, the World Cup and the Olympics of 2016.

Morro da Providencia: Located in the Port Region of Rio de Janeiro, this place is a piece of the history of Brazil. Considered the city’s ﬁrst favela, the hill was occupied by soldiers from the Canudos War in the last years of the 19th century. Previously called Morro da Favela, the locale was the origin of the name “favela.”

The community’s drama started, ironically, with the Morar Carioca program, created in July of 2010 by the City government and part of the planning for the Cup. There are plans for the widening of roads, a cable car, a funicular tram and areas for touristic access. But, according to residents, there wasn’t clear information about the impacts nor any involvement of the community in the discussion of the project. Rio’s City government says 380 families have to be removed due to their location in areas of risk and another 291 families will leave to create space for the cable car and funicular tram. Rio de Janeiro’s Public Defenders’ Office managed to stop the works in October of last year because of the absence of an environmental impact study report and the lack of public audience with residents. The city authorities later managed to continue the cable car works, but the evictions are suspended.

Some houses, however, have already been spraypainted with the Municipal Housing Secretariat initials SMH, meaning they are marked to be removed. Residents have renamed the sign “Sai do Morro Hoje” (“Leave the Hill Today”).

Muzema: Close to Itanhangá, Barra da Tijuca, West Zone of Rio de Janeiro, the community is more than 30 years old and is threatened with removal on account of the dredging a canal closeby. However, according to residents, the canal has already been dredged several times and removal wasn’t necessary.

Indiana: Established in 1957, the Indiana community in Tijuca is a symbol of the dubious attitude of Rio’s city government. On January 16, 2012, residents received a visit from then Municipal Housing Secretary, Jorge Bittar, who promised works to improve the region; two weeks later, city representatives returned to the community to tell residents they should accept the offer of an apartment through the Minha Casa, Minha Vida program in Triagem, far from Indiana, or the “tractor would pass on top (of the neighborhood) for being a risk area,” according to Maria do Socorro, member of the Indiana Residents Association.

In October, residents together with the Public Defenders’ Office filed a lawsuit against the city authorities requesting the presentation of a technical report that proves the situation of risk. On December 10, 2012, a decision favoring the community was made ruling an immediate halt to evictions (already underway) and the removal of rubble. Until now, around 110 families have already been removed, some of them to the Minha Casa, Minha Vida housing units in Triagem. The 510 who remain want to stay. On May 9 of this year, the Public Ministry presented a report by Rio’s Secretariat of Housing afﬁrming that the region was of “low risk” and removal would not be necessary.