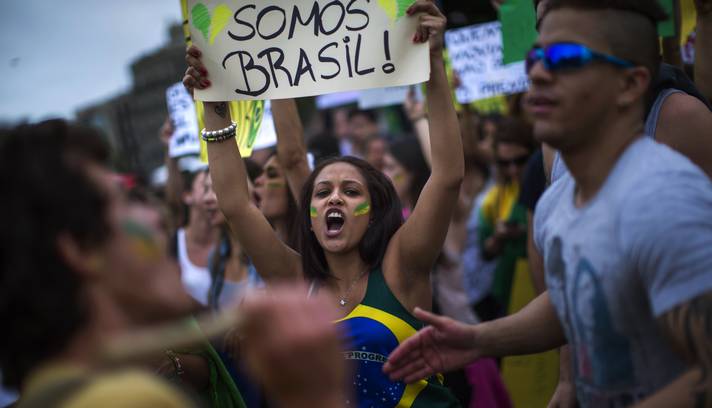 Anyone comparing countries can quickly conclude there isn’t a direct fixed relationship between economic growth and quality public services. Per capita income can be terrible while total national income is high. Economic growth can be high yet maintain widespread inequality. This is not a sustainable way to run a country, yet this is how things are and have always been done in Brazil, the last country in the Americas to abolish slavery and today the world’s 7th largest economy where 21% of the population is still under the poverty line. Brazil today is 106th in GDP per capita. We also rank among the worst in inequality, at number 17, although this is a significant improvement over the 1st place position we occupied two decades ago.

Despite the modest yet significant improvements in economic growth and reduced inequality of recent years Brazil suffers from horribly insufficient and inefficient public services, thanks to corruption and the lack of political will to prioritize their proper delivery. Transportation, education, and healthcare are woefully inadequate, and this is the basis for the protests that have spread across Brazil over the past week. 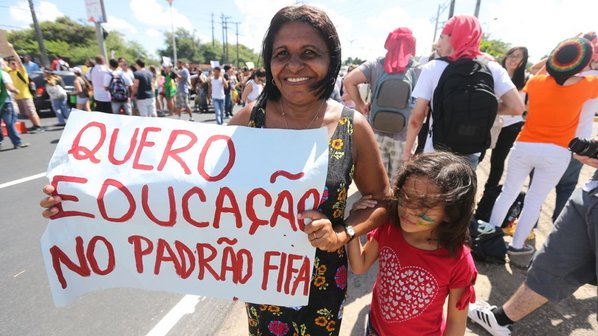 For example, though Brazil spends 5.7% of GDP on education, two-thirds of Brazilian 15-year-olds are incapable of more than basic arithmetic and half can’t draw inferences from what they read. The nation is ranked 53rd out of 65 in reading and science. With regard to health, Brazil spends 9% of GDP on health, yet ranks lower than comparable economies in Latin America on infant mortality, life expectancy and a range of other indicators. People are often sent by public transit from hospital to hospital for lack of access to beds. All this while we spend US$13 billion on the World Cup, more than the past three World Cups combined.

Transportation has been the banner of this movement and rightfully so. It represents mobility in the most literal of senses: the right to mobility which is also the right to the city, to collective decision-making, to opportunity, to justice. Rio and São Paulo have some of the highest bus fares in the world. 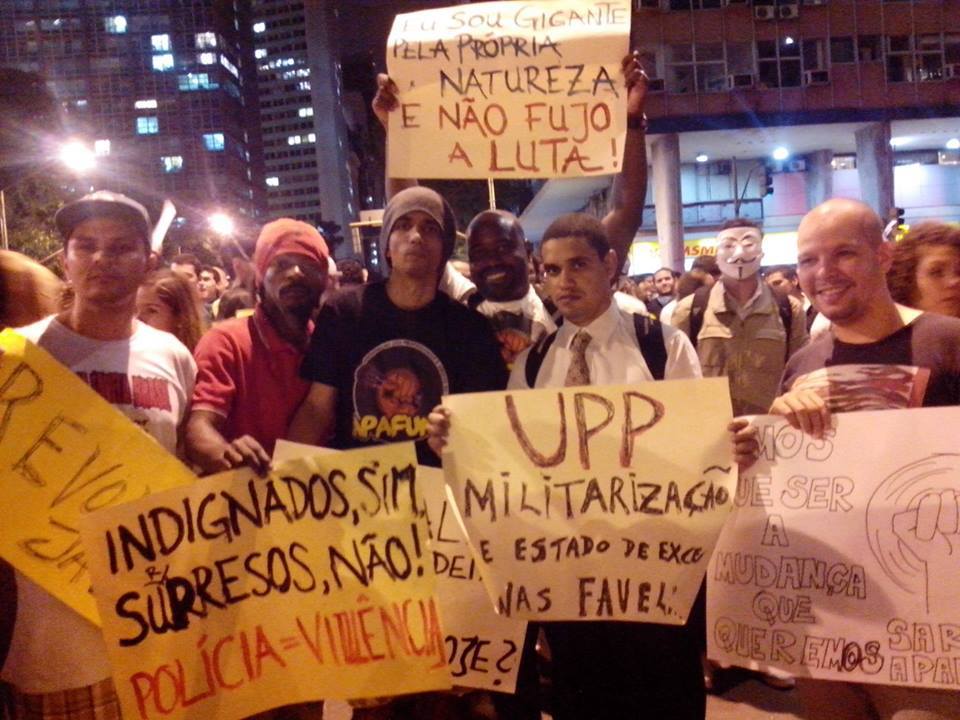 The largest protest so far was in Rio de Janeiro on Monday, which makes sense since Rio is bearing the brunt of current misspending as it prepares to host both the 2014 World Cup and 2016 Olympics. At least US$27 billion will be spent on the Olympics, all in Rio. The authorities’ city “plan” has been comprised of taking advantage of the mega-events to institute policies under the guise of ‘integration’ and ‘poverty reduction.’ In reality, however, they are fueling the expulsion of the city’s low-income groups, especially residents of the city’s vibrant and consolidated central or well-located favelas, to the urban periphery. It’s worth mentioning that these favelas have provided centrally located affordable housing to people for decades, in some cases over a century, and are well-developed residential neighborhoods. It is also worth noting that despite Brazil’s reductions in inequality over the past 13 years, in Rio de Janeiro inequality has remained much the same over the same period and continues to be among the worst in the world. 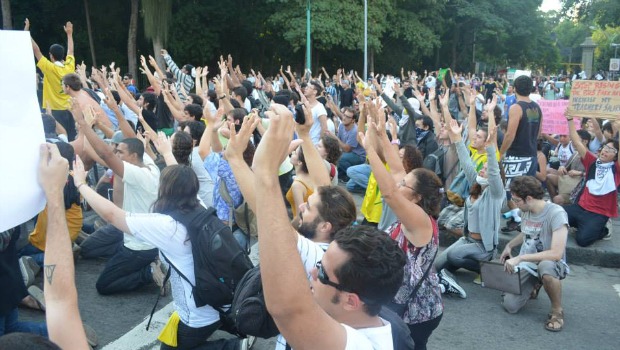 Fortunately we’ve reached the last straw. The protests have already forced a fundamental shift which won’t be dismantled or rolled back, no matter what politicians may wish. Thanks to social media–Brazil is the world’s second biggest user of both Facebook and Twitter, widely used by our 85% urban, young (41.5% are under 25) and highly sociable population–and the fact these protests have been decentralized, unaffiliated with political parties, and Brazil is, despite its growing pains, a democracy, it is likely the protests will intensify and persist indefinitely, as the political process undertakes the significant changes required of it.

We have reached the tipping point whereby civil society is organized, aware of its power and exercising it, and it’s being reflected in the change in rhetoric from politicians (after consulting with marketeers) and the mainstream Brazilian media, who have long ignored the restlessness and frustration that was clearly there. The scale and ubiquitous nature of these protests forced even traditionally conservative mass media outlets to cover them, offering extensive on-site live coverage, as if at a soccer game or samba parade. This is a huge shift, and the first time this has happened in Brazil, allowing a large segment of the population access to knowledge of the real motivations and peaceful nature of protesters which are rarely featured in Brazilian media. With all of this, the number of protesters continues to grow. 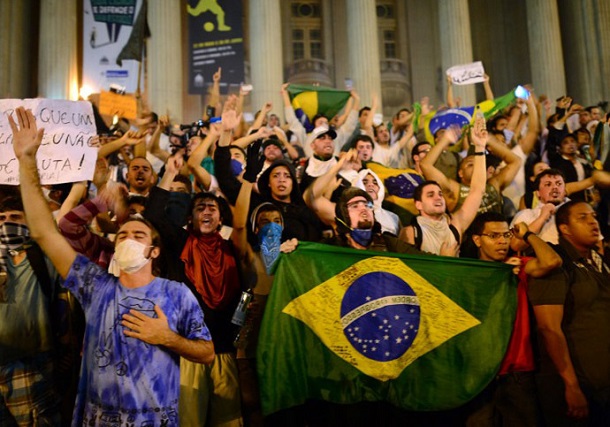 On June 19, in response to the protests, a city council member in Rio launched an application for a parliamentary investigation into Rio’s bus mafia and, later in the day, Rio and São Paulo announced bus fares are coming down (though being taken from the health budget). And in at least six cities (Porto Alegre, Recife, João Pessoa, Cuiabá, Paranguá, and Blumenau), small fare reductions have already taken place. These are tiny and initial victories and many more will follow.

The question now is whether politicians will realize there is no undoing this and the only path is forward into participatory democracy. An unwillingness to respond will see the movement grow and grievances continue to mount, with further delays in building the just and inclusive democracy we could, and should, model for the world.

Officials should acknowledge we’ve reached a new moment they are entirely unfamiliar with. As such they ought to take a humble position before their constituents, taking the time to listen, recognizing citizens not as walking votes but rather informed, aware human beings with real grievances and, more importantly, solutions.

For example, as this campaign began with the issue of mobility and is lobbying for a reduction in bus fares but, ideally, zero fares, such a policy should be actively debated. It has been instituted in a range of cities and would be incredibly empowering in the Brazilian context, facilitating everything from access to jobs to peoples’ ability to participate in the democratic process, all of which have and continue to be limited due to exorbitant bus fares.

Vehicles for participation and direct democracy, which some parts of Brazil already have a history of pioneering, need to be developed in recognition that we are not dealing with political parties but individuals, and that they need a direct voice. It is time democratic institutions follow their citizens and take advantage of the incredible opportunities for voicing and debating concerns, and developing solutions made possible by the Web. Could 20 cents lead to direct democracy? Brazil may just lead the way.

A shortened version of this article was published as part of the New York Times Room for Debate: Will the Protests Change Brazil?