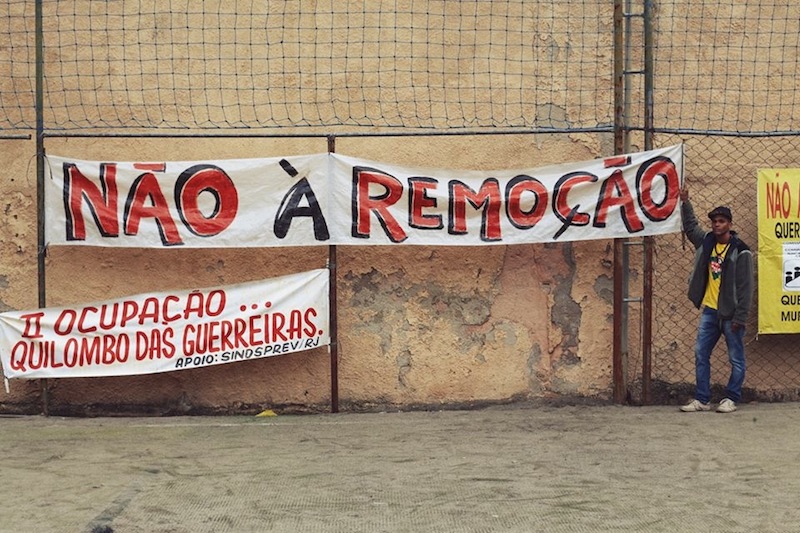 As the rain fell last Saturday June 15 in the Quilombo da Gamboa–not far from the corporate marketing campaigns and lavishly refurbished stadiums of the Confederations Cup–communities facing eviction participated in the “People’s Cup Against Removals.” Vitor Mariano, the tournament’s charming announcer, exclaimed on the microphone that “the objective of this Cup is to give a voice, to give time, to give space for those being excluded and for those being removed.” The inspired event was one of many in a series of diverse protests, meetings, and debates taking place in Rio de Janeiro over the past few months, culminating in the massive protests now gaining critical international attention. 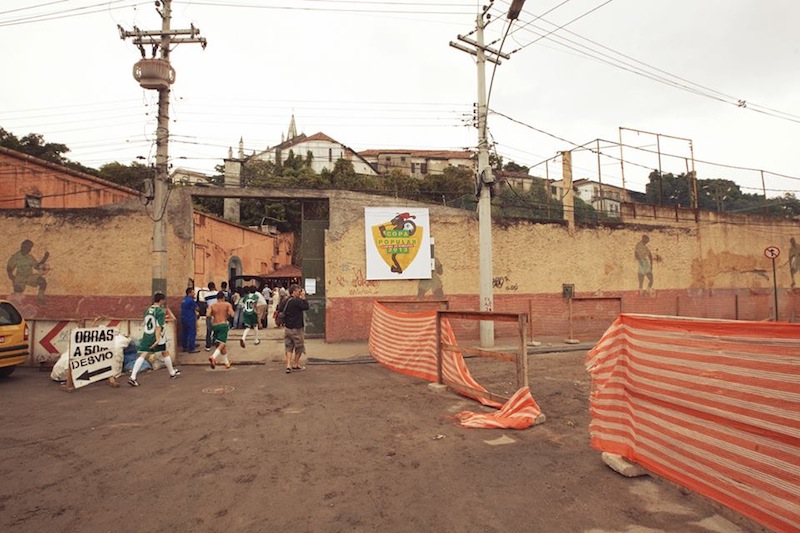 Organized by the Popular Committee for the World Cup and Olympics, the “People’s Cup,” had both strategic and symbolic objectives.

The first objective was to put these communities in contact with one another and to mobilize disparate community struggles into a unified articulation against evictions taking place across the city. Pablo Lima, a defensive player for the Vila Autódromo team, explained, “It is to show people that there are other communities in the same situation as us.”  Announcer Vitor went further: “the event’s objective is to bring together communities that are facing removal, not only because of the World Cup and the Olympics, but also because of the process of real estate speculation.” 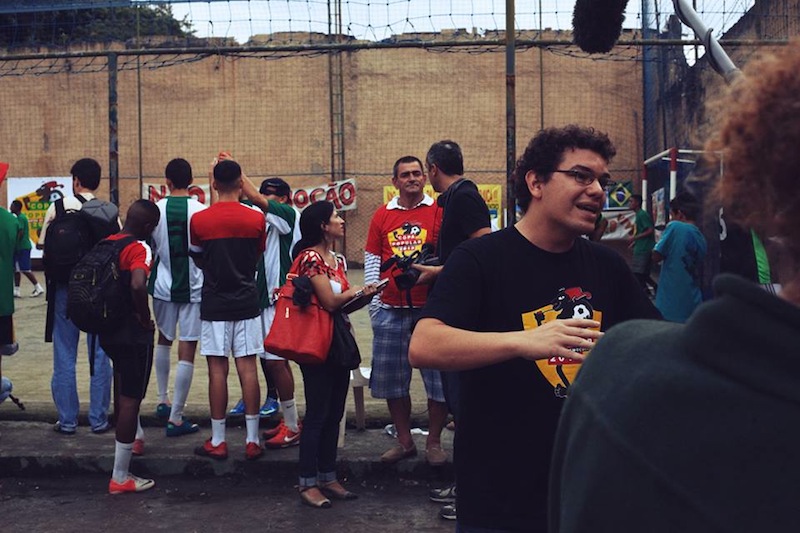 The second objective was for the tournament to serve as a symbolic counterpoint on the opening day of the FIFA Confederations Cup, reminding the international community that these seemingly festive spectacles are marked by pain and tragedy for thousands of families being removed across the city.

Popular Committee organizer Renato Consentino explained, “While the TV will be showing a beautiful game in a recently renovated stadium, there is another grave process taking place [which] violates human rights… and that affects close to 40,000 people in the city.” 11,000 people have already removed, another 29,000 currently are threatened. 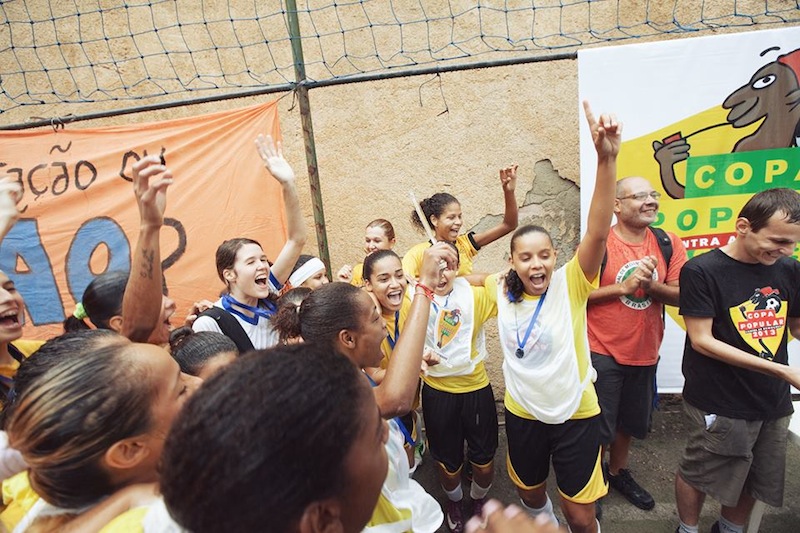 The all-day tournament had ten men’s teams and four women’s representing the communities of Providência, Santa Marta, Salgueiro, Indiana, Muzema, Vila Autódromo, and Vila Recreio 2, each competing for the title, while demonstrating “soccer as a form of protest” as well as fun. The first and second place teams from the tournaments were honored in a trophy ceremony after the games, and were given celebrity status by the Brazilian and international media in attendance who interviewed the players. Alaine Carla Souza Mendes, the 18-year-old star of the champion women’s team, Criciuma Salgueiro, said, “It was great participating in this event because it helps to spread women’s soccer to other communities […] and asks for greater participation from the government to help because many people are losing their homes.” And of course, the event wouldn’t be complete without a live musical performance and free barbeque to celebrate! 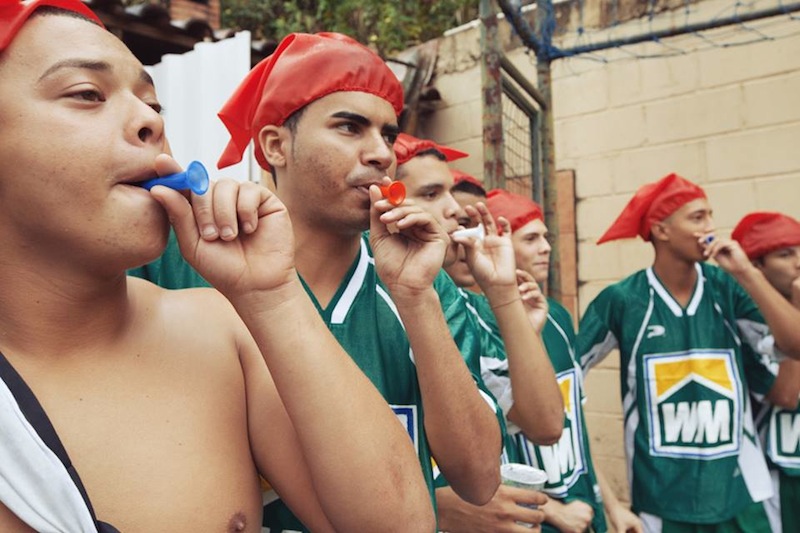 The tournament also launched Saci Pererê–a one-legged prankster and wish-granter from Brazilian folklore–as the official “People’s Mascot” and a challenge to the corporate branding and selection process of the FIFA mascot. In accordance with the idea of copyleft, photographer and author of the Saci design, André Mantelli explains, “The idea is that the informal worker has total freedom to commercially use this [mascot] on a shirt. Our desire is that this be freely replicated…The most important thing is that it gains visibility as an idea.”

The tournament highlighted a series of juxtapositions and contradictions intrinsic to Rio’s mega-event staging. Players and community leaders throughout the day reiterated a similar sentiment: “We want the World Cup, but it needs to be a Brazilian World Cup.” In essence, a World Cup that “could generate many improvements for the city, that could have effective popular participation,” explained Gustavo Mehl, another organizer for the Popular Committee. Instead, the series of projects underway in name of the 2014 World Cup and 2016 Olympics systematically remove communities and serve elite private interests. Altair Guimarães, president of the Vila Autódromo Residents’ Association explained that the land where his community is located has become the “apple of the eye” of real estate developers and the city. He said, “I’ve worked 58 years of my life in this city. I have the right to choose the place where I live. It is not the Mayor that has to say where I live.” 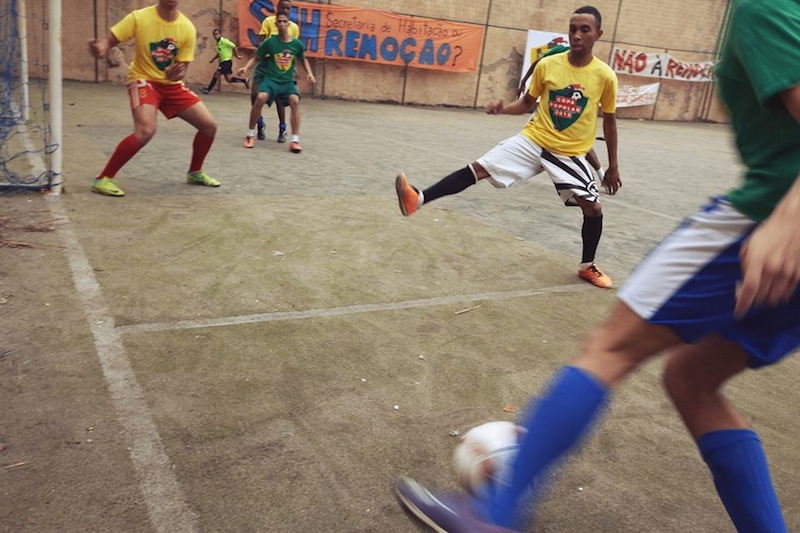 Even the community space where the tournament was held juxtaposed the FIFA spectacle. As Chris Gaffney, visiting professor in Urbanism at the Fluminense Federal University and member of the Popular Committee, explained: “This is real. This is what the everyday experience of football is in a place that’s got holes, that’s got a terrible field, it’s in the rain and there are guys here just enjoying themselves and expressing themselves through football. There’s no consumerism, this is just people getting together to resist and to use football as an expression of their discontent but also their content. People are happy to play football. This is what this thing means.” This spirit stands in opposition to the new character of the Maracanã stadium, according to the Popular Committee. They have also been protesting the recent privatization of Maracanã, historically a symbol of democracy and access to public space in a city otherwise marked by extreme class divisions.

The People’s Cup was much more than a tournament to protest forced evictions in the city of Rio de Janeiro; it was also a form of creative resistance that challenges the culture of FIFA. While the staging of the World Cup is corporate, consumer-driven, and privatized, the Popular Cup exuded a spirit of openness and democracy, giving a voice to those disenfranchised by the events themselves.