Click here for the original editorial from Observatorio de Favelas, in Portuguese. 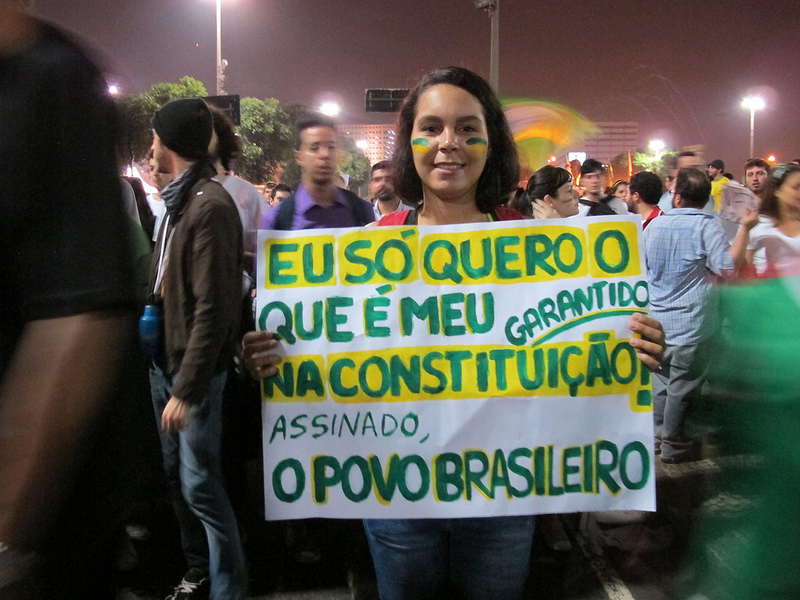 It’s been a long time since so many Brazilians have taken to the streets. In major cities more and more people are turning out. On June 17, Rio de Janeiro saw its second demonstration of more than 100,000 people. It looked like 1968 again on Avenida Rio Branco, with new banners and new faces. More than 300,000 people came out for the demonstration of June 20. The Observatorio de Favelas (Favelas Observatory) feels a part of this great autonomous people’s movement, which has mobilized more than a million people across Brazil.

The protests began as a demand for lower bus fares but quickly mushroomed. Countless groups got involved, from many sectors of society and from across the political spectrum, bringing diverse goals and demands. The military police proved itself incapable of handling the protests. Trained in repression and confrontation as if in a state of war, the police is an inefficient instrument for dealing with social conflict in a state of law. The unacceptable acts of repression set into motion a spiral of misplaced and disproportionate violence throughout the country. On June 20 the police behaved as if they were in a war zone and treated the people as the enemy. The mistakes that have historically affected the favelas and the outskirts of cities were acted out in the city centers, primarily in Rio de Janeiro. The police, oriented in the logic of conflict, used weapons better suited for war, violating rights and increasing the potential for violence and hatred in the cities.

The Observatorio de Favelas stands against any form of violence. The State should be held accountable in a firm and unequivocal way for its conduct, which only served to elevate tensions and confrontations around the country. There is no possible positive scenario given the degree of violence used; and we cannot compare the violent actions of those who control the State with those of individuals in civil society. The State and those who govern should guide the police’s actions and take responsibility for them. The State cannot act with violence. It should protect the people in the streets and not incite fear. The government’s response should be accompanied by actions that demonstrate a real retreat from measures taken against the public. They should certainly lower bus fares. However, the cost of “not raising” fares must not be absorbed by the State, but by the executives who are already making loads of money on transport. This is an urgent and immediate measure that partially responds to the demonstrations.

This should be accompanied by plans to guarantee mobility, socially and symbolically, across the city. The Observatorio de Favelas takes the position that the movement that has erupted should be understood by both the government and public as positive, with symbolic challenges and with the goals of reducing inequality and expanding democracy. 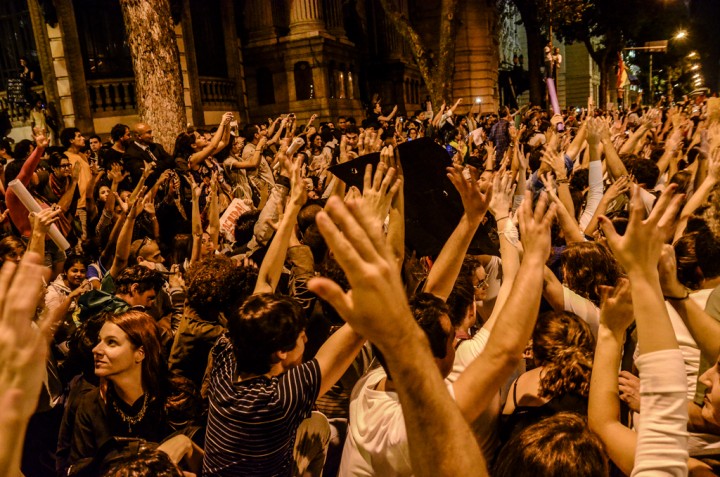 The profusion of social issues, banners, goals, propositions, and actions that have emerged in the movement should not serve as an obstacle to understanding the moment the country is transiting. There is a profound questioning of institutions. The declarations against politicians and political parties challenge the means of control of the State, governments, parliaments, and legal system. The public outcry strips representatives of their credibility and demonstrates the weakness of a model that takes power away from civil society and concentrates it in the hands of the State. Clearly it is necessary to create instruments that facilitate active participation by civil society, with social controls, transparency and expansion of democracy. Putting information from the city, state, and federal levels in straightforward portals, with free access, containing objective information which is transparent and easy to understand–this is a possible and necessary measure that should be taken immediately. Citizens should have access to all public information through the many tools and technologies available in the 21st century.

The inequalities spread across the national level are unambiguous and generate profound confusion in the absence of open channels of information, control and participation from society. Society as a whole suffers from this, not just a single politician. Hence political leaders should pay attention to this moment. Political reform focused on an expansion of democracy, transparency, and clear spaces of social control are urgently needed.

An institutional crisis is underway. In question are all of the country’s rules and institutional practices. To recognize the current barriers and overcome them is fundamental to the democratic development of the new culture that is sweeping Brazilian society.

It is past time to hear what is explicit and implicit in the acts of protest, and the expansion of democracy, with real participation by civil society, is the path the Brazilian state urgently needs to take. What combats violence are solid measures tp strengthen the public sector, investment in services, expansion of democracy, and real transparency of information. Such measures could lead to cultural and symbolic advances, with an improvement in the quality and conditions of life. What we are confronting in the demonstrations and marches is the inequality that tarnishes the country.

Soon political leaders will recognize the moment, present reforms to expand democracy and economic equality, with transparency and clear spaces of social control. To recognize and elevate participation by civil society is the way to avoid collapsing into a general institutional crisis.

The streets cry out ever more eloquently, and now, explicitly: we want a new Brazil, more democratic, egalitarian, and respectful of individuals and civil society.